I walked the Portland Marathon today, though the last few miles almost killed me. Pam asked for a race report, so I’m going to write one, even though this was far from a “race”. (Pam is an ultramarathoner and just completed a hundred-mile run, so a marathon is nothing to her. She would have finished second.)

In 2008 and 2009, I’ve spent my April through June training to run the marathon, but I keep getting hurt. My injury this year healed at the end of August, and it occurred to me that although it was too late to train to run the course, maybe I could walk it. Since I’ve been trying to walk 5-10 miles every day this summer, I decided to give it a go. I registered.

Last week, I put out a call for volunteers to walk with me and got three offers to help. So this morning, promptly at 7 am, I lined up to walk the marathon. (As I was waiting to start, I realized I had forgotten to eat breakfast. How stupid is that? Answer: Pretty damn stupid — but it didn’t seem to matter.)

How did I do? Well, when I walk through my neighborhood — reading books as I go — I average a 17-minute mile. That seemed like a reasonable target, so my goal was a seven hour, 26 minute marathon. I actually finished in 6:54:07.

My chip time was actually 7:01:25. Because there can be a 15-minute delay between when the first runner and the last walker cross the starting line, every marathon participant wears a microchip. At various intervals on the course, there are mats to record your progress. This chip time is your official time. But chip time doesn’t account for bathroom breaks, stopping to change socks, etc. My GPS watch automatically pauses when I stop to do any of these things, so that’s the time I use. It really doesn’t matter, though. Whether my time is 6:54:07 or 7:01:25, I’m proud of finishing.

Here are my official results: 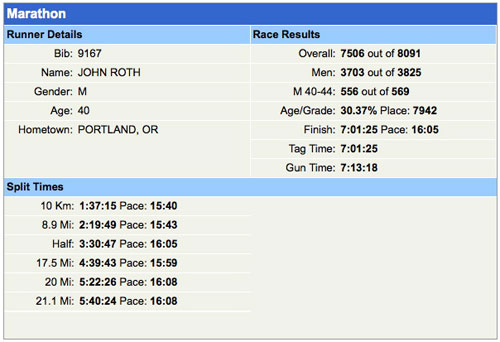 Look at that! I finished 13th from bottom for my age and gender. You know what? I don’t give a damn. Here’s the data directly from my GPS watch: 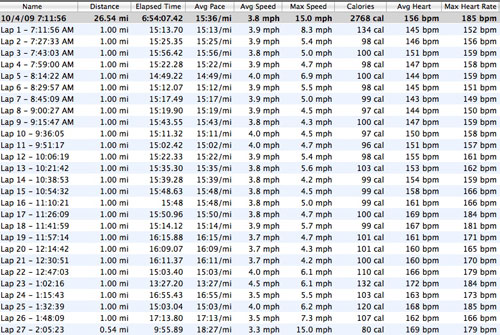 You’ll note that my GPS watch clocks a distance of 26.54 miles, which is longer than the 26.2 miles in a marathon. There are several reasons for this:

How did the race go? It was the best of time, it was the worst of times.

Chris Guillebeau walked with me for the first nine miles. He spurred me ahead while we talked about blogging and world travel. I had a great time. The first mile wandered through downtown, up Salmon to Broadway to Davis. After a mile, we turned south on Front. We walked south on Front for about two miles, including a modest incline. At about 3.5 miles, we turned and headed back north on Front. This entire time, we aimed for a 15:15 pace, which was well ahead of the 17-minute pace I was aiming for.

The ninth mile looks a little slow, but that’s because it includes a portapotty break.

At mile nine, the course doubled back on itself, heading back down Front. Chris left to run home, and I was joined by Paul and Tiffany. Their fresh legs pushed me to some solid times. We walked briskly and chatted about life. They invited me to dinner tonight, but I declined. I told them that if I finished, I was going to eat chicken wings with Mac. They left me after five miles, just past the 14-mile marker.

By this time, my feet were sore. Very sore. I’d brought two pairs of socks, and had already tried all possible permutations with them, but there was no doubt that I had terrible blisters on both heels and on my right pinky toe. I pushed on, trying to ignore the pain.

From mile 14 to mile 18, I walked alone. To distract myself, I posted to Twitter and Facebook (yes, really) and listened to high-intensity dance tunes. Though my mental stamina was flagging, I kept at it. I marched up the appraoch to the St. John’s Bridge (mile 16), passing tons of walkers. I was having a good time. On the way down the bridge, I even jogged a little.

But by mile 18, my mental and physical reserves were beginning to flag. My feet were killiing me. How could I last another 8.2 miles? 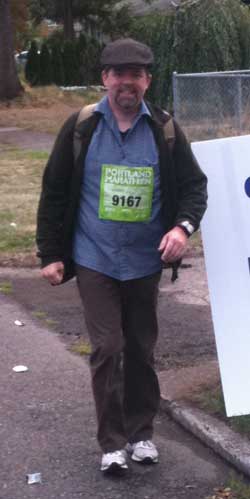 How? With the support of Mackenzie Smith. Mac joined me at about mile 18, and he kicked my ass. As I whined about my ailments — “oh my feet”, “oh my shins”, “do you have any ibuprofen? any hydrocodone?” — he just kept on walking. At first, he let me set the pace. But when I started to flag — and boy did I start to flag — he walked slightly ahead of me, tacitly goading me to keep up.

Mac and I were fortunate to have two long downhill sections, and we jogged down both of them. Because I was wearing street clothes (yes, really), I looked foolish jogging, but I didn’t reall care. The change of pace felt like heaven on my feet. (You can’t really see our first jog because it’s absorbed in miles 21 and 22. But you can see the second jog in mile 23. I did a 13:27 mile! That’s about what I would have aimed for if I’d run the marathon.)

During the last couple of miles, I was in dark black place. If Mac hadn’t been there, I would not have finished. My feet hurt like hell. But Mac was there, and I did finish.

After the race, I took off my shoes and socks. I had gigantic blisters on both heels, as well as various other blisters around my feet. (Some are actually double blisters.) As Mac watched me put my shoes on, he stopped me.

“Wait a minute,” he said. “How tight do you have those tied?”

“Pretty tight,” I said. I showed him.

Mac laughed. “Dude, you need to loosen the laces. No wonder you’re in such pain.” I loosened the laces. The pain wasn’t gone, but my feet felt much better. I realized he was right. No wonder I was in such agony.

According to my “body bug” fitness monitor, I burned just under 3500 calories during the marathon. Some of you will understand that 3500 calories is roughly a pound of body weight. By walking a marathon, I only lost a pound. Good grief.

As I write this at 6pm, I’ve burned 4844 calories. I’ll end up having burned about 5500 calories for the day. Cool, huh? That makes up for the chicken wings I had with Mac, and the pork rinds and alcohol I consumed since returning home. But you know what? It’s nothing compared to the contestants on The Bigger Loser. The women aim to burn 6000 calories per day, and the men aim for 8000. Yes, they’re much larger than I am, but still…

Anyhow, I’m proud to have finished this race, but I’m glad I can cross this off my life goals list. I’d still like to run a marathon sometime, but it won’t be next year. Maybe in 2011?

Footnote: Call me crazy, but hours after finishing the race, I’m still wearing the finishers’ medal around the house, even though I’m all by myself this weekend. I think I’ll even wear it to bed. (I plan to go to sleep early.) Update: Did wear it to bed. Still wearing it the next morning…