Last summer on our drive across England, we stopped at Jane Austen’s house. The inside was okay, but mostly I found it a little boring. A house is not a house when there’s nobody living there. It’s an empty shell of a thing — a museum.

But I found I loved the gardens.

In the U.K., what we call a yard is called a garden, and it comprises not just shrubs and flowers, but the lawn as well. In the case of Jane Austen’s house, the garden included a large carefully-maintained lawn, a variety of old trees, and lovely secluded spots. I was entranced by these lovely secluded spots.

“You know,” I said to Kris. “I think we could create a spot like that at Rosings Park.”

“In the front border bed,” I said. She was skeptical.

When we returned in early August, I fought my way through the laurel and azalea to see if I could indeed create a lovely secluded spot. To my surprise, there was a relatively large opening in the midst of the front border bed. Or there could be. When I first looked at it, it was covered with English ivy, and crowded in by laurel, lilac, and holly. The ivy itself was covered with a couple decades of twigs and branches.

Last autumn, I made a half-hearted effort to clear the space. Mostly, I just pruned the big holly by the sidewalk. Then I let the idea lie dormant.

After gestating for nine months, the idea has finally, well…that’s a metaphor that’s been stretched too far. Let’s just say that over the weekend, Kris and I did a lot of yardwork. One of our top tasks was to weed the front border bed, and to do that, I had to climb back into my secluded spot. This time, the possibilities were much clearer.

This afternoon I grabbed a rake and a hoe and my pruners. I spent an hour raking twigs, pulling up ivy, and clearing debris. When I’d finished, my secluded spot had begun to take shape.

The space is roughly circular, maybe fifteen feet in diameter. It is completely enclosed by shrubs and trees. Dappled sunlight filters through the leaves overhead, and all around is a wall of trunks and limbs. At two locations one can see clearly outside The Grove (as I have come to call it):

I’ve been sitting in The Grove for the past half an hour. It’s wonderful. People pass by on the street, and they do not notice I’m here. Though it’s a warm day, it’s cool beneath the trees. It’s peaceful. The only drawback so far are the goddamn mosquitoes. 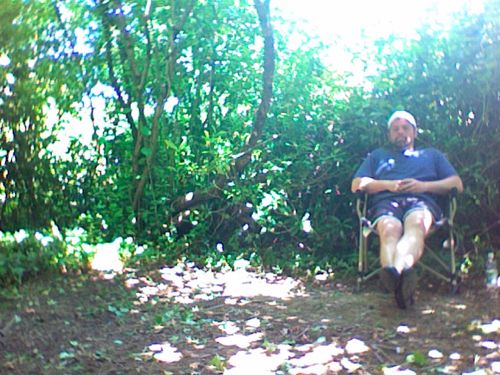 Now I have to decide what I want to do with this lovely secluded spot. My first idea was to put down a layer of pea gravel and then install some wrought iron furniture. That seems like the proper English thing to do. But after further thought, I wonder if there might not be other possibilities.

Should I install a fire pit? Should I find some sort of soft surface? (I can imagine how awesome it would be to do daily yoga in The Grove.) Should we opt for a picnic table? Is it best to level the space? (There’s a slight slope.) How can I screen the road from view?

There are many possibilities. I’m not sure where to even begin looking. All I know is that this idea, which seemed a little crazy at first, will come to fruition, and soon. Of all my pipe dreams — Mini Cooper, Stickley furniture — this is the one that will be most satisfying to achieve, and the cheapest to do.

I can’t wait to have a lovely secluded spot to call my own.

Bonus! As I was editing this post, Sammy (or friendly blue jay) fluttered into The Grove and came hopping up beside me. I could have reached out and touched him! He was apparently after a peanut I had unearthed while clearing the space.