Even after several days in Cape Town, our vacation wasn’t over. Kris and I could look forward to 36 hours of travel before we were snug in our beds in Portland. Maybe more. And since I had a hare-brained scheme to make the Portland auditions for The Amazing Race on Saturday morning, we were eager not to miss any connections.

Security Theater
We left the hotel for the Cape Town airport at 10am local time — or 1am back home. Our flight to Johannesburg was uneventful, but once there, we had a couple of small adventures.

First, Kris and I got cranky with each other. Really cranky. I know some folks like to pretend they never get cranky with their partners, but Kris and I do sometimes — especially when she’s hungry. And especially while traveling. (We have different travel styles, which creates some conflict.)

Second, security to board the plane back to Dulles was ridiculous. How ridiculous? I took notes.

I’ll leave it for you to decide whether this security is worth anyone’s while. But suffice it to say that nobody standing in line thought it mattered. It was a hassle, and yet it seemed ineffectual at the same time.

The Amazing Race
Our flight to Washington D.C. landed on schedule at about 6am Eastern. From there, we caught an 8:34am flight to Denver, and then made a tight connection from Denver to Portland. After 36 hours of travel, we reached Portland just after one in the afternoon.

But the fun wasn’t over yet!

Thanks to some co-ordination from Tiffany, she and Paul helped Kris grab our luggage and head for home. I, on the other hand, met up with my pal Chris Guillebeau, hopped in the Mini, and zoomed to Lake Oswego. We had a date with destiny!

As most of you know, for the past year, Kris and I have been obsessed with The Amazing Race, a television reality/game show in which teams of two race around the world for a one-million-dollar prize. Over the past twelve months, we’ve watched all seventeen seasons. Kris has watched most of them two or three times.

Because of my new-found love for travel, the idea of running The Amazing Race is very appealing. But as much as I’d love to do the race with my wife, it’s probably not a good idea. Remember the start of this post? Remember how I said she and I bicker, especially when traveling? And especially when she hasn’t eaten? Well, we’re both certain that doing The Amazing Race together would be a recipe for disaster.

Instead, I asked Chris Guillebeau if he’d like to do it. He’s — reluctantly, I think — agreed to audition with me.

Note: Chris is a natural fit for this. One of his goals is to visit every country in the world by the time he’s 35. With just two years left, he’s almost there. His experience traveling and my knowledge of the race could make us a formidable team. Plus, it’s be fun to see us billed on the screen: “Chris and J.D., professional bloggers”. On the other hand, I’m fairly certain he has no clue what he’s getting himself in for. He might hate it! (That’s why I have back-up partners in my mind: Michael H. and Andrew C.)

The auditions were scheduled to run from 10am until 2pm. It seemed unlikely that we’d make it in time to be seen, but we figured it was worth a try. And it was. When we arrived at the restaurant where auditions were being held, there was still a long line, and the audition time had been extended until 4pm.

It was bitter cold outside (a shocking change from the warm summer Cape Town days we’d just left), but Tiffany had brought my jacket and gloves to the airport. (Thanks, Tiff!) Chris and I took our place at the end of the line.

Almost immediately, Mr. Unconventional began looking for ways to get us near the front of the line. And he found one. Those who’d been in line longest had been issued tickets. As people gave up and left, one fellow was collecting (or buying) the unused tickets. He then resold the tickets to people further back. Chris found this fellow and brought him to me. I paid $50 to move to the middle of the pack.

And then we waited. 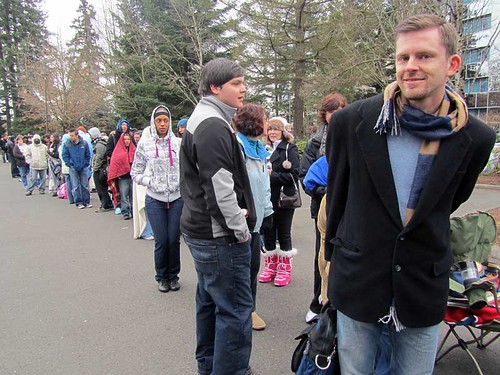 It was cold. The line moved slowly. We made idle conversation with our neighbors in line. And we waited. Eventually we received some bad news: The process was taking too long and the line was going to be cut here, far far ahead of us, and everyone else should go home.

“We can’t give up now,” Chris said, and others around him agreed. He prodded me to go speak to the fellow who had made the announcement. I did. And then I learned the terrible truth.

You see, The Amazing Race has a normal audition process that goes something like this:

It’s an open-ended application process, and anyone can apply at any time.

Well, this audition for which we spent hours standing in the bitter cold was nothing more than the normal application process, but handled by the local television affiliate. There was no advantage to applying this way. In fact, if anything, I believe there was a dis-advantage to doing so. When you film yourself, you can try again and again until your audition is just how you want it. There was no chance to do that with the audition at the restaurant. This was just a publicity ploy.

Chris and I packed it up and headed for home. I’m grateful that he took several hours from his busy schedule to stand in line with me, especially since The Amazing Race is not his dream — it’s mine. But we’ll have to send in our application through normal channels. (And if Chris doesn’t really want to do it, I’ll try to recruit one Michael Hampton to join me.)

Final Thoughts
Kris and I loved our African vacation. We’ve been back for a month, and we think (and talk) about it constantly.

When I first started to travel, everyone told me, “Oh, travel is amazing. It changes you.” I thought this was mostly bunk. Our trip to Belize was interesting, and it’s stuck with me, and our trips to Europe have been fun. But change me? Venice didn’t change me. Paris didn’t change me. So, going into this trip, I was skeptical that Africa would change me.

I was wrong. Africa did change me. It opened my eyes and my mind. I now know what people mean when they say that travel can change you. If it was practical, I would pack today and return to southern Africa. I’ve spent many hours over the past month talking with people and reading websites, learning everything I can about volunteer tourism. I’m trying to find organizations that do good without a religious or political agenda.

Though it cost a lot of money, I’m richer for having gone to Africa.

And speaking of richer, here’s a final bit from our trip. We spent several days in Zimbabwe, which is a beautiful country with beautiful people. It’s also a country ravaged by political and economic turmoil. In fact, a few years ago, Zimbabwe was hit by hyper-inflation — the rampant de-valuing of its currency. As a result, the government had to print more and more money in higher and higher denominations.

As we were crossing the border into Zambia, our tour bus was besieged by hawkers. “Please don’t buy from them,” our tour guide told us. “It only makes them bolder.” Our group was fairly good at first, but then one by one, we succumbed. Kris was drawn by a chance to pick up trillions of dollars. Literally: 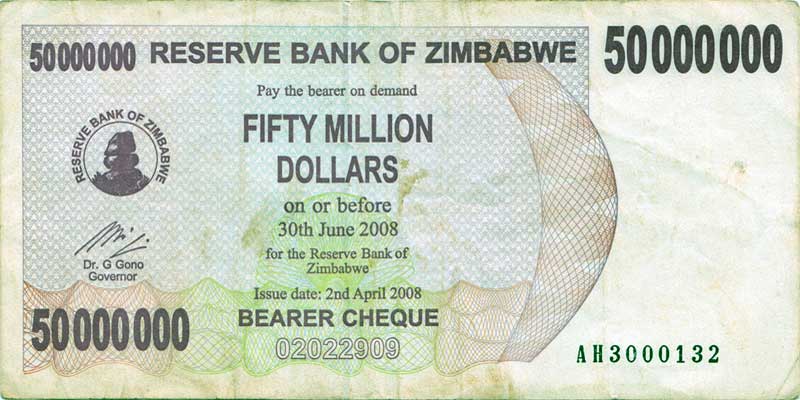 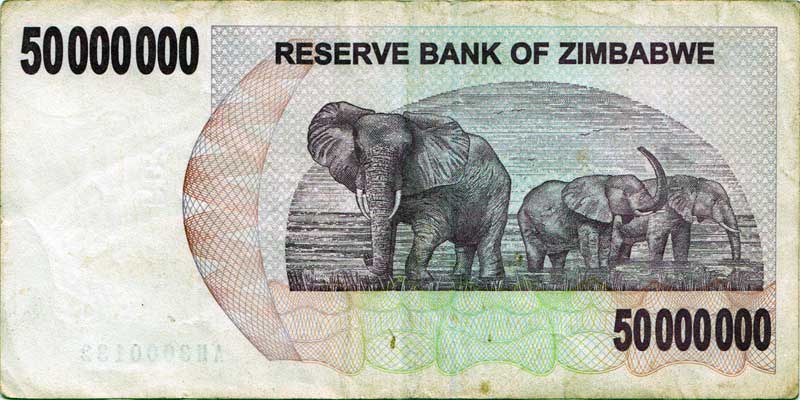 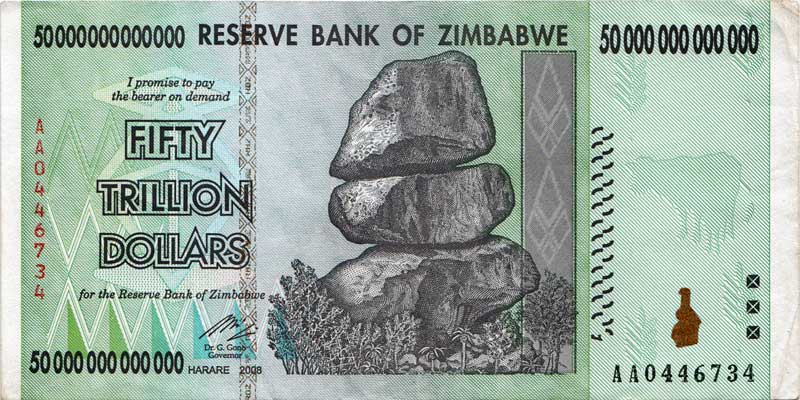 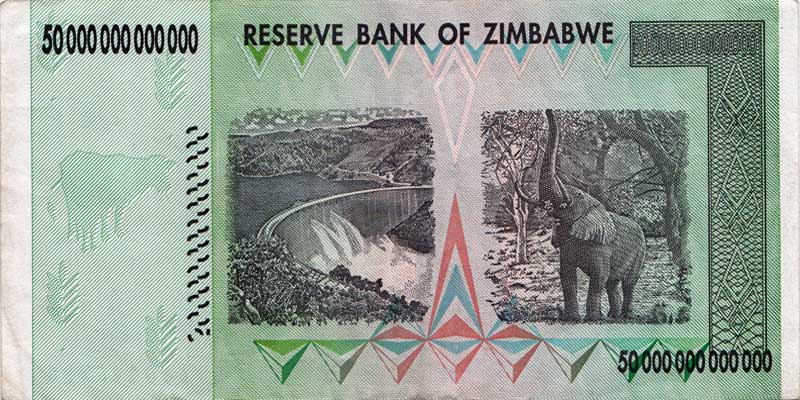 These are scans of Zimbabwean currency issued during the period of hyper-inflation. How much are they worth today? I think Kris paid a buck (maybe two) for each banknote, and even that was probably too much. That’s okay, though, because the memories are priceless.