After three weeks in Africa, Kris and I have returned for the cozy confines of Rosings Park. There was one less cat to greet us this time — which makes me very sad — but it’s good to be home just the same.

We had a great time on our trip, and I took many photos and filmed several hours of video. Rather than regale you with a day-by-day account (and as I have with vacations past), I’m going to get smart and lump major destinations together. So, in the coming days, you’ll get to read about:

It’ll take me some time to piece together each travelogue, but I hope to keep them just a couple of days apart. I’ll post-date them, as you can see. This entry is dated February 10th, even though it’s being published on the 28th.

Note: This is actually the second part of this vacation journal. The first part detailed what I packed for Africa.

Before we’d even left the U.S., I made my first mistake. I decided that I wanted to buy some South African rand so that I’d have a little spending money. At Dulles International Airport in Washington, D.C., I paid $310 (and a $9.95 commission) to purchase R1800, for an exchange rate of about R5.63 per dollar. At OR Tambo International Airport in Johannesburg, other members of our group were buying getting R7.10 to the dollar (with a R49.95 commission). My $310 would have bought me R2151 in Johannesburg, which is the equivalent of R6.94 per dollar.

Our flight from D.C. to Johannesburg was long — 17 hours long, including a re-fueling stop in Dakar, Senegal. I slept very little (because it’s almost impossible for me to sleep on planes). So, after taking the 18:30 bus to the hotel, Kris and I immediately crashed, sleeping from 20:00 to 01:00. We both woke for a couple of hours (and watched Downton Abbey on the iPad) before falling back to sleep at 03:00.

In the morning, we ate a quick buffet breakfast — the first of many buffet meals — before boarding the bus for a tour of the Johannesburg area.

Note: Our bus was apparently the Kaizer Chiefs team bus. (The Kaizer Chiefs are a powerful soccer team based in Soweto, a Johannesburg township.) As a result, everywhere we drove, people (especially young men) smiled and flashed us the “v for victory” sign. Well, except for the folks who support the Orlando Pirates, another Soweto-based team. 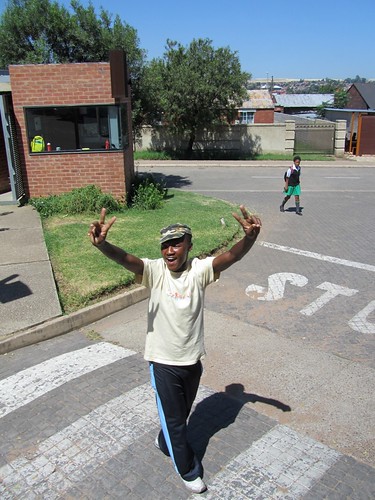 Our three-week tour was led by Brian, a native South African. He provided a lot of background and “color” to the trip, which made things more interesting.

For example, he started by talking about race. Following nearly 50 years of apartheid, race is an unavoidable issue in South Africa. The logic behind apartheid was “separate development”: Blacks and Whites lived in different worlds. (Colored people — meaning those of mixed races or from other countries, such as India — inhabited a middle ground.) 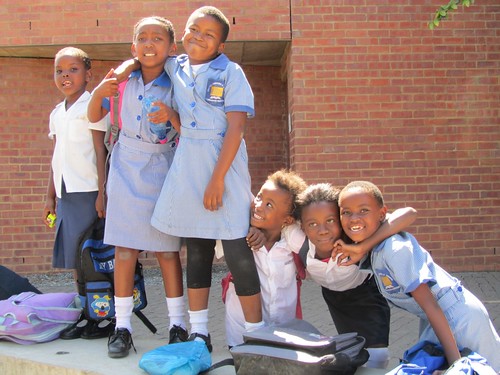 In South Africa (and Zimbabwe), all schoolchildren wear uniforms.

But Brian says that race is less of an issue than it was in the past. South Africa is known as the Rainbow Nation, and the people take pride in their multi-racial culture. (On the trip, I did a lot of reading about Nelson Mandela, who actively promoted racial harmony, even though he had valid reasons to hate the Whites.) Because there are diverse races and political opinions, people have learned to get along. Brian says that people who disagree politically can still be good friends.

Note: South Africa has eleven official languages, though nearly everyone speaks English (and all of the signs are in English). Because there are so many languages, everyone speaks with a different accent. Dutch descendants, like our guide Brian, speak with something very much like an Australian accent.

As Brian gave us background on South Africa, the bus wound its way north to Pretoria, the country’s administrative capital. (South Africa has three capital cities. Cape Town is the legislative capital, and Bloemfontein is the judicial capital.)

We stopped briefly at Church Square before driving up the hillside to the Union Buildings, the official seat of the South African government (and nominally the home of the country’s President). Kris and I spent our time wandering the lovely gardens, looking at the birds and flowers, and enjoying the summer sun. The sweet scent of one flower (we couldn’t figure out which) reminded me vaguely of the orange blossoms in Belize. 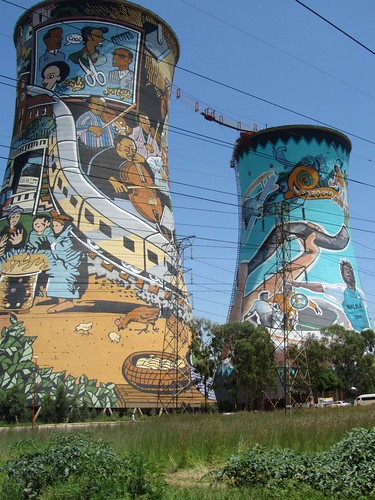 Orlando Towers in Soweto. As seen on The Amazing Race!

After Pretoria, we drove to Soweto, where we picked up S’nothilie, our local guide. We drove through East Orlando, then stopped in West Orlando for lunch at Sakhumzi, where we enjoyed an African buffet and blueberry ice cream. Well, I enjoyed the lunch. Kris was sick. She’d picked up a bug somewhere along the way, and couldn’t keep food down. She was miserable on this day (and then again two days later).

After lunch, we visited the Nelson Mandela House, which is just across the street from the restaurant. 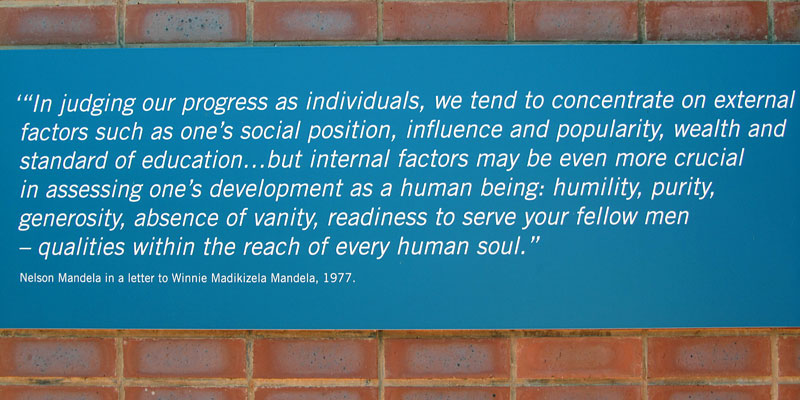 From outside the Nelson Mandela House

Next, we drove a short distance to the Hector Pieterson Museum. Hector Pieterson was thirteen years old when he was shot and killed during the 1976 Soweto uprising against the apartheid government. An iconic photo of Hector being carried by another boy sparked worldwide protest. This museum was fascinating, but we had very little time to visit it. (Note this complaint. It’s one I’ll have again and again. We saw a lot of stuff on this trip, but we were never allowed to linger at any one place, which sucked.)

Soweto was interesting. It started as a township for Blacks drawn to Johannesburg to work on the gold mines. (Soweto is an abbreviation for South Western Townships.) Black and White were kept separate, even before the official policy of apartheid. Though the area’s origins are poor, and many poor people still live there, especially in the “informal settlements” (which most people know as shantytowns or squatter camps). Now, though, there are homes with Mercedes and Lexus cars in the drives. Brian told us that Soweto has more millionaires than any other South African city.

As a result, driving through the townships — both in Johannesburg and later in Cape Town — was an adventure in contrasts. The rich and the poor live side by side. 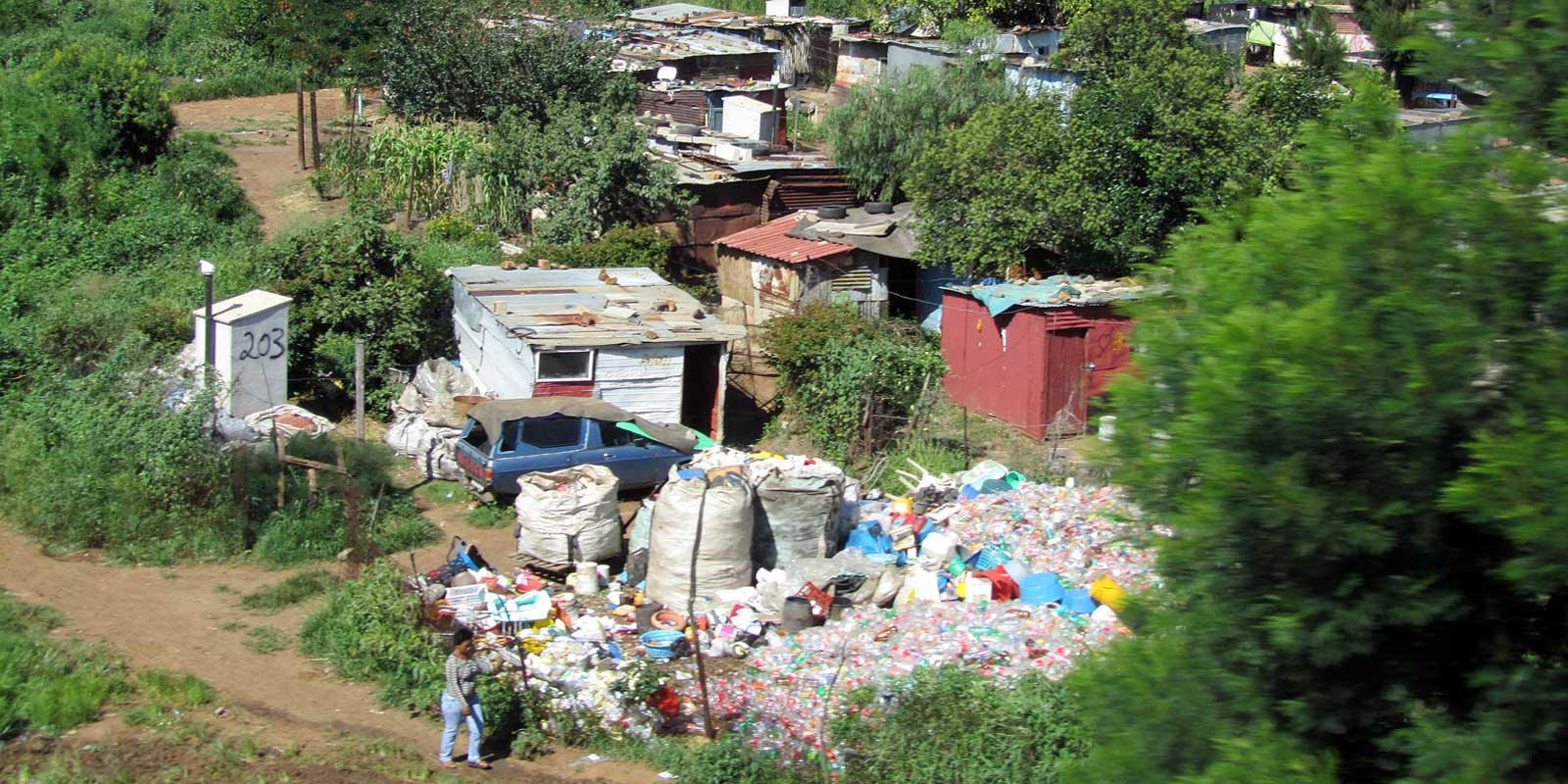 A typical shantytown in Soweto. Click to enlarge image.

In the afternoon, we returned to the hotel. I swam while Kris rested. In the evening, we had a big welcome dinner, where we sat next to Jerry and Suzanne. Jerry is a former airline pilot, and Suzanne is a former flight attendant. During the late 1990s, they lived for three years in London, followed by a year in Paris. They loved it. The four of us talked about books, photography, travel, and more.

After a long first day in Africa, Kris and I hit the sack, ready to rise early to board a plane to Zimbabwe.

Note: One commenter on my last post complained that I was using the term Africa to refer just to one country (or a handful of countries). “It’s downright weird and part of the legacy of racism and America’s views about Africa,” she wrote. I disagreed in a reply to that comment, and after spending three weeks in Africa, I disagree even more. The people in Africa — in all five countries we visited — also use the general “Africa” all the time, even when they mean just one or two countries. “Welcome to Africa”, “In our African culture…”, “In Africa, we…” and so on. 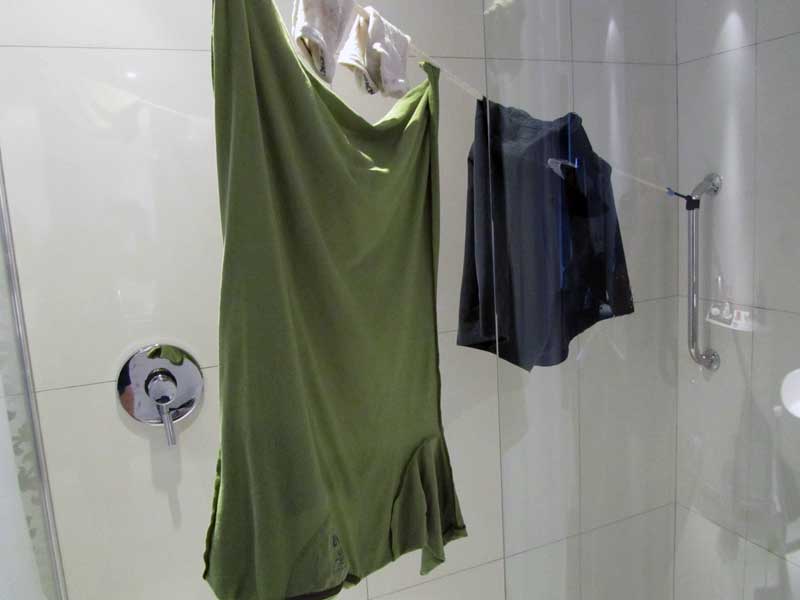 Because we pack light, Kris and I do laundry in our hotel room