I keep meaning to use the new Foldedspace as a replacement for the dormant (defunct?) Animal Intelligence, but never seem to make the time to do it. Let’s remedy that situation starting today, shall we?

A little background
I believe that the birds and beasts are smarter than most people credit, that they’re capable of leading rich emotional lives.

I do not believe that animals possess human intelligence. That is not to say that humans are smarter (though this may be true), but that each type of animal has its own thought processes, its own means of evaluating the world. Comparing intelligence across species is a tricky thing.

A couple of important notes:

Though I respect both camps, these are not choices I have made for myself. (Though I toy with the idea of vegetarianism.) How do I reconcile my personal choices with my belief that animals are intelligent? I don’t. Cognitive dissonance, my friend, cognitive dissonance. (And an uncomfortable thing it is, too, especially each January when my wife and I hold our annual Ham Feast.)

Anyhow — I love animals and stories about them. Not just about their intelligence, but about their stupidity and their playfulness and their malevolence, too. And while I used to share those at Animal Intelligence, I’m going to start sharing them here at Foldedspace instead. 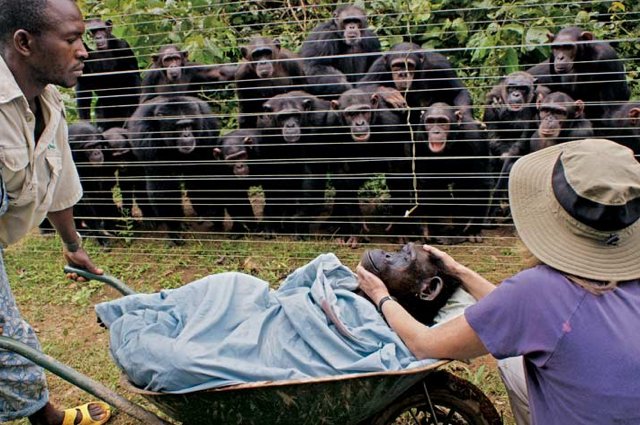 This photo by Monica Szczupider shows Dorothy, a nearly 50-year-old chimpanzee being wheeled for burial while her friends and companions watch on. Szczupider told National Geographic:

Her presence, and loss, was palpable, and resonated throughout the group. The management at Sanaga-Yong opted to let Dorothy’s chimpanzee family witness her burial, so that perhaps they would understand, in their own capacity, that Dorothy would not return. Some chimps displayed aggression while others barked in frustration. But perhaps the most stunning reaction was a recurring, almost tangible silence. If one knows chimpanzees, then one knows that [they] are not [usually] silent creatures.

The second story I want to share today is an old article from the UK Guardian that notes the more humans study dolphins, the brighter they turn out ot be. I love the opening anecdote:

At the Institute for Marine Mammal Studies in Mississippi, Kelly the dolphin has built up quite a reputation. All the dolphins at the institute are trained to hold onto any litter that falls into their pools until they see a trainer, when they can trade the litter for fish. In this way, the dolphins help to keep their pools clean.

Kelly has taken this task one step further. When people drop paper into the water she hides it under a rock at the bottom of the pool. The next time a trainer passes, she goes down to the rock and tears off a piece of paper to give to the trainer. After a fish reward, she goes back down, tears off another piece of paper, gets another fish, and so on. This behaviour is interesting because it shows that Kelly has a sense of the future and delays gratification. She has realised that a big piece of paper gets the same reward as a small piece and so delivers only small pieces to keep the extra food coming. She has, in effect, trained the humans.

Her cunning has not stopped there. One day, when a gull flew into her pool, she grabbed it, waited for the trainers and then gave it to them. It was a large bird and so the trainers gave her lots of fish. This seemed to give Kelly a new idea. The next time she was fed, instead of eating the last fish, she took it to the bottom of the pool and hid it under the rock where she had been hiding the paper. When no trainers were present, she brought the fish to the surface and used it to lure the gulls, which she would catch to get even more fish. After mastering this lucrative strategy, she taught her calf, who taught other calves, and so gull-baiting has become a hot game among the dolphins.

This is actually a fantastic article on the current state of research into dolphin intelligence. I’ve bookmarked it for future reference. I particularly like the bit about how dolphins are able to watch television (which is apparently more difficult than it sounds). This fact is followed by the droll line, “Of course, an understanding of TV is of little use in the wild.” Hahaha.

That’s it for this installment of Animal Intelligence. If you find any great animal stories, please pass them along.