Kris and I drove down to clean Mom’s house last night. Over the past decade, her place has gradually been overtaken by Stuff and clutter. Since Mom is still in the hospital, we figured this was a great time to tackle some of the mess.

After three hours of cleaning clutter and sorting Stuff, there’s no mystery about where I acquired my compulsion to buy. I come by it honestly. But while I’ve managed to kick the habit, Mom is still under its sway.

The gift that keeps on giving 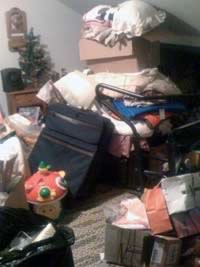 We started cleaning upstairs in the spare bedroom. It was difficult to even get the door open, and when we did, we didn’t know where to begin. The room was piled with boxes and bags and bubble wrap.

Mom has a thing for ordering from catalogs like Current, ABC Distributing, and Colorful Images. Over the years, she’s ordered boxes and boxes and boxes of Stuff from these companies to give as birthday and Christmas presents. She’s given most (but not all) of these things away, but, for some reason, she’s kept the boxes.

She’s also kept some of the gifts, misplacing them beneath stacks of paper and plastic. Kris found one item intended for our nephew, Michael. Mom wrote herself a sticky note: “Christmas 2002 2004″. It’s now 2008. Michael will be ten years old this winter, and the gift is no longer appropriate.

At one point I stopped and sighed as I looked around the room. “This is a great example of why you shouldn’t buy too much in advance,” I said. “This whole thing is a mess.” I’m sure Mom no longer has any idea what is left in the room. She ought to take an inventory.

Best by date
Next we worked on cleaning Mom’s refrigerator and pantry. We sorted the old, expired food from the good. Little was good. “This soup is from 1997,” Kris said, discarding a can of Campbell’s cream of mushroom. “And this Wheaties box has Clyde Drexler on it.” We laughed.

We found many similar examples: 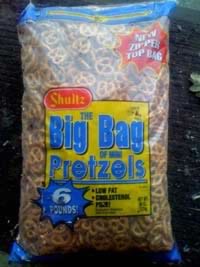 Mom apparently buys a lot of food at Costco in bulk packages. She might drink the first two bottles of a Snapple four-pack, but then the last two become spoiled. Or she’ll buy a six-pound bag of pretzels but forget about them.

(“Maybe she likes pretzels,” I said when Kris showed me the bag. But she replied: “No woman living alone should buy a six-pound bag of pretzels.” The bag was from 2001, so I’ll give Kris the point on that one.)

We threw out several hundred dollars in spoiled food, nearly all of it in giant Costco containers or bound as part of a Costco bulk pack. Costco (and other warehouse clubs) can be a great way to save money, but not if the food doesn’t get used. A bargain is not a bargain if it goes to waste.

Little messes become big problems
Eventually we noticed something alarming. My father had actually purchased many of the items in the freezer and the fridge. My father died in 1995. Obviously it makes no sense to throw food away just because the person who bought it has died. But it also makes no sense to keep the food for twelve years past the expiration date.

“You know,” I said. “Mom probably never meant to save this Stuff so long. I’ll bet it started small. She let a couple little things slide. She kept this jam, for example, or those pickles. Before long, she wasn’t throwing away any of her old food.”

A similar problem became apparent with the cats’ litter boxes. What had started as a single “accident” is now a looming disaster, an accretion of months or years of similar accidents. The stinky mess has ruined not only the linoleum, but perhaps also floorboards underneath. If you let the little things slide, they eventually become big things. In this case, a mess that might have taken a few moments to clean will probably now cost several hundred (or several thousand) dollars to repair.

A small step
Going through all of Mom’s Stuff, and handling her finances recently, I feel like I’ve been given a peek at a secret life. I’m able to see how she handles money, what she spends it on. Mostly she’s doing okay, but like all of us, she has blind spots.

We didn’t finish the job tonight. We managed to get a lot of Stuff out of the house, but Mom’s back porch is littered with trash. Her laundry room reeks of cat urine. We have a shopping list of things to buy for her. Even after we take care of these tasks, the work will continue in the weeks and months ahead.