Though I’ve long denied it, those who know me well tell me I’m a picky eater. It used to drive Kris crazy. When I started dating Kim, I told her I’d eat almost anything. It didn’t take her long to see that what I meant was I’d eat almost anything other than beer, coffee, mushrooms, and cruciferous vegetables.

Over the past year, I’ve made a conscious effort to face some of my food fears, and to overcome them. For instance, last May I started drinking beer, and now I actually enjoy it. (Beer is food, right?) I’ve also discovered the joys of kale and brussels sprouts. But perhaps my favorite new find is coffee. I started drinking coffee in August — tentatively at first — and am now a coffee addict.

I think the key to my conversion was starting with the good stuff. I was buying a bag of Stumptown Coffee for my brother’s birthday, and the barista offered me a free cup. I declined at first, but he was insistent. “Do you like tea?” he asked. I do. “Then try this coffee,” he said, serving me a cup brewed from Ethiopian beans. I was surprised to find I actually enjoyed it. Over the next few weeks, I tasted Kim’s coffee whenever she had it. Gradually my coffee aversion faded. In fact, I came to crave the stuff.

Now quality coffee is one of my favorite parts of the day. Every morning, I roll out of bed and go to the kitchen, where I pour about two ounces of grounds into my Chemex beaker. I boil a kettle of water, which I then pour over the grounds to produce several cups of awesomeness. 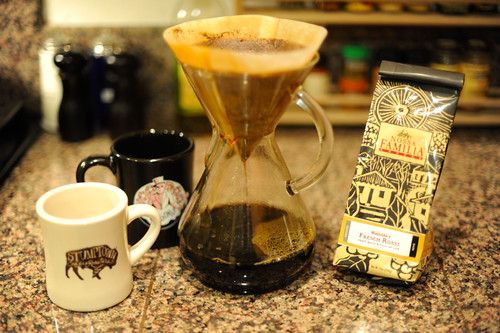 The trouble, of course, is that quality coffee is expensive. Some of it is crazy expensive. Stumptown has some great roasts that cost $30 per pound. Yikes. The local organic grocery has some good blends, but they still costs about a buck an ounce. That works out to roughly $2 per day to feed our coffee habit.

Note: Because I like to try new coffee, I just signed up for the subscription coffee service from BrewPony, which promises to supply quality Portland coffee on a monthly basis. Sounds like fun to me!

Kim is frugal by nature, and she hates how much we spend on coffee. But she also hates the cheap stuff. It’s a dilemma. But she’s come up with a way to tackle the problem: She wants to buy green coffee beans and roast them herself. There’s a place near my condo that offers classes in coffee roasting, and I think we’re going to take one. Who knows? Maybe in a few months, we’ll be enjoying great coffee that we’ve roasted ourselves — and saving money in the process.

To be honest, all I care about is that the caffeine continues to flow.

Now, if you’ll excuse me, I need another cup of joe…

Postscript: The next food fear I’ll face? Mushrooms. I hate mushrooms. Kim loves them. To give her a treat (and to give myself the best possible introduction to these vile fungi), we’ll soon have dinner at The Joel Palmer House, a local restaurant that specializes in mushrooms.