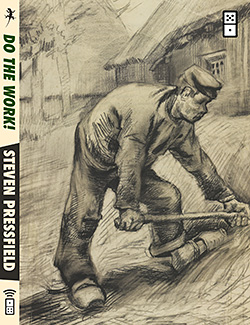 Steven Pressfield’s The War of Art is considered a classic among creative types, including bloggers. This thin book argues that the biggest enemy to productive work is Resistance, which takes the form of self-doubt, procrastination, addiction, distraction, perfectionism, and so on. The War of Art is a call to ignore Resistance and to do the work you’ve been called to do.

In his 2011 book, aptly titled Do the Work!, Pressfield again assaults this monster called Resistance. This time, however, he offers a step-by-step method for slaying the beast.

Before I left for Turkey, I spent a Sunday afternoon reading and taking notes on Do the Work! What emerged was a sort of workflow for accomplishing creative goals:

Getting work done is no longer a problem for me — though it used to be. If anything, I have the opposite problem: I’ve become a sort of work-a-holic. (Actually, I work like crazy from Monday to Thursday so that I can completely relax Friday through Sunday.)

That said, I love reading books like Do the Work! They show me how other creative types get things done. More than that, they provide added motivation. After I read these sorts of books, I come away energized and ready to do Great Things.

In fact, Do the Work! is one of the reasons More Than Money is up and operational today. If I hadn’t read the book, I’d probably still be trying to come up with the perfect blog name and design. I’d probably still be agonizing over what sorts of things to write about. Instead, I’ve simply begun. I’m doing the work. I can worry about perfectionism later.

Related reading: In a way, this book reminds me of George Leonard’s Mastery, which is the best book I’ve never reviewed. When I talk to people in Real Life, I often say that Mastery is the best book about personal finance I’ve ever read, even though it’s not a book about personal finance. Maybe I’ll get off my butt and review the book for More Than Money.