For most of our time in Venice, I felt trapped. I felt like a caged animal. For the previous couple of months, I’d become accustomed to an intense workout at 6:30 every morning, and remaining active through most of the day. Despite claims to the contrary, I felt like our tour wasn’t very active. It was a lot of standing around looking at stuff. So, I felt trapped. I had all this excess energy, and I needed to burn it off.

So, on our last morning in Venice, I woke at 5:22 for an early morning run through the streets. I ran across the Rialto bridge to the Basilica di Santi Giovanni e Paolo, then found my way to St. Mark’s, and then the Accademia. From there, I ran northwest along the waterfront, then picked my way through the alleys to the tranchetto (car park). I made my way across the Ponte della Costituzione (Venice’s newest bridge) to the train station, before running down the wide avenue to the Rialto. I did about six miles in around an hour. It felt great. 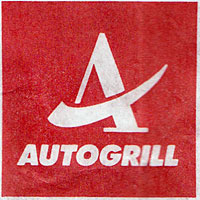 At 8:15, we made our way to the vaporetto (water bus), which carried us to our motorcoach for Florence.

Our bus ride took us through beautiful hill country that reminded me (and others) of Colorado west of Denver. For lunch, we stopped at an Autogrill outside Bologna. An Autogrill is a glorified rest stop alongside the freeway. I don’t mean this in a bad way. In the U.S., we have scuzzy minimarts in our roadside gas stations. An Autogrill is like that, but with higher-quality goods (including books and produce) and, often, a cafeteria.

This particular Autogrill had a cafeteria with pasta, meats, fruits, and (of course) wine. It also had a gourmet food store in the lower level. It’s not a great place to eat, but it’s a fun glimpse at something other countries have that we in the U.S. do not. 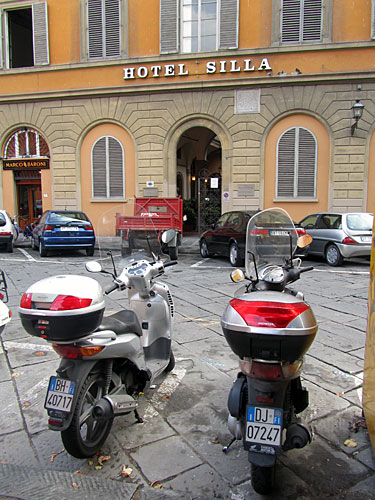 This was the most expensive place we stayed on our trip. Fancy hotels are lost on me and Kris.

Our group arrived in Florence at 2 p.m. and settled into the Hotel Silla, just north of the River Arno. After a short rest, we met our tour guide Sarah for a walking tour of the city. She showed us the “fake David” and other sculptures, the Duomo, and more. 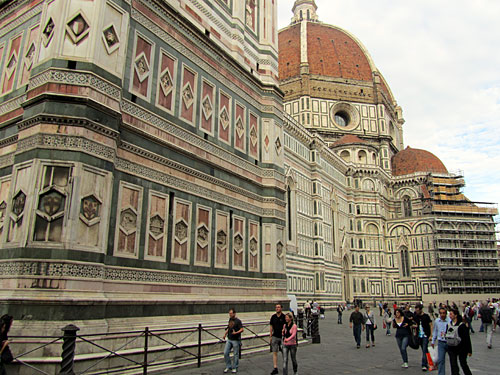 The Duomo in Florence, which sprawls through the city’s center. It’s huge. 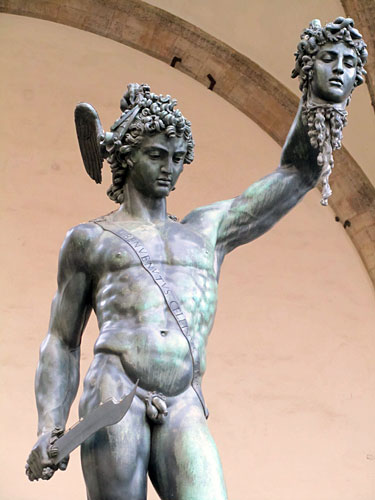 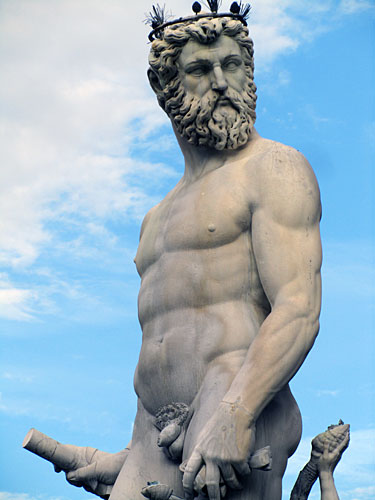 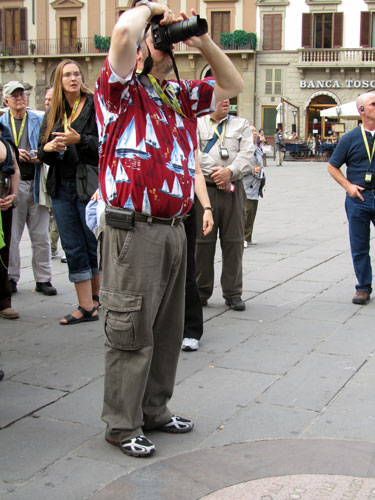 Wes, photographing Neptune. Sarah, our tour guide, stands behind him.

We then walked to Florence’s Accademia art gallery, where we saw the real David by Michelangelo. This marble statue may be the most famous sculpture in the world — and it’s really quite impressive.

To end the evening, we walked to dinner at Giglio Rosso. This was my favorite meal of the entire trip. The food was fantastic (three kinds of pasta, three meats, several glasses of wine, and two profiteroles for dessert) and the service smooth. Delicious!

We walked home on a warm Thursday evening, enjoying the boisterous street activity, including many street artists like these:

I started the day feeling like a caged tiger, but ended it purring like a cat. Despite my complaints in these journals, I enjoyed Italy a great deal. It was a wonderful place, and in many ways felt like home. The food was great, the people were friendly, and the culture fit my personality. In retrospect, it was the structured nature of the tour that did me in. (And, as you’ll see, I have more complaints tomorrow!) The tour was great, as far as tours go. But I had much more fun in those moments I was allowed to break free from the script and improvise: running through Venice, walking alone across Rome, getting lost in Paris. I like discovery, not being told what to see.

There was plenty of discovery on our trip, so I was essentially happy. But the scripted moments — even when the script was good — often made me feel confined. (This is the reason I don’t like being on a cruise ship, either. I just don’t like pre-packaged tourism. It may be a fun vacation, but it’s missing an element of realism that I find vital in visiting new places.)