Nick and I have been in Istanbul for five full days now, and we’ve barely scratched the surface.

Without a tour group and with no real agenda, we’ve explored the city slowly. In fact, there are still lots of things we haven’t done. Whenever we part ways — which we do at times during the afternoons — Nick ranges far afield while I explore old Istanbul, trying to get a better feel for the streets and neighborhoods. 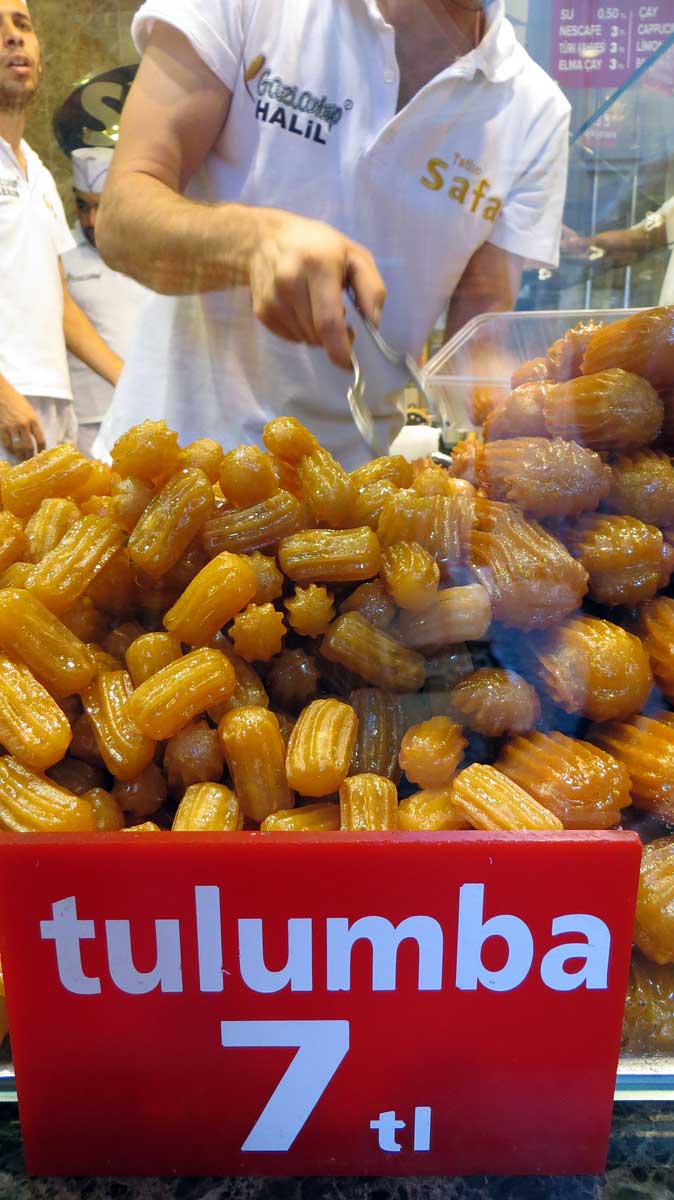 Our feet are sore, and so are our throats. (We can’t tell whether it’s pollution or allergies. It might be both.) But so far, the minor ailments have been worth it. Here are some of the highlights from our first few days in Turkey.

Overall, I’m not that impressed with the food. Maybe I’m just trying the wrong things. Before I left, people kept telling me how great Turkish food was, but I don’t get it. There’s just not much variety. (Jodi‘s given me a lead on a good kebab place (or “kebap” as they’re known here), but that’ll have to wait until I return to Istanbul in ten days.)

That said, there are some Turkish foods that I like — including Turkish coffee. I’ve only been drinking coffee for about six weeks, so it might seem strange that I’ve leaped into the deep end and am now drinking the industrial-strength stuff. But there you go. I’ve had Turkish coffee twice and loved it. I especially loved it with a small dish of tulumba, which are a sort of cross between a donut and a churro. (One of my super powers is finding the local equivalent of donuts no matter which country I visit.)

Just as I learned to love maracuyá (a type of passionfruit) in Peru, I’m learning to love pomegranate here. Pomegranate juice, especially. Between four and eight lira (about $2US to $4US) will buy a cup of fresh-squeezed juice. It’s very sour — much more sour than the Pom-brand stuff in U.S. grocery stores — but it’s delicious. 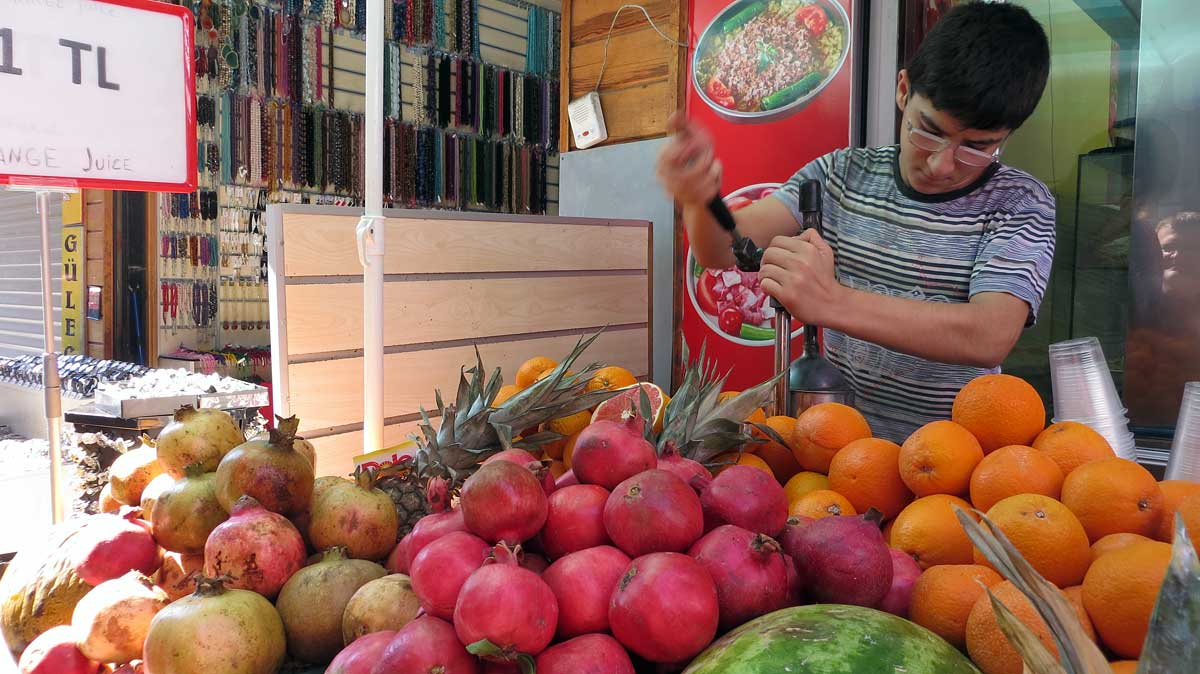 For two bucks, this boy squeezed me a glass of fresh pomegranate juice

Actually, Turks seem to have a fondness for sour flavors. Many things, such as candies and juices are flavored with sour cherry (visne). I like sour things too — such as the afore-mentioned maracuyá — so, hey, I feel right at home.

There are cats everywhere in Istanbul. Just like the dogs in Cusco, Peru, the cats live and interact with the humans on a daily basis. They have their own cat agendas, almost as if they have jobs. There’s an orange cat that hangs out at the benches benches between the Blue Mosque and Haigia Sophia. And today I stopped to rest at a coffee shop. A small calico kept bringing bits of meat off the street and carrying them to a back room. “She has a litter of kittens back there,” the shop owner told me. “I’m letting her stay.” 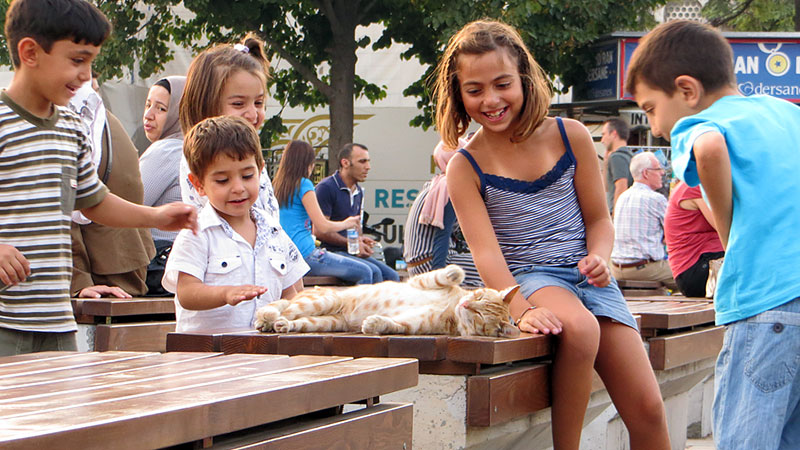 Salesman are aggressive here, and tourists are suckers. How do I know? Because I’ve been a sucker already, and so has Nick. Nick paid 40 lira (about $25US) for a shoeshine. I paid 75 lira (about $45US) for a meal that should have cost 20 lira. But you’re only a sucker once. (Sometimes twice.) After that, the aggressive salesmen have to find new suckers. 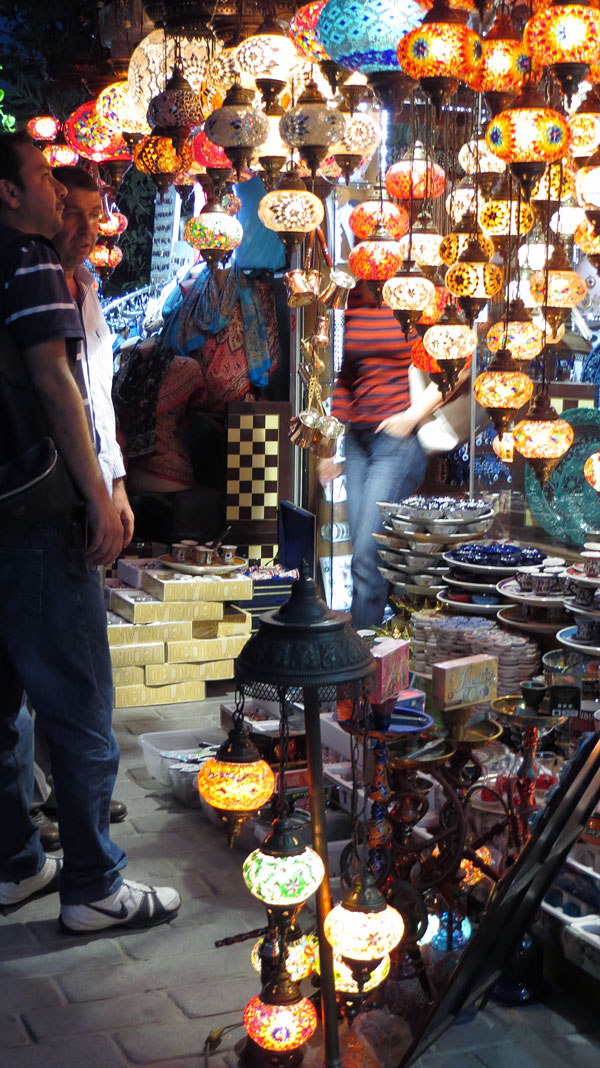 Surprisingly, I’m getting plenty of practice with my Spanish. I have a Spanish-language map, Spanish-language guidebooks, and I pick up Spanish-language brochures at each museum or site. We’ve befriended a shopkeeper named Ramazan, who speaks a bit of English and a bit of Spanish. He and I speak Spanish with each other whenever go in to buy water or deodorant or chips. When I’m accosted by the afore-mentioned aggressive salesmen, I pretend to speak Spanish, which usually (but not always) gets me out of having to deal with them. 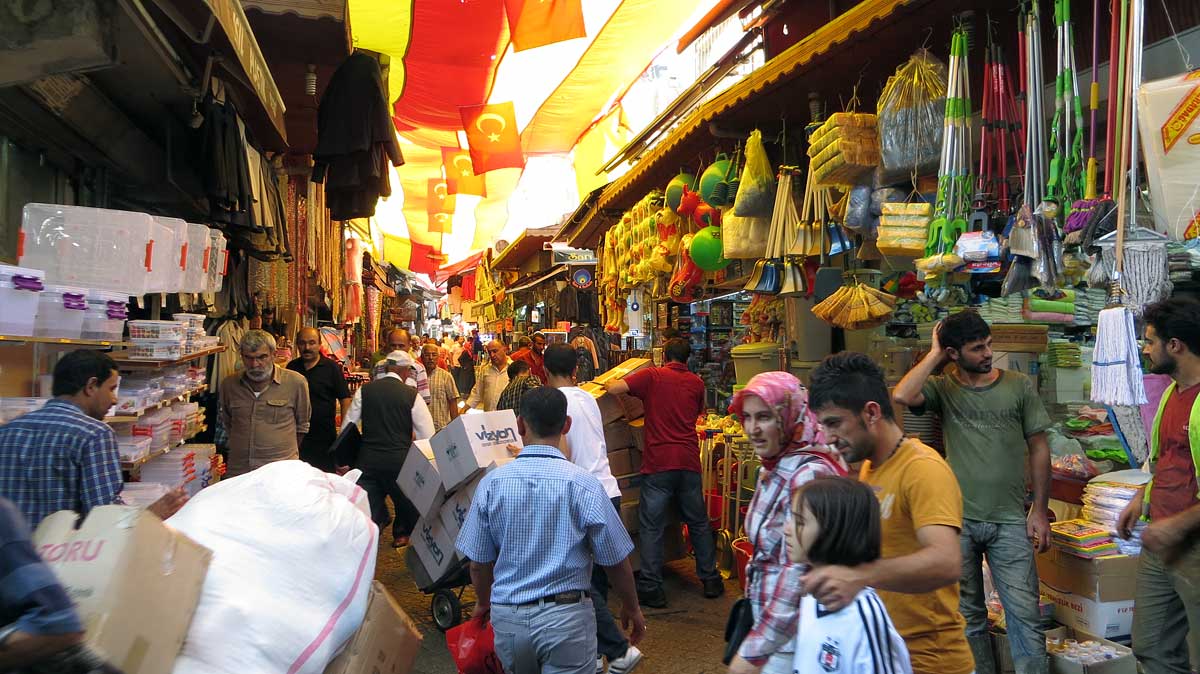 The bustling real-world marketplace outside the Egyptian Spice Market

Finally, I like a couple of my snapshots from Haigia Sophia, so indulge me. 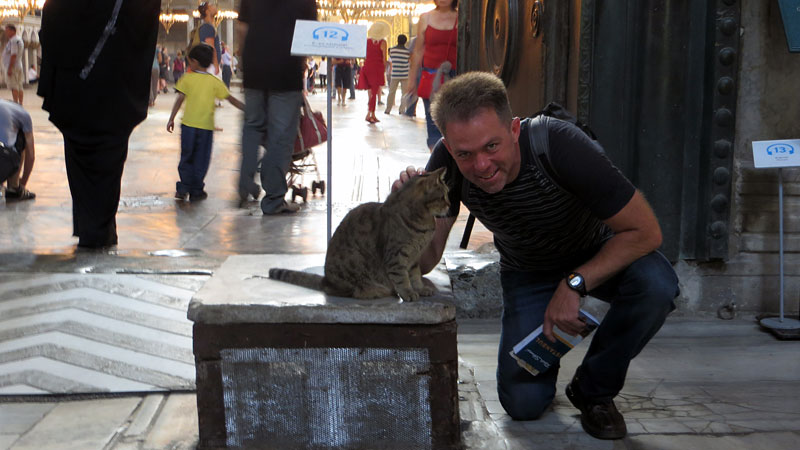 This cat was guarding the Imperial Gate at Haigia Sophia, but it let me pass 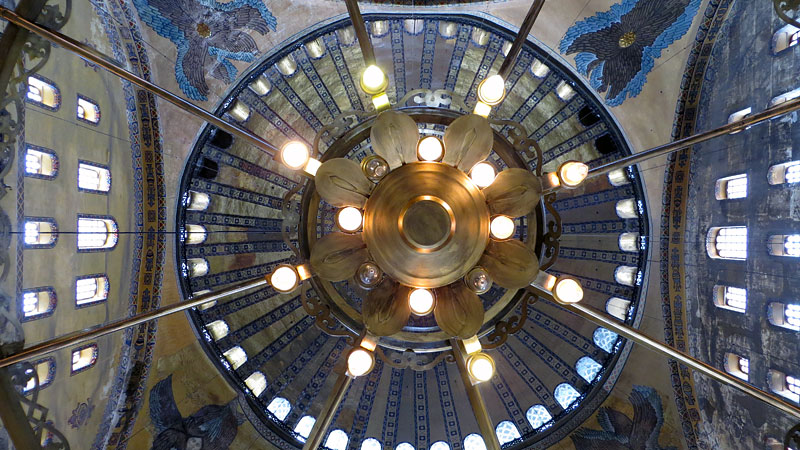 The ceiling (and great chandelier) in Haigia Sophia 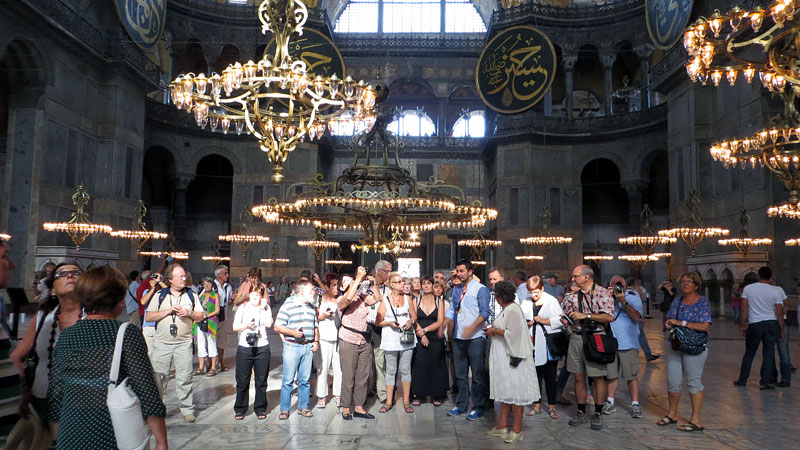 A group of tourists gathered near the apse of Haigia Sophia

This morning, Nick and I will take the ferry and bus to Izmir, which is a couple of hundred kilometers south of Istanbul. We have no hotel reservations and no idea what we’ll do when we get there (which will probably be around 17:00 local time). So far, things have been easy, and we’re counting on that being the case in Izmir as well. It may be a bad assumption. We’ll see.

Until next time, my friends, be well.