There are few things better than waking to a bed full of cats.

Yesterday I told Kris, “It’s as if the sun is up there, just waiting to come out, and when it finally does the people of Portland aren’t going to know what to do: it’ll suddenly be ten degrees warmer, and we won’t be able to handle it.”

You can tell that spring is trying to come. Behind the clouds and the rain there’s a big orange ball of fire that, on occasion, peeks out to remind us of what’s in store.

Soon it will be tulip time.

Last fall, as my depression began to set in again, Tiff wondered aloud if I might not suffer from Seasonal Affective Disorder. I pooh-poohed the idea then, but after having watched my mental state over the last few months, I’m beginning to suspect she’s onto something. Perhaps I didn’t used to be affected by the seasons, but am now. I’ll have to collect more date.

We took Nemo to the vet yesterday. He was not pleased. Kris suffered some painful scratches while we loaded him into the cat carrier. In the examination room, though, he was docile like I’ve never seen him before. 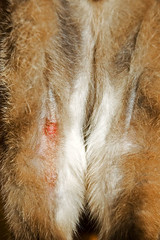 The good news is that his sore seems to be healing, and that the vet doesn’t think it’s anything to worry about. “It’s probably just an allergic reaction,” she told us.

Kris and I are preparing Marcela’s brisket a lá carbonnade for Paul and AmyJo tonight as part of our ongoing monthly food-exchange. It’s sort of like a book group, but with food. Each month the four of us get together, alternating homes, and eat a tasty meal. Kris and AmyJo run the show; Paul and I are just along for the conversation and the after-dinner Scotch. This is actually a prepare-in-advance dish that we cooked on Thursday night. If it’s a success, we plan to serve it on our Bend trip in April.

Other plans for the weekend: finally completing the Great Book Purge begun last fall, a Sunday morning trip to Ken’s Artisan Bakery, perhaps a viewing of V for Vendetta with Dave and Mitch, and some yard work, of course, if the weather allows.

At our writer’s guild meeting the other night, my comrades noted that I have a tendency to show something in text (which is good), followed by a summary telling what I’ve just shown (which is bad). In fact, I just had to edit this post because I had three such summaries at the end of sections. Hm.