Sometimes Kris surprises me. For months I’ve been trying to get her to watch Heroes with me. It’s not a show I was interested in at first (am I interested in many television shows?), but after reading so many good reviews, I purchased the entire first season from iTunes, but never watched it. It’s been sitting on my hard drive unviewed for at least six months. “It looks stupid,” Kris would say. “I don’t like superheroes.”

Then last Thursday, she surprised me. “Let’s watch Heroes,” she said.

“Er, okay,” I said, and we traipsed upstairs to connect the computer to the big monitor. We watched the first episode.

“It’s supposed to get better,” I said. So we watched the second episode. And the third. “It’s time for bed,” I said.

“We can watch one more episode,” Kris said.

On Friday, we watched three more episodes, and on Saturday another three. In fact, it was hard to stop. It was like an addiction.

Heroes is a clever show in many ways. Creator Tim Kring has drawn on many modern superhero tropes, and developed them for television in a way that is friendly not only to comic book geeks, but also to those who wouldn’t be caught dead reading a comic. The characters don’t run around in costumes — they’re average people leading average lives. Superpowers are downplayed at the expense of human drama. Sometimes it seems like a soap opera with superheroes. 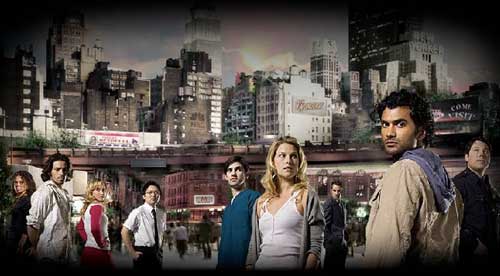 The main characters include:

And, of course, there are a collection of bad-guys, most notably Sylar, a man who kills other super-powered people and eats their brains to take their powers.

This show isn’t perfect, though. In fact, often it’s just mediocre. To some degree, Heroes suffers from the Battlestar Galactica disease: characters that are chummy one week will be at each other’s throats the next week, and then allied again in the third week. These ever-shifting alliances make little sense, and it’s often difficult to discern any long-term motive for a particular character. This frustrates me, but it’s not as bad on Heroes as it is on Battlestar Galactica. Also, like Galactica, Heroes has the danger of becoming “about itself”, the ultimate sign of a doomed show.

(Someday I’ll articulate this theory in more detail, but it’s my belief that you can tell a show has grown stale — jumped the shark, if you will — when it no longer adheres to its initial premise, but becomes “about itself”. The classic example is Seinfeld‘s self-referential plot about developing a “show about nothing”. In that particular case, it was well-handled, but most of the time when something like that happens, the show is lost. It happened in a big way during Battlestar Galactica season three, and it’s happened to most of my favorite shows. It’s one of the primary reasons that the Star Trek franchise imploded.)

I like most of the cast of Heroes, but I’d be happier if some of the characters died. Matt Parkman, the telepathic police officer, needs to be offed. I’m not a fan of Nikki/Jessica, either. I know that there will be new characters during the second season, but I’d actually prefer if the show was mostly about new characters and situations. We’ll see.

I enjoyed the show — though the first ten episodes were better than the last thirteen — and I look forward to seeing where the creators take it in the future. Best of all, I know that Kris will be watching it with me!

(For those of you who watch the show, be sure to check out the Heroes wiki.)