Because I am a nerd, I like to “theme” my months and years. Doing so helps me keep on task. And it’s fun. One month, for instance, I might make it a goal to go the gym every day. Or maybe I’ll decide that February is devoted to reading books.

Well, this year’s theme is me. I’ve decided that 2023 is the Year of J.D. I’ve given myself permission to spend twelve months — 365 days! — doing what I want when I want to do it. That doesn’t mean I get to be a jerk. It just means that I get to pursue whatever makes me happy in the moment.

One thing I’ve always enjoyed is movies. I enjoy telling stories, but I also enjoy having stories told to me. The best movies are powerful, effective stories.

I’ve been making some subtle changes in my life that allow me to watch more films. There’s a local theater that shows second-run films every Wednesday night, for instance. I’m now in the habit of attending those. And instead of browsing Reddit before bed, I’m trying to learn to watch a movie (or part of one).

When it comes to film, I’m omnivorous. I enjoy all genres and all eras. As long as a movie is compelling, I’ll watch it.When I say I like all films, I don’t mean that I like bad ones. Sure, there are some bad movies I like (Flash Gordon, Buckaroo Banzai) but mostly I find bad movies tedious. I’ve been tracking my film-watching habits for two years now over at Letterboxd, and I’ve been using that site to build a “watchlist”, a wishlist of films to watch in the future.

Somehow recently, I’m hooked on silent films from the 1920s. Last week, I watched The Gold Rush (Charlie Chaplin, 1925) and A Trip to the Moon (1902), two iconic silent films. I’m currently in the middle of Sunrise: A Song of Two Humans (1927). And last night? Well, last night I watched the spectacular Metropolis (Fritz Lang, 1927).

I’ve been aware of Metropolis 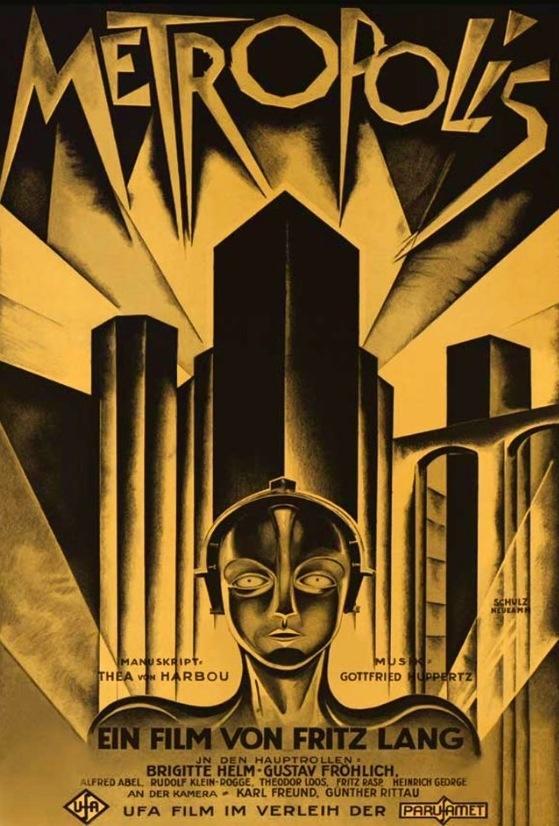 for most of my life. It’s iconic. It’s a classic. It’s one of the first (the first?) major science-fiction films, and its bold imagery is used often to show what primitive sci-fi visions looked like. Somehow, though, I’d never watched it. (I guess this shouldn’t be a surprise. How many of us actually go out of our way to watch silent films?)

To celebrate the arrival of Metropolis into the Public Domain, I decided to make it my first film of 2023. I’m glad I did. It deservers its reputation. Even 100 years later it’s a film worth watching.

In a futuristic city sharply divided between the working class and the city planners, the son of the city’s mastermind falls in love with a working class prophet who predicts the coming of a savior to mediate their differences.

Watching Metropolis, you can see how it influenced the entirety of science-fiction filmmaking that followed. Blade Runner is an obvious comparison, but Star Wars too.There are no lightsabers, blasters, or X-Wings here; there is, however, a story about a rebellion. So many episodes of the original Star Trek were influenced by Metropolis. So many monster movies.

Let’s be clear, though. This film is overlong and melodramatic in parts. You know those stereotypical ideas you have of silent actors mugging for the camera in exaggerated fashion? Yeah, the lead actor does a ton of that here. (The lead actress does too, but it works in her case. Go figure.) At times, the movie borders on nonsensical. It’s almost impressionistic at times.

A Vision of the Future

Mostly, though, Metropolis is filled with stunning visuals. They’re stunning today; I can’t imagine what it must have been like to see these images one hundred years ago.

Here are a few of my favorite shots.

There are many, many other great shots in this film. It’s full of them. The visuals are right up there with any film from Denis VilleneuveIf you knew how much I like Villeneuve, you’d know what high praise this is from me..

And you know what? Since Metropolis is now in the public domain, I don’t mind embedding this video, which provides the entire 2-1/2 hour film on YouTube…

I’m going to be watching several more silent films in the coming weeks: M, Modern Times, The Passion of Joan of Arc, Battleship Potemkin. In many ways, I find them more relaxing than modern movies. The downside is you have to pay attention because there are no dialogue clues to help you follow the story!

To close things out, here’s some further reading related to Metropolis and silent films.

That’s it for today. Off to walk the dog. When I return, I’ll resume watching Sunrise: A Song of Two Humans.