When I was a child my family did not own a television. For this I cannot thank my parents enough. (The destructiveness of television is a topic for another weblog entry.) At the time, though, we kids felt cruelly deprived of our right to watch Happy Days, Laverne and Shirley, Wide World of Sports, and Saturday morning cartoons.

Many Saturdays we’d bike the half mile to Kurt Gunderson’s house where we’d sprawl on the orange shag carpet in the living room, where we’d eat sugared cereals (another right of which we were unjustly deprived by evil parents) and laugh at the adventures of Bugs Bunny and Road Runner, or puzzle at the completely foreign world of Fat Albert and his gang. (We were white kids raised in rural Oregon; what did we know of impoverished black kids in New York?)

Our babysitters had it easy: they simply had to bring along a portable 9″ black-and-white set and we were tamed from wild maniacs to sedate zombies, staring blankly at the screen. With us so easily subdued, the sitter was free to gab on the phone for hours at a time or to invite a friend (sometimes a boyfriend) for a visit.

Family vacations were a treat; the hotels rooms always had televisions. Mom and Dad would try to convince us to go to sleep, but it was useless if there was anything good on TV. And by good I mean: a war movie, a science fiction program, Happy Days, The Six Million Dollar Man, or The Bionic Woman. (ch – ch – ch – ch – ch – ch Look at my bionic jump!)

I remember loving two shows as a child: The Wonderful World of Disney and Mutual of Omaha’s Wild Kingdom (with Marlon Perkins).

I only saw a handful of Wild Kingdom episodes, but the show left its mark. The locales were exotic, the animals fantastic. I could not get enough. Marlon Perkins, despite his age, lived a thrilling life, meeting wild and fantastic animals up close, daring danger without a thought. He was a heroic figure to an eight-year-old.

There are those of us who believe that animals are far more intelligent than most people credit them. Kris and I like to find new studies and new anecdotes that support this belief. Yesterday she pointed me to this article on orangutan culture.

(The article refers to a study published today in the journal Science. The study can be found here, but requires free registration. The study was conducted, at least in part, by a member of Orangutan Foundation International.)

I believe that if you have never had a close personal relationship with an animal, have never witnessed an animal exhibit profoundly intelligent behavior, then this says more about your intelligence than the intelligence of animals.

One of my favorite animal photographs: 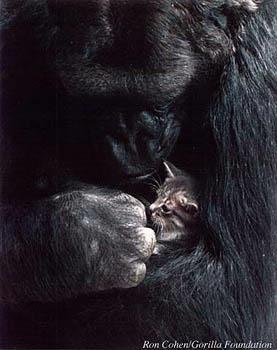 Koko and All Ball

And another (a repeat): 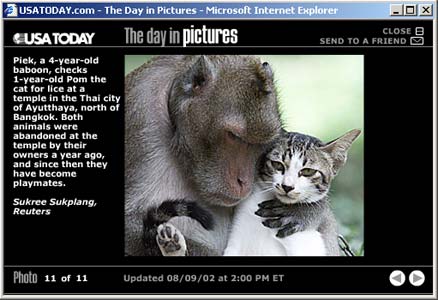 While composing this entry that I realized that Toto, my cat, has exactly the same personality as Gandalf, the parakeet I had when I was twelve.

This cat clock is pretty cool. It’s even cooler than you think. Look closely at the cat’s paws. [via Very Big Blog]

There are weblog awards? Somebody ought to do a study on they psychological motivation to give awards for anything and everything!

Well, I did it: the orangutan culture link has become my first front-page post to Metafilter. I can’t believe I’m so nervous about it…

Speed Racer was one of my favorite cartoons that we never got to watch.

Although we had a TV, it was black and white till I was about 6, and it was in the UP of Michigan, where we really only got about 2 stations (plus a UHF one), till I was 9.

My neighbors had cable, and they all got Speed Racer. I think I saw about three episodes of it when I was growing up, and it seemed awfully neat.

What I did get, however, were Battle of the Planets (with G-Force and the rather R2-D2-esque 7-Zark-7) and Thunderbirds are Go!(in Super-Marionation!), both on the aforementioned UHF channel.

I had a parakeet with a vocabulary of over 800 words and I began a website where I was posting his audio recordings. The more I posted and listend to them, the more I found him starting to talk in context. As a result he ended up being able to converse on almost any topic. You can hear some of the incredible recordings on his site. http://www.talkingbudgie.com Hope to see you there.

I wish more shows like this were available for this generation to see.