There’s a little white house that lives up the street. It’s a small house on a small lot, but otherwise I think it’s kind of cute. I’m not sure that anyone lives there right now — the yard certainly isn’t maintained.

For the past couple of weeks, there’s been a manual reel mower sitting in the front yard. It was sitting upright, as if somebody had stopped in mid-mow, but eventually it fell to the ground. The grass has been growing up around it: the hunter has become the hunted!

Yesterday, however, I noticed that the mower had been moved. It was ditched at the top of the hill in somebody else’s yard. Someone — probably a kid — had wheeled it a few hundred feet and then discarded it. “I ought to put it back where it belongs,” I thought. But I didn’t do it.

That’s okay, though. This afternoon as I was walking home, I noticed that the mower had been returned to the exact position from which it had been taken. That, my friends, is neighborliness! 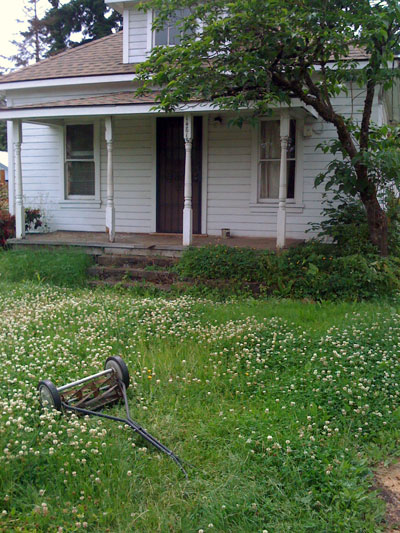