I was interviewed this morning for a segment on Yahoo Finance. It didn’t go nearly as well as I had hoped. I was nervous. I fumbled when I spoke. I couldn’t remember what I wanted to say, even though I was speaking about my own experience. 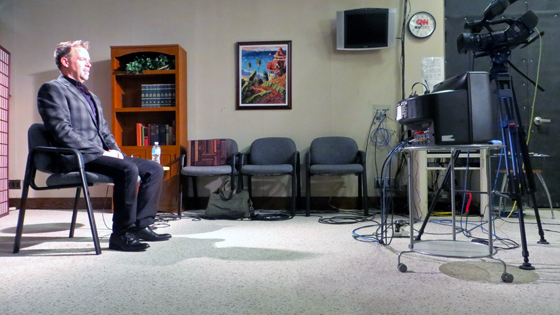 Here I am, talking to thin air…

As I stumbled — stopping and re-starting my sentences again and again — I began to panic. What was happening? I’ve been interviewed dozens of times in the past year, and I’ve interviewed dozens of people myself. I never have problems. I’ve had several interviewers praise my poise recently, but poise was nowhere to be found today.

While driving home, I tried to figure out what went wrong. Jeremy, the producer, had been friendly and organized and very clear about what he wanted. I spent plenty of time reviewing the topic we’d be covering (my tax audit in 2014) and I felt comfortable with the material. When I reached the television studio where we filmed the segment, I spent half an hour chatting with the woman who was managing things on our end. Everything should have gone great!

“Well, my favorite TV segments have been the ones where I’m actually talking with a live person,” I thought. I remembered a bit I did on DIY Christmas gifts a few years ago. For that, I stood in a local TV studio and joked around with the program’s host. That was fun. Or once in Denver, I did a segment about Fincon where I chatted directly with the news anchor. That went well too.

But what about the times I’ve sucked? There was the time I did a piece for a station in Miami. I sat in a local TV studio and talked to empty air, staring directly at the camera. I bumbled my way through that one too. At the time, I attributed my poor performance to the fact I had a high fever, but looking back I now see similarities to today’s situation. In both cases, I was talking to nobody — looking into empty space while trying to act like I was an expert.

“Aha!” I thought. “This is similar to my public speaking problems. When I’m on stage speaking to an audience, trying to play the expert, I don’t do well. I get nervous. I stumble and lose my way. But when it comes time for questions and answers, I shine. I do great when I’m interacting with somebody, when there’s a give and take, a conversation. It’s tough for me when I’m left to ramble on my own.”

After experiences like this, there’s a part of me that wants to pack it in. I want to decline all future interview opportunities. But you know what? I’ve spent the past decade learning that in order to grow, in order to enjoy life, in order to become a better person, I have to do the things that scare me. I have to face my fears and act despite of them. Will I fail? Absolutely! Sometimes I’ll fall flat on my face. Other times, like today, I’ll shuffle and stumble and be awkward. But in the long run, these failures make me better. I improve by looking at what went wrong and trying to correct it the next time.

Before the interview this morning, I was thinking about the notion of never giving up. My thoughts were prompted by a trivial experience.

Over the past few months, I’ve been playing a bit of Hearthstone, which is an online card game. I like to play in the Arena, which means I pay two bucks create a deck from random cards and then am matched against random opponents. I can continue playing until I’ve lost three games.

During my Hearthstone games, it’s common for me to fall behind early. It looks like I’m going to die an early death. It would be easy to quit when my opponent is crushing me after only a few turns. But here’s the thing: My style of play is slow and methodical. Despite falling behind early, I often rally to take control of the match. Longer ago, I did concede matches if I fell behind, but now I know never to give up. There’s a good chance I’ll rally for victory.

This “never give up” attitude applies to the game at another level. Sometimes when I build a deck, I’ll lose my first two matches. In the past, I’d just throw in the towel. I wouldn’t play a third match but would instead scrap the deck and build a new one. Not anymore. I’ve learned that even when I start 0-2, I can often finish with three or four or five wins. Yesterday, for instance, I almost gave up after being crushed in my first two matches with a new deck. Instead, I gave the deck another chance. I won. Then I won again. And again. In fact, I won six straight games, which earned me enough in-game currency to build a new deck for free. But I wouldn’t have been able to do that if I’d given up after losing my first two games.

“Never give up” is a common admonition in game and sports. “It’s not over until the fat lady sings,” we’re told. As many of you know, I’m a big fan of The Amazing Race. After watching 25 seasons of the show, I’ve learned a couple of things about the competition. The first rule of the Race is to always read your clues. (It’s mind-boggling how many people lose because they didn’t follow instructions.) But the second rule of the Race is to never give up. No matter how wrong things seem to have gone for a team, there’s always a chance they’ve been worse for somebody else.

In Praise of Perseverance

This “never give up” attitude is applicable to the real world too, of course, and in non-trivial ways. During the 1990s, when I was buried in debt, I wasn’t good at persevering. I’d spend a month or three trying to pay down my credit cards, but then give up at the first sign of adversity. I did the same thing with my fitness. I’d lose a few pounds but then return to my gluttonous ways at the first temptation.

It’s trite, I know, but when I look at the people in my life who have been most successful — by whatever means you want to define that word — they’re the folks who don’t let setbacks rule their lives. They fail forward, using mistakes and adversity as a launching pad to self-improvement. It’s all to easy to use mistakes and setbacks as an excuse to not achieve the things you want; but it’s better to take the tougher route, to wrestle with these obstacles and overcome them.

I’m curious to see how this morning’s Yahoo Finance interview comes together. Maybe the final product really will suck. Maybe I was so nervous and incoherent that the producer won’t be able to create anything worthwhile from the footage. On the other hand, it’s possible that there’s enough material there for him to make me look charming and insightful (ha!).

Regardless, I know one thing: I’m not going to give up. The next time an opportunity comes along to do a television interview, I’m going to do it — even if it means I’m talking to empty space again. Someday, once I do this enough, once I fail enough, I’ll be just as good at giving TV interviews as I am at writing blog posts.