My friend Scott and his family lost their home to Hurricane Katrina. Just after the storm, he sent the following:

Just wanted y’all to know that I am holed up in Lafayette, Louisiana (about two hours west of New Orleans). From all indications, Katrina has destroyed my home. There’s been some levee breaches and I know one of two things: 1) there’s three to four feet in my house, or 2) I no longer have a roof. Info is still sketchy. Keep me in your prayers and thoughts.

Some of you have asked for updates, and so with Scott’s permission, I’m sharing his latest message:

Our zip code in New Orleans was among the hardest hit and will be one of the last to return to the city. The whole area may need to be bulldozed. Gretchen and I went back on the 6th and the damage was extraordinary. I snuck in about three weeks ago to salvage wedding photos and some family heirlooms and was glad I did. The time between made essentially everything unsalvageable minus Gretchen’s grandmother’s china. This photo shows damage in the house immediately after the flood . . . there’s ten times as much mold now. 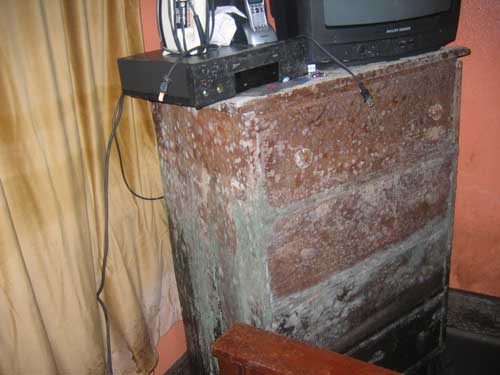 I could go on about the damage, but it’s hard to put into words. Think of everything you do in a given day — the place you get coffee at, the school you drop your kids off, the grocery store you buy at, the friend’s house you visit, your job — all gone . . . all destroyed and all you are left with are memories and even those are now somehow tainted. Don’t mean to sound overly dramatic.

We go through a range of emotions daily. Resentment, anger, sadness, hopeful . . . jumbled together. One day you hate the city. The next you think of it as a great opportunity. Most of all we’re pretty exhausted. Everyone, including my parents (who we are living with), is having some sleep problems, although the kids have adapted well.

The kids [Brewster and Amelia] have been great in fact. We lucked out early and enrolled them in a wonderful Day School. It’s been saving grace. One of the times Brew and Sissy look forward to is reading before bedtime. Brew, albeit four, is a reader and we’ve moved on to chapter books. He’s hooked on the Magic Tree House series. Sissy, on the other hand, likes Go Dog Go and There’s a Wocket in My Pocket.

. . . I have thrown myself into finishing off our 3rd CD for the Movers. [Note: Scott’s band is Imagination Movers. They sing songs for kids that even parents can love, as several foldedspace readers can testify. Check them out.] It’s one of the few sanctuaries I have. We lost much of their inventory and equipment, but our supporters are helping us stick together. Our agent has helped to replace our inventory of cds and dvds and the fans are helping to replace equipment. Future support? Ask friends to pick up a copy of the new CD when it comes out. We titled it Eight Feet which is the amount of feet we have in the group and also the water line in our neighborhood where three of the four of us lived.

Now for the good news — we did find our cat! We put our cat in the care of our neighbor who is a fireman and had to stay in New Orleans. Unfortunately, our mini-van’s air conditioning went out the week before the hurricane. When we evacuated, we left in a small Buick my grandmother left for us. The amount we could take was cut considerably. Our cat is an outdoor cat and is damn smart. Eric, our neighbor, and his wife are huge animal lovers. They offered to care for Flannery. We took them up. Anyway, the day the flood waters came, Eric saw Flan swimming to him. He’s got a two story and brought her there. His cat was under the house (every house is raised — ours was four feet off the ground). He went through his own floorboard to get his cat. Long story short, it was about a month afterwards that we got word our cat was safe.

Flan had a big gash on her shoulder, but is doing great and has become a beacon of hope for his. She’s now symbolic. How many cats can say that?

The assistance [from college friends] is welcomed and needed. If I think about it too much, I’ll start getting weepy eyed. Let’s just say the acts of others have been such that I am a better person because of it. This whole ordeal has made me realize how important the act of giving is. Sad but true. And how even the boring days are blessed because you never know how bad things can get until they do.

Kris and I are glad that Scott and his family are safe. It’s strange to think that somebody you knew for only a short period of time many years ago can figure so prominently in your life, yet sometimes this is the case.

Note: This is the first in what I hope will be a series of occasional entries written by you, the readers of foldedspace. As mentioned last week, I’d love to post what you have to say from time-to-time. Tiffany informs me that she has something for me to post, too. Dave? Amy Jo? John B? Kristin? Anyone else? This space is here for you if you’d like it.