“What do you want to do today?” Nick asked me this morning. We were feasting on a typical hotel breakfast in Turkey: bread and jam, watermelon, olives, a bit of goat cheese, cucumbers, and two slices of mystery meat. And tea. There’s always tea.

We’d spent the entire day in transit from Istanbul to Izmir — then south to Selçuk. Two hours by ferry, five hours by bus, one hour in the bus station’s internet cafe looking for lodging, and then an hour by van (dolmuş) to Selçuk.

“Then I’m going to go to Pamukkale,” Nick said.

“What’s in Pamukkale?” I asked. 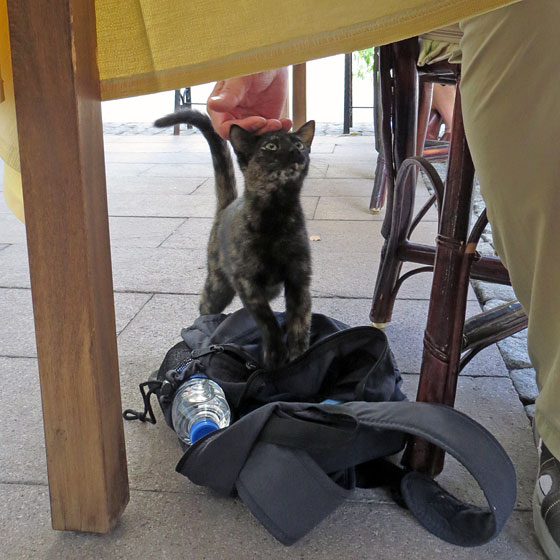 Some folks have requested a photo of Nick. Here he is, feeding a cat in Selçuk.

I finished my meal and stood to go. “Have fun,” I said. “I’m going to shower and shave.” Last week, I received the best shave of my life in Istanbul. Since then, I’ve remained clean shaven. (I’m not sure whether that’s permanent, but it’s fun for now.)

I was at the sink shaving — watching my own WDS speech on the iPad — when Nick burst into the room.

“It only costs 25 lira each to get to Pamukkale,” he said. “And it’s only a ninety minute trip. But we have to leave now. The bus is waiting.”

“Okay,” I said. “I’ll go.” I finished shaving in a rush, grabbed my camera, and we hoofed it to the bus station.

It’s common on trips like this to run into other travelers and then to strike up a conversation. It’s one of the best parts of traveling, yet it hadn’t happened for me in Turkey — until today.

The bus made a quick stop at the edge of Selçuk to pick up four other tourists. They happened to sit near us. We soon became acquainted with:

As our ninety minute ride began, the six of us chatted about travel and life. Of the group, Nicole had traveled most extensively. In fact, she’s in the middle of a ten-month round-the-world trip that started March first. She doesn’t plan to be home until the holidays — if then.

“Wow,” I said. “That sounds almost Australian.” Australians do a lot of world travel.

“I know,” Nicole said. “Not many Americans do this sort of thing. But it’s always been a goal of mine, so I saved up to do it.”

“That’s awesome,” I said. I explained that I make my living by writing about personal finance. “How long did it take you to save for this trip?”

“Hold on,” I said. I pulled out my notebook and pen. “I want to write this down. I have a magazine column due in a couple of weeks, and the topic is smart saving. Can I use you as a source?”

“Sure,” she said. We chatted about how she’s saved and where she’s traveled and what she’s seen along the way.

“This bus is taking longer than ninety minutes,” I told Nick.

“I think maybe we’re there,” he said as the bus pulled to the side of the road. The driver motioned for us Americans to get off…and to climb aboard a dolmuş. After thirty more minutes, our “ninety minute” trip to Pamukkale was over.

I did a mental calculation. Three-and-a-half hours by bus to our destination and another 3-1/2 hours to return. That’d be nearly as much travel as we did yesterday! I hoped the hot springs would be worth it. 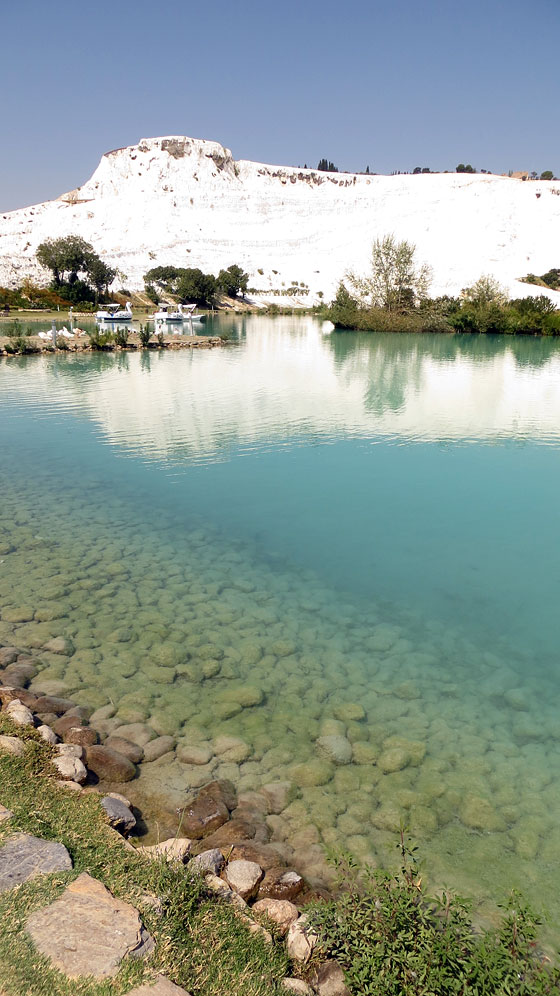 Looking up to Pamukkale

Pamukkale, meaning “cotton castle” in Turkish, is a natural site in Denizli Province in southwestern Turkey. The city contains hot springs and travertines, terraces of carbonate minerals left by the flowing water.

In plain English: Pamukkale is a vast white hillside with streams and pools that have been depositing white minerals for thousands of years, creating an amazing landscape that looks like a snowy hillside, but which is really nothing but rock.

Pamukkale is a World Heritage Site, and for good reason. It’s beautiful.

Your humble author at Pamukkale (photo by Nicole)

After our 3-1/2 hour trip, we spent the next 3-1/2 hours wading through the mineral pools. We could have spent much longer. Nick went off on his own while Linda, Dustin, Nicole and I slowly walked up the hillside, chatting and taking photos. 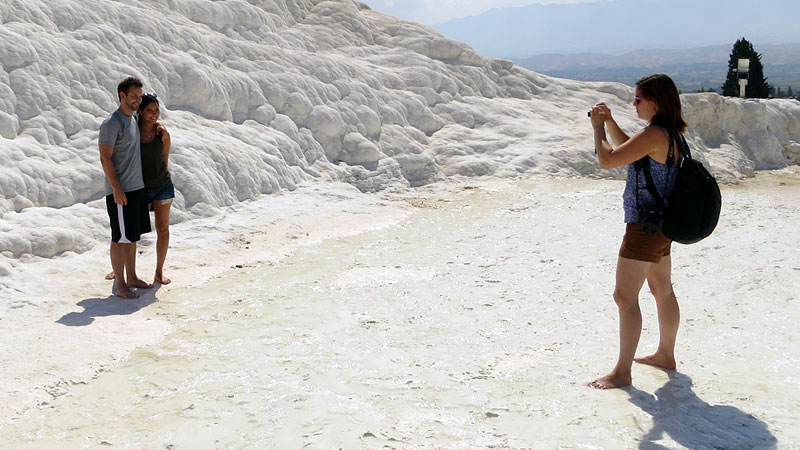 Dustin and Linda, posing for Nicole at Pamukkale

As four o’clock deadline approached, Nicole and I found Nick. Together, we walked down through the mineral pools. The cool water and the soft white mud were refreshing.

We reached the station just as the dolmuş arrived. “Is this the bus to Fethiye?” Nicole asked. The driver said it was, but we couldn’t tell if he was telling the truth. She climbed aboard anyhow. The dolmuş made its way to the nearest bus station.

As we got in line for the bus back to Selçuk, Nicole left to find her bus to Fethiye. But it wasn’t there. “It’s left already,” she told us. “It’s gone.” But she didn’t seem panicked. She’s been traveling for six months, after all. And she’s been to India.

“There’s probably another bus,” I said. There’s always another bus. She went inside the station to buy tickets. (Nicole, if you’re reading this, please let us know you’re safe.) Nick and I boarded our bus and settled in for the 3-1/2 hour trip. I wrote. Nick watched Turkish movies with the sound turned off. 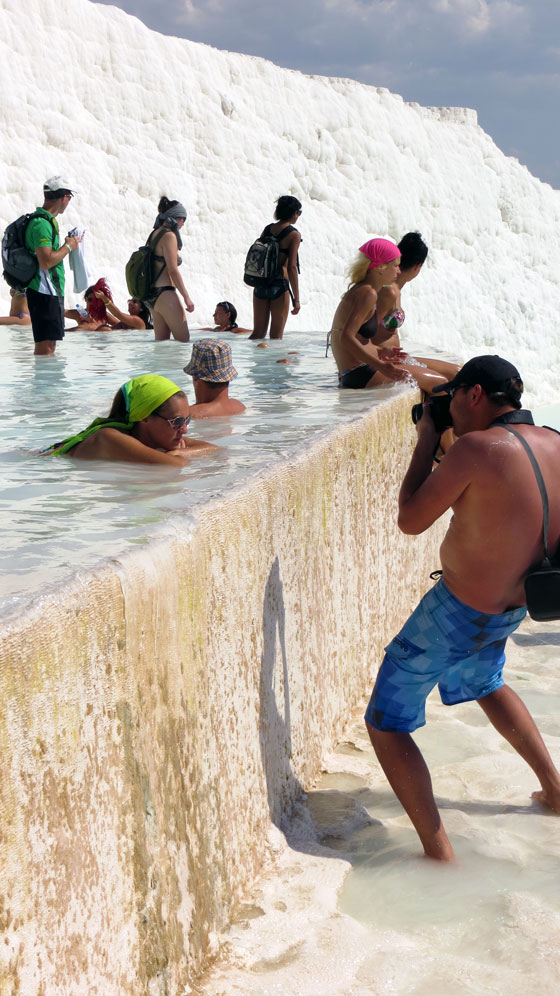 As we rode into the darkening dusk, I couldn’t help but think back on a tiny event at the start of the day. When I left Nick at breakfast, I went upstairs to shave. As I shaved, I watched my talk from World Domination Summit.

In that speech [full transcript], I talked about personal transformation and about how I’ve grown and changed over the past five years. One of the key parts of my development was learning to say “yes” to the things that people offer me.

And here I’d just had a marvelous day — seen a World Heritage Site, taken some fun photos, made some new friends — all because, once again, I’d overcome my initial urge to say “no” and had said “yes” instead. I could have stayed to rest in the hotel room, but instead I had a small adventure. Lesson learned.

But I still need a rest day!

Postscript: Just for kicks, I tracked down a list of the 962 World Heritage Sites (as of 2012). I’ve visited 25 of them, including two already on this trip (and two more to come — one in Turkey, and one in the U.S.). Sounds like I need to more travel!