Deep in my heart, I have a lot of liberal sensibilities. I own some conservatives beliefs, it’s true, but mostly I subscribe to a set of philosophies that would be considered progressive. Open-Minded. Liberal. Even so, there are times I have to shake my head in disbelief at some of the stuff I watch and read from supposedly like-minded people. If similar books and movies were put out by conservatives, they would be mocked to high heaven. The recent film North Country is a case in point. 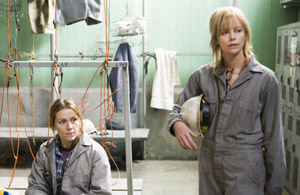 North Country was released in late 2005 to moderately good reviews (though most came with reservations). The Amazon summary:

A sterling cast and vivid direction give North Country an emotional heft to match its political convictions. Charlize Theron plays Josey Aimes, who goes to work at a Minnesota steel mine after splitting with her violent husband. But the job proves to be almost as harrowing as her marriage; the male miners, resentful of women taking jobs, verbally abuse and play humiliating pranks on the female miners. After being physically assaulted by a coworker, Josey tries to fight against the harassment, but none of the other women will join her case for fear that things will only get worse. North Country, directed by Niki Caro, makes the women’s experience palpable for the audience without overdoing it. But the lawsuit is only part of the movie; the gut impact of North Country comes from the devastating effect the lawsuit has on Josey’s family, friends, and coworkers—thanks to an incredible ensemble cast that includes Sissy Spacek, Sean Bean, Richard Jenkins, Woody Harrelson, and the always powerful Frances McDormand. The courtroom histrionics don’t always ring true, but the family conflict is riveting and deeply moving.

This film is a fictionalized account of a real case, a case that played out over a span of twenty years. The film compresses this to two years, and the compression undermines its credibility. Do I believe that the real women from whom this story is drawn were subjected to harassment similar to that depicted in this film? Yes, I do. Do I believe it all of the despicable events portrayed on screen occurred within months of each other? Hell no. And to ask me to believe this is laughable.

North Country has all the subtlety of a sledgehammer. The characters are caricatures, cardboard cut-outs made to stand in for real people. Every man is an asshole, except the mercenary lawyer from New York, who’s not good, just not an asshole. The situations often feel contrived. Anything bad that could possibly happen to the main character happens. The script is tired and predictable, to such an extent that three times I knew exact lines of dialogue before they were even spoken. (And I’m not particularly good at predicting that sort of thing.) This film falls all over itself to make its point, yet simultaneously lacks the confidence that it can do so. It has no faith in itself, and most certainly no faith in the audience. It cannot resist repeatedly using footage of the Clarence Thomas/Anita Hill hearings. What’s wrong with that? This film ostensibly occurs during 1989/1990. The Thomas/Hill hearings occurred in the winter of 1991.

Director Niki Caro‘s first film was Whale Rider, a brilliant coming-of-age tale about challenging convention, with very real things to say about the strength of girls and women. It’s difficult for me to believe that the two pictures are from the same filmmaker.

“Maybe you should sleep on this entry,” Kris told me, when I told her I was going to write it. “You don’t seem to have a depth of appreciation for what some people have had to go through. You’re trivializing it.”

I don’t think that’s the case. I think that films like North Country trivialize the struggles people have experienced to achieve respect and equality. By creating some surrealist feminist fantasy of the world as misogynistic hell-hole, by exaggerating and distorting events to the point of the grotesque, by presenting everything in black-and-white, this story makes light of the struggle the real women faced. Give me a socially progressive work of fiction like Native Son over this crap any day.

“Oh brother,” I said to Kris just a few minutes into the film. “This film’s all about being anti-male, isn’t it?” It was just a guess at the time, but I couldn’t have been any more right. North Country is pure misandry.

(p.s. Read the wikipedia entry on Jenson v. Eveleth Taconite Co., the case on which this film is based. Now that sounds real, that sounds plausible, that sounds like a film I might have liked to have seen.)