I often meet Aly for Spanish lessons at the Peet’s Coffee at 37th and Hawthorne. There are a lot of interesting things to see there. Sometimes there’s a group of young men skateboarding on 37th, blocking traffic and the sidewalk and getting cranky when people ask them to stop. There are often petitioners. For some reason, there are plenty of tourists here. Once there were young women giving free hugs.

And yesterday there was a bare-footed man in dirty clothes, smoking cigarettes and sitting on the newspaper dispenser. He was rather surly and a little…strange. At one point, he took a handful of coins from his pocket and tossed them to ground just outside the window from which I was watching. (Well, I was studying Spanish, but I was also keeping an eye on him.) The young man smoked and stared as people bent to pick up his quarters and dimes and nickels. I’m not sure what was going on there.

But the best thing I’ve ever seen at this corner was a dog. He’d lost the use of his back legs apparently, so he moved around on a makeshift cart. I snapped this photo with my iPhone: 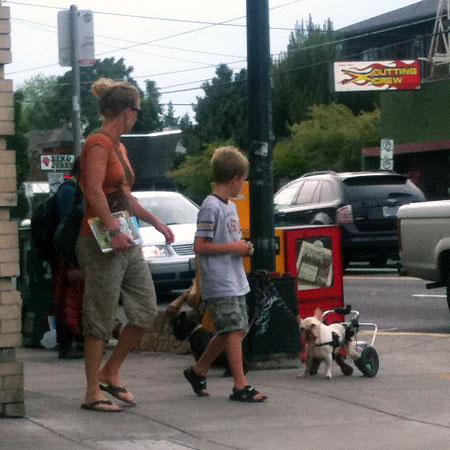 “Whatcha starin’ at, boy? Ain’t never seen a dog with wheels before?”