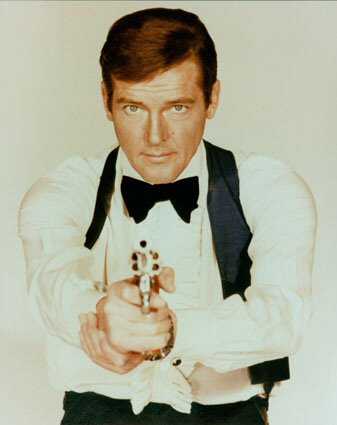 Roger Moore does a good job, injecting some personality into a Bond that Connery had been making more-and-more bland. But Moore is, in many ways, a debonaire priss. He runs like a girl. When he’s trapped on a small island surrounded by crocodiles, you know his escape won’t involve dirtying his white suit. (Connery would have stripped to the waist and wrassled his way out.) For some reason, I have a fondness for the film’s extended boat chase, which features the comic antics of Sherrif J.W. Pepper and his friends. (“What are you? Some kind of doomsday machine, boy?”) As with many Bonds, there’s stuff here that doesn’t make sense. Bombing poppy fields? Do tell. A magnetic superwatch that discriminates, attracting only the metallic object Bond wants at the particular moment! After the amateurish ‘clawed man’ bends Bond’s gun, Kris said: “The special effects are awful — it’s like they’re not even trying.”

The Man With the Golden Gun (1974) – Roger Moore [6.6] – C
The Man With the Golden Gun has a reputation as one of the worst Bond films. It’s certainly not good, but it’s not as bad as some of those that have come before. The real problem is that it’s just not very entertaining. It’s dull and nonsensical. But it’s not outright bad. The James Bond franchise at this stage has lost its way. It used to be about a British spy. Now it’s about a glamorous playboy with a gun, a sort of suave Batman. There aren’t as many melee scenes with Moore as Bond. That’s a good thing. He’s utterly unconvincing in fight scenes. Christopher Lee is a fine actor, but I don’t like him as the villain here. And I’ve never been a fan of Hervé Villechaize (Tatu from Fantasy Island — here the villain’s henchman). Fortunately the ending doesn’t contain a mass fight. Unfortunately, it contains a lame exploding lair.

Moonraker (1979) – Roger Moore [6.1] – D+
Let’s capitalize on the sci-fi craze! This film features an exciting opening teaser with Bond plummeting through the air without a parachute. 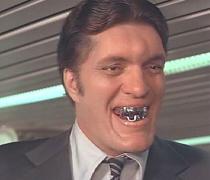 (This teaser is undone by the mysterious re-appearance of Jaws, and his stupid crash into a circus tent.) The theme song (and the title sequence) are actually rather lovely. (The song is from Shirley Bassey, who also did the themes for Goldfinger and Diamonds are Forever.) Lois Chiles plays Bond-girl Holly Goodhead, but she does so poorly. Her delivery is unnatural — a wooden plank would do a better job. This film starts fine, but the quality drops once the scene shifts to Venice. The pacing is poor, the acting is poor, etc. It’s baffling that somebody (or more than one) believed Jaws was worth bringing back for a second trip. The product placement in this film comes fast and furious. There are at least a half dozen musical tributes to other works (not all of them films). The film degenerates into a collection of set pieces. This is Moore’s worst outing yet. The film isn’t a complete loss — elements of the story are interesting — but the quality of the components are piss-poor. The climax is one of those mass battles I hate so much, but it’s the worst ever: mass battle in space! So dumb.

I suspect this one sequence is the source of much of the Austin Powers Dr. Evil schtick. After the teaser, things improve. The title song is lovely. The beginning of the film is odd by Bond standards: I can’t put my finger on exactly what is different, but the pacing and the style are more normal than usual, as if the film were just a normal Hollywood drama. This is going to seem like odd praise, but the editing in this film is quite good, and under difficult conditions. Seriously. I also like the fact that there aren’t many gratuitous explosions. Melina is a rare strong Bond woman. I like strong Bond women. (As opposed to say Bibi, a minor character here, who is painful to watch.) For Your Eyes Only suffers from a flaw that many Bond films had by this time: there seem to be an unending series of fight scenes strung together by tenuous threads. The bad guys often seem to know where Bond is (or will be) by some mysterious psychic ability. It’s bizarre. And not fun. Still, this is far less cartoonish than most of the Bond films leading up to it. The ending is particularly good.

Octopussy (1983) – Roger Moore [6.5] – C
This film is not nearly as bad as its reputation. It’s an average Bond film. There are some great scenes (I like the fight on the train). The worst aspect is the acting, which is atrocious in parts. There are also some woeful improbabilities, but then that’s par for the course. The opening teaser is bad by any standard. The story seems to be a patchwork, which makes sense since this was constructed not from an Ian Fleming novel but a series of short stories. This movie isn’t nearly as good as For Your Eyes Only, but it’s no worse than most of the Roger Moore films. Kris’ evaluation of the climactic battle: “This makes no sense. Why is there a trapeze in the castle? This whole thing is so juvenile. I don’t understand why you’re watching these all.”

A View to a Kill (1985) – Roger Moore [6.0] – C
This is Roger Moore’s worst outing as Bond, and that’s saying something. Throughout his tenure he brings but one quality to the role: he’s suave. In every other regard, he’s completely lacking. He possesses no athleticism; Roger Moore fisticuffs are laughably lame. He has no charm. He has no screen presence. And here, at last, he’s beginning to show his age. Moore was 57 when this was filmed, but he moves like a man many years older. It’s too bad. The core story and script here are good for a change — this is a return to Bond as secret agent instead of Bond as superhero. With a competent director and some good acting, this might have made a decent Bond picture. But the directing is plodding and ham-fisted. Christopher Walken is awful as the villain here — his line readings are made apparently at random. What is he trying to portray? A mid-eighties actor high on cocaine? A nice title sequence (with accompanying Duran Duran hit song). We see very little of the normal Bond supporting cast. They frame the story, but the bulk of it is Bond on his own.

A note on directors
In the world of James Bond, the director plays a huge role in determining the quality of the film. Terence Young directed three of the first four Connery films. He was absent for Goldfinger, which was the weakest of the four. Goldfinger was directed by by Guy Hamiltion, who also directed Diamonds are Forever, Live and Let Die, and The Man With the Golden Gun. All four of Hamilton’s films share similar flaws, and they’re not nearly as good as those directed by Young. But he’s not as bad as Lewis Gilbert, who brought us the duds You Only Live Twice and Moonraker (as well as The Spy Who Loved Me). The end of the Roger Moore era going forward features direction from John Glen, who shows some promise if he can only shake his need for the nonsensical.

Next month: the Pierce Brosnan era, which is virgin territory for me.