Saturday we drove down to Shedd, south of Corvallis, for a gathering of the Noah Roth clan.

When I was a boy, the extended family would gather at Grandma and Grandpa’s house on regular basis. It was easier then. The three siblings (and their families) lived within an hour’s drive. I remember summer afternoons whiled away on the farm — which was a quarter mile down the road from our trailer house — in the company of all my cousins. Those were magical times.

As we grew older, and as people began to die, the extended family gathered less and less often. For a decade, we didn’t get together at all. About six years ago, however, we all came together one day in late fall for a potluck meal at Tammy’s house. Since then, we’ve met at least once a year, sometimes more. Last year, Kris and I hosted the family reunion. This year my cousin Scott held a pig roast. 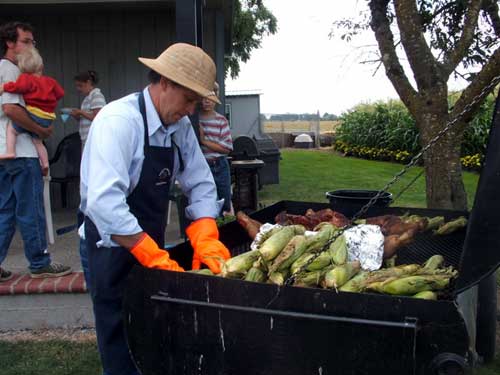 Kris attends these gatherings with a bit of trepidation. She doesn’t know anyone, and the family culture is foreign to her. Most of my Aunt Virginia’s family — which makes up the bulk of attendees — is conservative Mennonite or some variation thereof. But Kris had a good time on Saturday: she talked with Uncle Stan about family history, she played volleyball, and helped eat pig and ice cream. 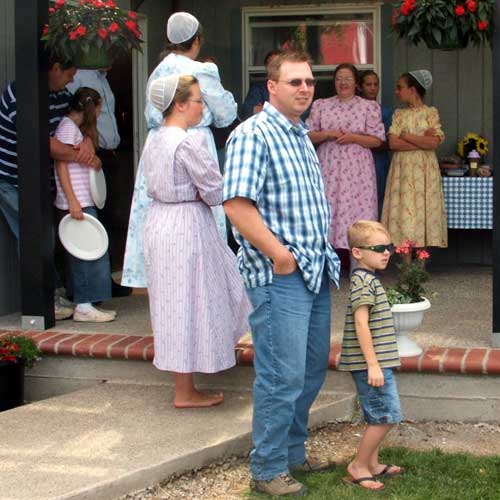 Here’s what a Mennonite family reunion looks like circa 2007. It’s not much different than it looked circa 1977. (This video was taken with my spiffy new ultra-compact digital camera.)

As we were preparing to leave, Kris decided that she needed some plums. The ladder wasn’t handy, but that’s okay — Scott had a forklift ready to go: 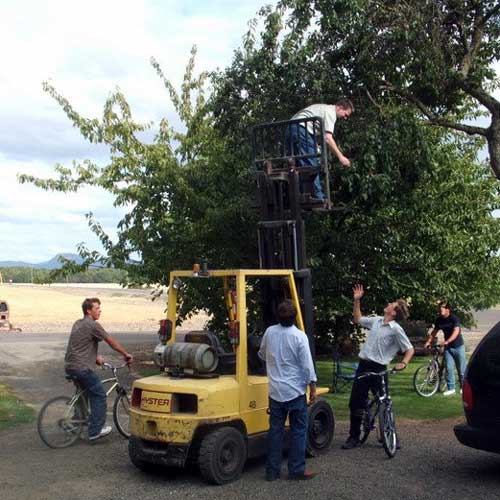 “That was fun,” Kris said, as we left the reunion.

“I was hoping you’d say that,” I said. “This gathering was perfect. It’s just like I remember the gatherings from my youth. This is what it feels like to get together with family.”

Whatever the case, I’m glad that Kris had a good time. I look forward to next year’s reunion, wherever that might be.

In the evening, we drove from Shedd to south Salem for dinner with Mac and Pam. It’s been a long time — years — since we had a nice meal with just the Proffitt-Smiths. It was great to do so again.

We toured their house, looking at all the work they’re doing, both inside and out. Inside, they’re currently remodeling the master suite. The project has been going on for months. As those of you who have done (or are doing) remodeling projects of your own will understand, they’re tired of sleeping in the living room.

Outside, Mac has been ripping up and chopping back the overgrown hedges. Pam has been working to turn one field into a productive garden — it’s come a long way from just last year! They have seven chickens now.

As the others prepared dinner, I sat and read to Megan (whom I’ve dubbed “Lulu”). She wanted to hear about the animals of Hawaii, and about counting, and about a mouse who turned into a tiger.

I was hoping I’d get to see her in a fit of rage: 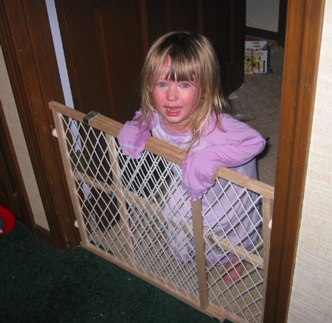 Luck was against me, however.

It was a lovely evening, a perfect end to a lovely day.