“What are you going to do today?” I asked Nick this morning at breakfast. It’s our last day in the Cappadocia region of central Turkey, and we’ve already done most of the touristy stuff.

“I think I’m going to hike up to the Open Air Museum,” Nick said. “What are you going to do today?”

“I think I’m going back to Avanos to buy those cute shoes,” I said, wincing at the fact that I was calling a pair of shoes “cute”. “Plus, I’m going to rent a scooter and just ride.”

You see, Kim (a.k.a. The Girl) is an avid motorcycle rider. In the nearly six months we’ve been dating, Kim has sung the praises of motorcycles many times. In June, she and I joined Jenn and Cody one Saturday afternoon to sit on the bikes at a local Harley dealership. Kim doesn’t have a bike now, but she wants one. (She’s had one most of her adult life.) 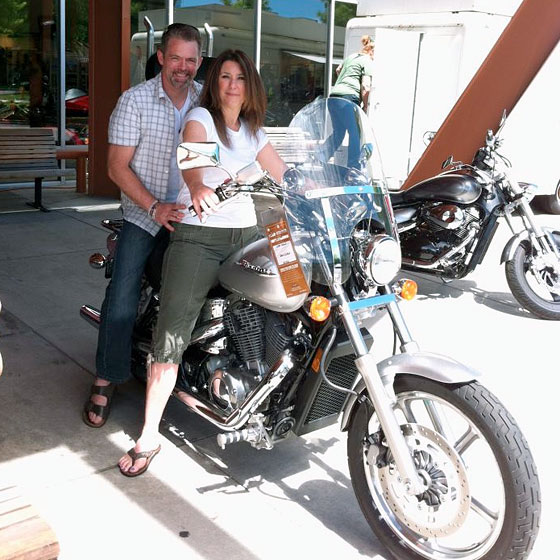 Sitting on Harleys with Kim

I, on the other hand, have little experience with motorcycles. I have lots of experience riding bicycles, but not bikes with motors. When I was a boy, my friend Torey would take me for rides on his dirt bike from time to time, but I have no concept of how to operate a motorcycle. I want to learn, though, and a scooter seems like a good first step.

There are tons of places to rent scooters here in Göreme. For 40 lira (about $20), you can rent a scooter (or a motorcycle or an ATV) from dawn ’til dusk. So, that’s what I did today.

The first place I tried to rent a scooter wouldn’t let me take one out.

The next shop owner I approached was happy to rent me a 100cc Yamaha scooter. He took my money, gave me a brief lesson (“Lights here. Accelerate here. Brakes here — only use left brake, no right.”), handed me a helmet (which was pointless because the chinstrap was broken), and I was on my merry way.

It took me about half an hour to get comfortable with the scooter. I took it on a deserted dirt road to get familiar with how it handled and maneuvered. After that, I gained confidence quickly. And soon I was in heaven.

I zipped through Göreme and Çavuşin and Avanos, and then headed out into the countryside. I passed the ranch where Nick and I rode horses on Monday. I wound my way through the hills, climbed to the top, and descended into the vast swaths of farmland beyond. 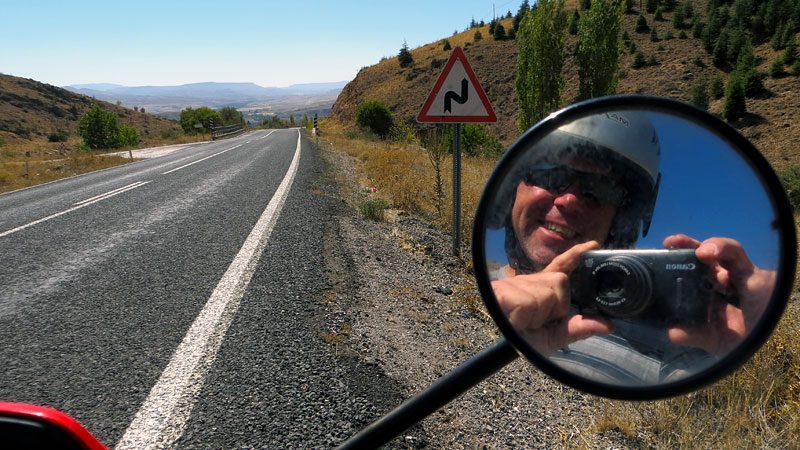 Climbing the hills outside Avanos — curves ahead!

As I rode, I relished the warmth of the wind on my face, the smell of the earth and the grass and the trees, the staccato stutter of the scooter’s tiny engine. I loved the feeling of being outside in the scenery instead of inside a car looking out. It reminded me of this passage from Zen and the Art of Motorcycle Maintenance:

You see things vacationing on a motorcycle in a way that is completely different from any other. In a car you’re always in a compartment, and because you’re used to it you don’t realize that through that car window everything you see is just more TV. You’re a passive observer and it is all moving by you boringly in a frame.

On a cycle the frame is gone. You’re completely in contact with it all. You’re in the scene, not just watching it anymore, and the sense of presence is overwhelming. The concrete whizzing by five inches below your foot is the real thing, the same stuff you walk on, it’s right there, so blurred you can’t focus on it, yet you can put your foot down and touch it anytime, and the whole thing, the whole experience, is never removed from immediate consciousness.

Twenty kilometers (12.5 miles) outside of Avanos, I stopped at the edge of a field. I was alone on a warm autumn day. It was peaceful. Quiet. Relaxing. Though a part of me pined to be home (I miss The Girl), another part of me was happy to be here, now, in this moment. 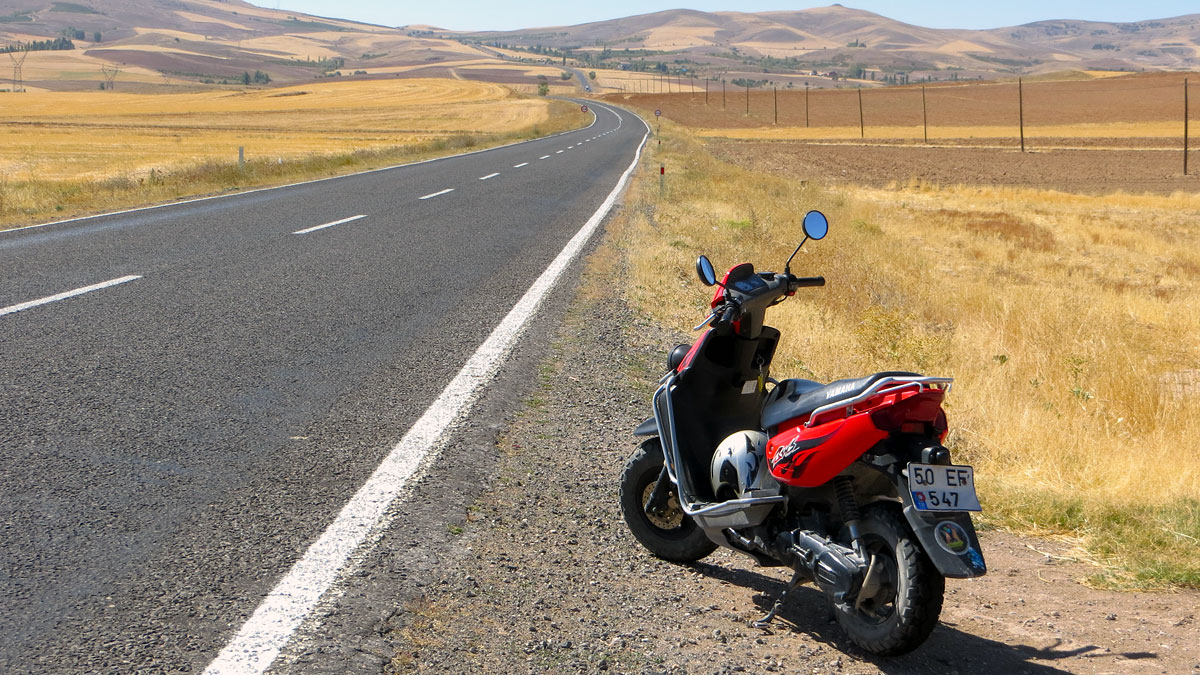 Alone in the farmlands of Cappadocia

After fifteen or twenty minutes of meditation, I hopped on the scooter and returned to town. After buying my cute shoes, I buzzed to Göreme and rode up the hill to Uçhisar, where I did a little souvenir shopping. I took the long way back to the hotel, dropped off my stuff, and then headed out for another ride.

At the edge of town, I spotted Nick sitting on a bench, waiting for the bus to Ürgüp.

“Will that thing hold both of us?” he asked.

I quickly learned that while a 100cc scooter might feel nimble with one person on it, it feels like a slug when two people ride it. What’s more, the handling is completely different. I felt as if I were steering a hippo. We s-l-o-w-l-y made our way out of town on the cobblestone streets and began to climb the hill past the Open Air Museum.

“That sign says there’s a 10% grade ahead,” I shouted to Nick. “I don’t know if we’re going to make it.” And we didn’t. In fact, as the scooter sputtered and gasped at the steepest part of the climb, we almost went into the ditch. I couldn’t control the bike. Nick had to get off and walk about 100 meters while I got past the worst of the hill. After that, the last nine kilometers to Ürgüp were uneventful.

When I dropped Nick off, I drafted him to take a photo: 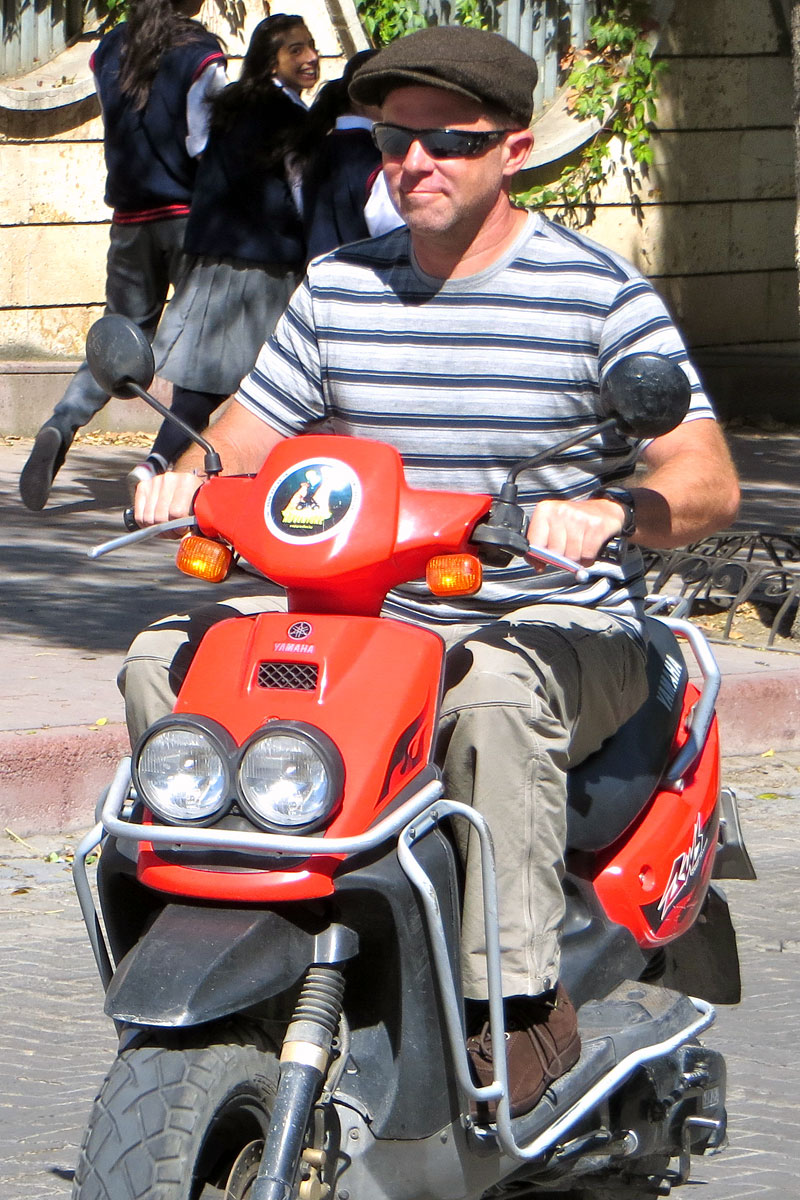 Nick had an English/Turkish exchange with the girls behind me

On the ride back to Göreme, I tried to see how fast the scooter would go (answer: 97 kilometers per hour, or about 60 miles per hour). I also learned that going down a 10% grade on a cobblestone street is tough to do on a scooter.

The only bad thing about the entire scooter experience came at the end of the day. Before I returned it, I had to fill the gas tank. But there are no gas stations in Göreme. The nearest one is at the top of the hill in Ortihisar, about 5km away. To get there, I had to traverse that same 10% grade again — this time at dusk with a horde of tiny bugs swarming the valley. They kept getting in my eyes and nose. By the time I’d fueled up and returned to the hotel, I was covered with little black dots — bug corpses. Gross, huh?

This was a successful test. When I get home, I intend to sign up for a training course so I can get the motorcycle endorsement to my driver license. And who knows? Maybe come spring, I’ll be riding a motorcycle through the Oregon countryside with The Girl.