Over the past month I’ve made a few miscellaneous screenshots with the intention of writing larger articles about what they demonstrate. I haven’t found the time. Instead, I’ll post them here, for a lark.

Here’s what a Digg spike looks like in the short term: 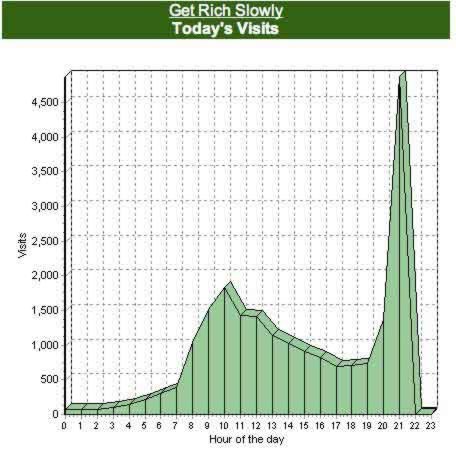 As you can see, traffic was already high for this day. (My normal daily traffic is ~350 visits/hour.) I can’t remember which day and entry this graph is from, but I suspect the first big bump is Lifehacker-related. Then comes a late-evening Digg spike.

Digg traffic is a blessing and a curse. It’s always great to have thousands of people visit your site. But most Digg users are not in the target audience for Get Rich Slowly. They get to the site and they think it’s lame. That’s fine. But meanwhile they’re hogging up the bandwidth and, especially, the clock cycles that could be spent serving the site to somebody who cares. In fact, some Digg waves are so strong that they mess up a site something awful! 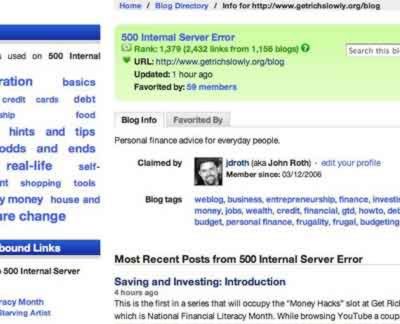 Basically, when a Dreamhost-based site is swamped by the Digg effect, the server struggles to keep up. Dreamhost may “throttle” a site, effectively limiting the number of requests it can process each second. When that happens, you can get goofy things like the image above. That’s the Technorati profile for Get Rich Slowly, which I retrieved in the middle of a Digg flood. You’ll note that GRS is now the blog called “500 Internal Server Error”. I love that.

What does a Sitemeter graph look like after a site has been dugg three times in a month? 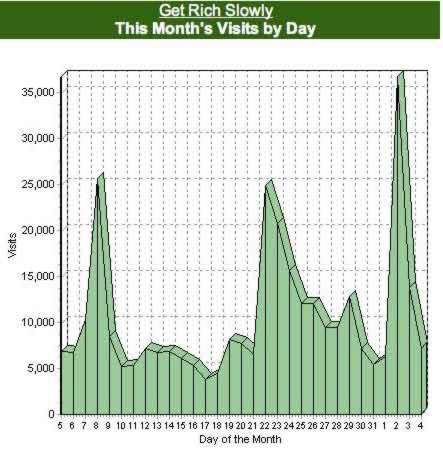 To me, that’s jaw-dropping. Maybe Trent and Ramit have sustained traffic levels at a third of a million visitors per month, but I don’t. It’ll probably be a long time before I see trafic like that again.

There’s a lot of talk about how Digg visitors aren’t “sticky” — they don’t click ads, they don’t browse beyong the dugg page, and they don’t subscribe. The first two are true, but I’ve actually been pleasantly surprised by my subscribership numbers. Readers by RSS feed jumped 50% from the beginning of March to mid-April. E-mail subscribers nearly doubled. I suspect the Digg appearances had a lot to with that.

Finally, after the MBN forums were abuzz with an upcoming Pagerank adjustment, I decided to check how my sites would fare by using a Pagerank prediction tool. Imagine my surprise when I discovered that Animal Intelligence was going to rank as high as Google itself!

Now that I’ve written about these images, I can finally scrub them from my hard drive!

I have a friend who is starting a niche personal finance blog. He’s very interested in the subject, and knowledgeable, and I think he could make it an interesting site.

When the idea first came to him a few months ago, he approached me. “How do I make this a successful blog?” he asked.

My friend went away for a few weeks to work on his site. When I talked to him again he told me, “I’ve switched from WordPress to Drupal. Do you think that’ll make a difference?”

“It’ll make no difference at all,” I said. “Readers don’t care what weblog tool you use. All they care about is the content.”

“Yeah, but Drupal offers so many more features,” he said. I just shook my head.

About a month ago, he launched his site. He posted an introductory article. “Looks good,” I said.

“Can you point people to the site?” he asked.

Meanwhile he put up some Google ads and some Amazon ads. He posted a single link to another article at a big news site. I talked to him a couple weeks later. “Nobody’s coming to my site,” he told me. “Not a single person has clicked on an ad.”

“That’s because there’s nothing there,” I told him.

“What do you mean?” he said. “I spent a lot of time creating the layout and putting up the ads.”

“You need to focus on content,” I told him.

So he wrote another article. It was moderately interesting, but it was all in one h-u-g-e paragraph. That was on February 21st. There’s been nothing new posted to the site since then. The site layout has changed a half-dozen times, though, as my friend looks to make it as pretty as possible.

He IMed me last night. “Nobody’s coming to the site,” he said.

“Maybe in a couple months,” I said. “Maybe once you have some content.”

This concept has been beat into the ground a thousand times before, but it’s the single most important factor in creating a successful weblog: To gain readers, you must publish quality content on a regular basis. Sure, readers like a pretty site. Sure, it would be nice if there were ads for them to click on. But all of this is secondary. All that really matters is the content.

That, my friends, is all that you ever need to know about blogging.

It was late in 2006 that I realized I could potentially make a living writing for the web. It wasn’t until a few months later that I knew that this was true. I earned a modest (but decent) income at the box factory. But starting in February 2007, my web income began to equal my income from my real job for brief periods of time. Then in April 2007, I earned more from my websites than from selling boxes. And from July 2007 on, I’ve been a professional blogger.

Over at 2blowhards (still one of my favorite blogs), Michael writes:

I used to want to get rich off writing sci-fi or fantasy. Then I decided I just wanted to get rich off writing books — I didn’t care what kind. More and more, it’s clear that I may never publish a book (at least not in the traditional sense)! I’m already making twice what a sci-fi novelist makes, and I have complete control of my content. There’s little motivation for me to change directions at the moment.

Some people — and perhaps you’re one of them — look upon web income with disdain. “You’re not making money from writing,” is a common observation. “You’re making money from advertising.” I can understand this delineation, but it’s not one that I make.

I am writing, and publishing that writing, and it’s making me money. I don’t feel guilty about it. I don’t feel as if I’m compromising anything. Did I ever dream I’d make a living writing about personal finance? Nope. But now I can’t imagine anything else I’d rather be doing.

Remember: The core of this article is more than two years old. Numbers stated do not represent current earnings.