When we moved into Rosings Park, we knew we were in for more maintenance — we just didn’t realize how much. Our house in Canby wasn’t that big of a deal. It was a 1976 ranch-style home that had recently been updated. We didn’t need to do a lot of work on it.

Rosings, however, is over one hundred years old — and it shows it in lots of little ways.

One of those ways is the paint. Apparently it had been painted not long before we purchased it (three years before?), but that didn’t really matter. According to the painters we had bid our recent project, it hadn’t been properly painted in decades. (Maybe they say that to all prospective clients, though.) Layers of paint had been added one on top of the other. Nobody’d done a proper job of stripping things.

To make matters worse, when the roof was done before we moved in, somebody took a shortcut with the flashing. As a result, there were two spots on the corners where water had literally been seeping into the walls for the last five years. Not good. Aside from other potential damage, the moisture had caused the paint to peel: 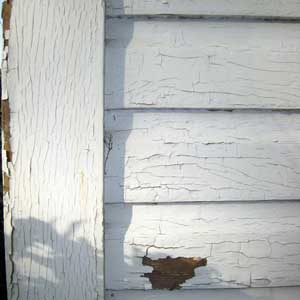 Kris and I considered painting the house ourselves, but not seriously. Kris is busy, and so am I. Technically, I’m home all day, but in reality, I’m working. Plus, this sounded like a bitch of a job. Instead, we hired Leo and Mike to do the job for us. (We’d used them for another job earlier in the spring.)

It took them over a week, but when they’d finished, our house had been scraped and painted. It looks brand new!

When we hired them, we said that we would paint the porches. It took us a while to get around to it, but finally last weekend, Kris and I made the time. 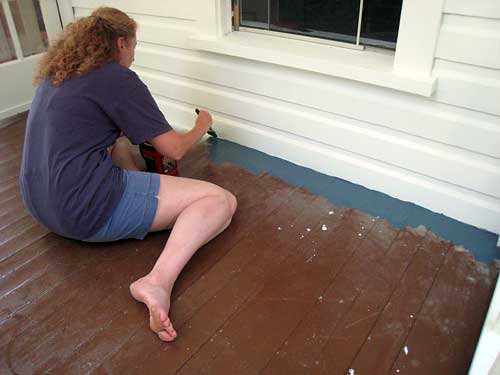 The back porch (the “smoking porch”) was brown before. Now it’s a steely blue. The front porch, too, is a steely blue instead of its former grey. 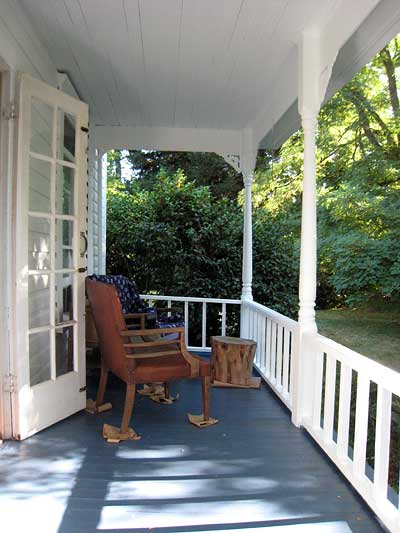 This is how I felt the year after we moved in, the year we had the bathroom remodeled. We spent so much time and money on it that I wanted to take the next year off from any projects. No projects in 2010! — that’s my motto.

But we’re not done with 2009 yet. We still have the “Man Room” to furnish. That won’t take much time, but it’s going to take some money…