On my drive home today, a dragonfly struck the window of my Mini Cooper. Curiously, the impact did not kill the creature, though it certainly was stunned. Instead, its tail somehow became tucked beneath one of my wiper blades.

I was sad to see it happen, but I didn’t do anything about it. What could I do? It looked alive, but I couldn’t be sure. And what good would stopping the car do? I figured it would be dead by the time I got home.

As I unloaded the groceries, I noticed the dragonfly was very much alive. It was flailing to escape from the wiper’s grasp.

“There’s a dragonfly under the wipers. It’s still alive, and I can’t bear to look at it. Can you take care of it?”

I know this is a reversal from typical gender roles, but that’s how it is in our house. Kris deals with death and destruction all day long. I write about the psychology of money. I’m the sensitive one; Kris is matter of fact. Killing insects is her province (though I’m responsible for spiders.)

She carefully freed the dragonfly and held it in her hand. “One of its wings is broken,” she said.

“What should we do?” I asked. She gave me a look as if to say that I shouldn’t be such a baby.

“Don’t worry about it,” she said. “It’s just a dragonfly.” She hung it from a clerodendron blossom. I tried to ingore the thing as I went about my business, but I couldn’t. I found its plight heartbreaking. I stood by and watched it closely for several minutes. 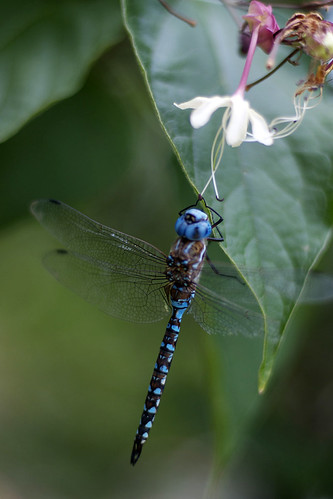 The dragonfly was beautiful, a sort of crystal blue with deep liquid eyes and lace-like wings. It was conscious and active. It gesticulated with its forelegs, it rotated its head, it vibrated its wings.

Eventually, it made a futile attempt to fly, but merely swooped to the grass. The dragonfly could walk just fine, but could not take to the air.

A part of me knows that it’s ridiculous to be so concerned about an insect. Eventually, I had to leave. I don’t want to know how this creature’s story ends. Its destiny seems clear enough. It’s a shame that something so beautiful cannot live forever.

Postscript: Now I know how this dragonfly’s story ends. Simon finds it and eats it. Alas, poor dragonfly.