Kris and I are a planning a trip to France and Italy next autumn (meaning: autumn 2010). Details are vague and sketchy right now, but we’ll put our plans together over the next few months.

One thing we both want to do, though, is to learn French. Kris had four years of Spanish in high school, and I had a total of 2-1/2 years of German and one semester of Spanish in my educational career. (Plus I tried to teach myself Latin five years ago.) But neither one of us is really conversant in a foreign language. That’s a shame.

For the past few weeks, I’ve been researching options for learning French.

Of these, I think the community college classes would be most effective. Unfortunately, that’s also the least convenient way for us to learn. I kept hoping for a better solution.

Then I began to notice that many people praised Rosetta Stone, a computer-based language program. 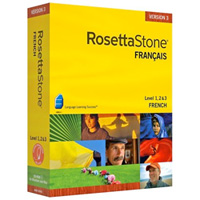 I’ve seen the Rosetta Stone ads in magazines for years, but never really paid attention. And when I saw the price for the software ($450! On sale!), I just about died.

Last weekend, Kris and I went to see a movie at Clackamas Town Center. Afterward, we wandered the mall. We haven’t been in a mall in years, and it seems like a foreign place to us now. It’s like a different world.

One of the new things that seems to have sprung up is the endless line of kiosks down the center of the mall walkways. These places are staffed by aggressive salespeople looking to hawk their wares. Except at Clackamas, there was a Rosetta Stone kiosk with a decidedly non-aggressive salesperson. We stopped to look at the software. After a ten minute trial, we bought it.

Rosetta Stone uses an “immersion” method to teach languages. You install the core software on your computer, and then you can add language packs. These language packs are designed to immerse you in the language. There’s no English involved at all.

The exercises all use big photographs of people doing stuff. There are various exercises related to these photographs, and there’s a hell of a lot of repetition. One photo might show a man reading, for example. In the first lesson of a unit, you’d simple look at the photos and listen to a native speaker give you vocabulary. (The reading man would be: “L’homme lit.”) 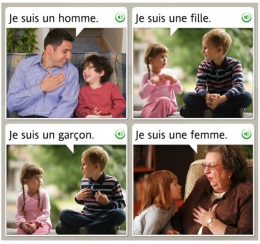 There are vocabulary lessons, reading lessons, writing lessons, and more. There’s never any explicit grammar lesson (you’re not taught about gendered nouns or the dative case, for example), but instead you’re expected to pick up the grammar buy perceiving the difference any sentence structure in various contexts.

Kris and I have been using Rosetta Stone for the past few days. It’s fun. And effective. Our French knowledge is very limited, but it’s fun to use what we do know. When Max the cat hopped on the counter while we were making dinner last night, I was able to say, “Le chat cuisine.” We both found that funny. (Really le chat just wanted to mange, not cuisine.)

I’m a little skeptical that Rosetta Stone will provide deep knowledge, but I could be wrong. The first level only has four units, and we’re about to start the fourth unit already. Our vocabulary is very limited (colors, a couple of motion verbs, stuff to do with people), as is our grammar. I have high hopes that levels two and three have much greater depth and introduce much more vocabulary.

Actually, for our vocabulary, I’m planning to take a stack of sticky notes and sticky the hell out of the house. I’ll put a la table stick on the table, a de porte sticky on each door, and a la chaise sticky on my favorite chair.

With practice, Kris and I should be able to carry on a French conversation with Lisa or Laura (or Pierre!) before long.

Update: Haha. I’m so green at my French that I had the verb “to read” incorrect in the headline. I had “lis” instead of “lit”.