I had breakfast with Paul and Amy Jo yesterday morning at Broder on Clinton (which is apparently a sister restaurant to Savoy). Over baked eggs and Swedish pancakes, we chatted about life. I mentioned that Thursdays were my days for walking the 2-1/2 miles into Milwaukie and back. “I go to the comic-book store and have cheap tacos at Cha Cha Cha,” I explained.

“Have you checked out the railroad bridge into Lake Oswego?” asked Paul. Oak Grove is directly across the Willamette River from Lake Oswego, but there’s no easy way to get from one community to the other. It takes about 25 minutes to make the drive. It would be a two-minute drive if there were a bridge.

“I don’t think so,” he said. “There’s a pedestrian path on the side. And one of our neighbors used to work in Lake Oswego. She walked used the bridge to walk to work every day for years.”

Paul and I decided to check it out. Instead of walking into Milwaukie on the Trolley Trail, I would join him for an adventure into Lake Oswego. When I posted about our plans on Facebook, Tiffany warned: “FYI, It is a federal trespassing charge if you are caught.” We were undaunted.

I was a little more daunted, though, by the actual posted prohibition: 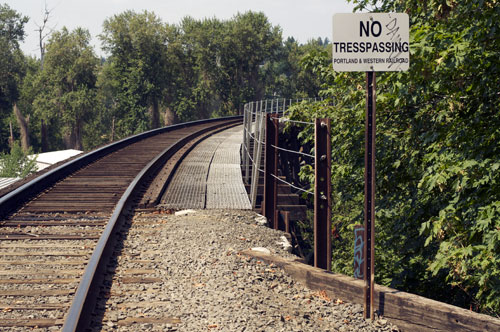 I think it’s funny that the Portland and Western Railroad have mis-spelled trespassing as “tresspassing”. Anyhow, because there were wide shoulders along the tracks, we played scofflaw and proceeded to the bridge. Where the rails were elevated above the ground, there was a metal grating along one side — the “pedestrian path” that Paul’s neighbor must have used to get to Lake Oswego.

We walked up to the bridge itself and snapped a few photos: 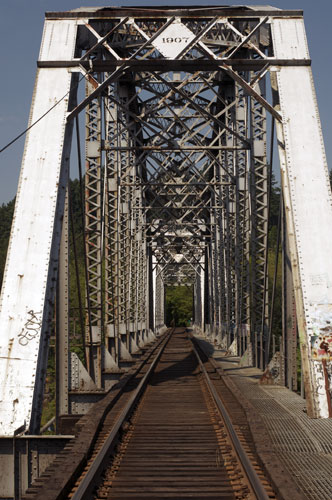 Rather than pull out where we’d started, though, we followed the tracks toward Milwaukie. It’s actually a lovely stretch of land, that mile beneath the bluff and along the shore. (Sorry, no photos.) Paul pulled out at Elk Rock Island, and I continued along the rails, across the bridge that goes over 99e and the lake, and into downtown. I didn’t see a train the entire time.

It was a fun walk, and I intend to do it again in the future. (The “to Milwaukie” part, not the “bridge to Lake Oswego” part. I may do the latter at some point, but not regularly.) On the way home, though, I played it safe and took the Trolley Trail.