My Thanksgiving was a little strange.

This was the first year that most of the family made a road trip to get together. My brother Tony moved his family to Bend in the middle of 2006, and it was their turn to host things. Early Thursday morning, Kris and I picked up Tiffany and then Mom, and we drove through Silverton, Stayton, Sisters, and on to an early turkey dinner. 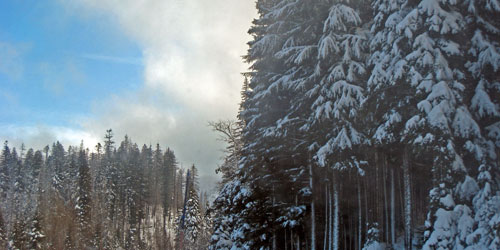 Tony and Kamie live in the same housing development as Kamie’s parents (“River Rim”, though there’s no river in sight). But David and Merre are in the midst of a nine-month swing across the U.S., selling horse cookies. Because their house is huge, the Roth family took it over to celebrate Thanksgiving.

The food was good, and the conversation too. But I was groggy. I felt totally out of step with the rest of the group. To make matters worse, I had a glass of wine, and then a little Scotch. Two drinks in three hours isn’t enough to get anyone intoxicated, but the additional sugar made me woozier yet. I went upstairs and drowsed off for a while. Then I went to bed early.

Despite feeling so lousy, I had a fun time.

This was the first I’ve ever really had a chance to know my neice Emily since she’s had a personality. I like her. I think she’s rather witty for a girl of nearly two. (A girl who does not speak.) I thought it was hilarious that she ate constantly the entire time we were there. She never stopped.

I also found myself enamored with T.J., the cockatoo who lives in the house. He and I became fast friends.

On our drive home, we made the traditional Sno-Cap stop in Sisters for burgers and fries. During both days of the road trip, we listened to the audio version of The Golden Compass, about which more later.