When I was a boy, I loved Star Trek. For nearly twenty years, Portland’s KPTV (channel 12) broadcast the series at 4pm every Sunday afternoon. We didn’t have a television for much of my childhood, but most of my friends did. Whenever possible, I would watch Star Trek.

When the series was released on DVD a few years ago, I bought the first season, but I never watched it. It’s been gathering dust.

A few weeks ago, I decided to make some clam chowder. This is a laborious process. Though I enjoy it, the work takes a couple hours, and much of it is mindless. “I should watch something on the computer,” I thought. “I should watch Star Trek.” And so I did. I’ve been watching one episode a night ever since.

Many of the early episodes are truly awful — there are good reasons the show struggled to stay on the air. But by the middle of the first season, things began to click. The writers and producers discovered their characters and figured out how to tell their stories.

I plan to do a full review of season in about a week, but I want to take the time to mention one of my favorite episodes: The Devil in the Dark. On an important mining colony, a mysterious creature is terrorizing the workers. This mysterious beast can move through solid rock, and it dissolves anyone it touches. Fifty men have died in just a few months. The Enterprise is summoned to eliminate the problem. 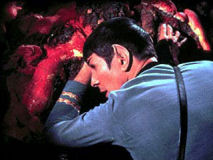 Initially, Kirk and company intend to destroy the creature. But, as he is wont to do, Spock begins to suspect that there’s something deeper to the problem. He’s right, of course. First of all, the life form is silicon-based, something that is seemingly impossible. Second, it is highly intelligent. And finally, it is merely defending its nest, which has been disrupted by the mining activities.

Watching the episode tonight, it was shockingly obvious that this is where my appreciation of inter-species friendship and communication originated. It was from watching this episode of Star Trek when I was a boy that I developed an appreciation for other animals, and began to suspect that other species might harbor intelligence that we, as humans, could barely comprehend. From there, it was only a small jump to similar philosophical positions.

Many of these Star Trek episodes don’t stand up well upon re-viewing. I haven’t seen them in twenty (or thirty!) years, and what I loved as a boy is sometimes almost unwatchable as an adult. (The Corbomite Maneuver is mind-numbingly bad.) But The Devil in the Dark is as good as I remembered. Amazing that much of the framework of the adult J.D.’s belief system can be traced to one hour of television made in 1965…