The Negative Saving Rate and the Age of Easy Credit

“My generation doesn’t know how to be thrifty,” writes Eve Conant in the current issue of Newsweek. She describes how her grandfather — who fled his native Ukraine during World War II — would store plastic bags filled with leftover bread crusts in the closet of his new home in California, a house he bought with $13,000 cash. “He couldn’t shake old habits,” Conant writes. “Or were they old virtues?”

Now, many decades after Arkady’s arrival, I also have plastic bags in my closet. But they’re filled with nice clothes I’m giving away because my wardrobe is too full. The biggest life issue facing me when I open my closet door is whether to put on an Ann Taylor jacket or a Gap sweater. As talk of recession and belt-tightening makes headlines, I wonder where and how I lost my grandfather’s sense of thrift.

These sentiments aren’t exactly new. For decades — centuries, even — people have complained that younger generations haven’t inherited the financial wisdom of their elders. During the 1750s, Benjamin Franklin bemoaned the lack of money skills among the American colonists. But these warnings took on greater urgency with the dawn of the age of easy credit. In the introduction to Ain’t We Got Fun?, Barbara Solomon writes:

Prior to the 1920s the public had held generally negative attitudes toward credit purchasing. Young people were warned against burdening themselves with a lifetime of debt and were made fearful of losing their possessions should they fail to make payments on time. In the Twenties all that was turned around.

Advertisers promised an acquisitive public that it needed no money down and could get liberal terms. Millions of ready buyers were convinced that there was no need to deprive themselves of the magnificent new appliances and machines of this age of progress. In 1927 six billion dollars’ worth of goods (about 15 percent of all sales) were bought on installment plans. And the factories kept on producing more merchandise.

The general sense of prosperity, coupled with the disillusionment of wartime idealism, became the basis of a new theme that dominated the age. The mass of Americans believed that they had an inalienable right to the good life and particularly to “a good time”. And a good time they determined to have.

Never before had a generation set out to be so self-consciously different from their forebears.

What had been one of American history’s recurring motifs now became a primary theme. Attitudes toward money, debt, and credit actually did begin to change. During the next several decades, the use of credit lost its stigma; it became an accepted — even celebrated — way of life.

In Conant’s Newsweek article (which I recommend highly), the author worries that this lifestyle of debt has made her generation ill-equipped to handle financial hardship. “How often do the words ‘frugal’ or ‘thrifty’ come up in conversation, especially as a compliment?” she wonders. From her story:

“People in their 30s haven’t really experienced a significant or long recessionary period,” says consumer behaviorist Larry Compeau of Clarkson University. “I am concerned that they won’t be able to respond quickly enough to mitigate what may be the damage ahead. Not only do people under 40 save less, but they have less to save.“

My worry is not that we’re saving less, it’s that we’re no longer saving at all. The personal saving rate in the United States has been declining for years. In the 1970s and early 1980s, it frequently climbed above ten percent. More recently, it has hovered around zero. But the general trend is downward. Americans are not saving.

The personal saving rate began to drop in the mid-1980s. A 2002 publication [PDF] from the Federal Reserve Board of San Francisco notes three possible causes:

Though the Federal Reserve Board believes consumer credit plays some part in the low saving rate, it isn’t considered a primary factor. I’m not convinced. The total level of consumer credit outstanding has waxed even as the saving rate has waned. I realize that correlation does not imply causation, but I’d love to see more information about how the following graph relates to the first: 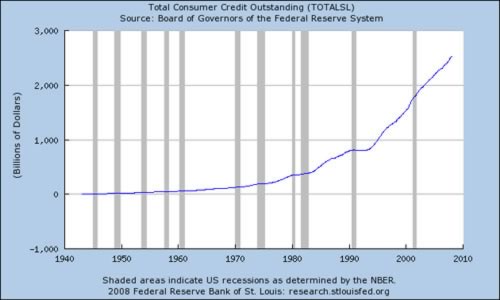 From what I understand, this does not include debt secured by real estate.

What does all this mean? Does it matter to you and me? Is the subprime debacle related to personal saving at all? Could the stock market collapse? Will the credit industry implode? And what happens if the worst comes to pass?

The financial picture seems bleak. Even the most optimistic believe we’re in for a couple years of rough times financially. The pessimistic are whispering we could be heading for an economic collapse to rival the Great Depression. In either case, prudence would indicate that it’s time to buckle down.

For myself, I will continue following the tenets of the “get rich slowly” philosophy. I’m going to stick to the basics. I’ve shed my non-mortgage debt, and I don’t intend to take on any more. I will continue to save. I’ll stick with the frugality that has served me well over the past three years. I will live below my means. If my friends ask my advice, I’ll recommend that they do the same.

Now is not the time for $2,500 plasma televisions. Nor is it yet time to store bread in the closet. But it is time to stop spending and to begin saving. Just like our grandparents did.

Note: Please see the comments for some important clarifications of these economic notions. For example, real-life economist JerichoHill writes: “The Personal Saving Rate is a very poor metric. Most folks save via IRA and 401K. So we should look at that savings rate, which is the National Saving Rate. The NSR shows the same disturbing downward trend, but is the more proper metric to use, in my opinion.”

This doesn’t change my primary point — that a return to frugality and thrift is the best way to cope with financial hard times.