Kris and I had lunch with my cousin Nick today. He wanted to take us to Sushi Kata, a Japanese place in a strip mall not far from our house. But Sushi Kata isn’t open on Sunday, so we scrambled for a replacement. “Let’s go to Ohana,” I said. “I eat there all the time.”

Playing favorites
Because Kris and I eat out fairly often (especially in the winter), we develop favorite restaurants. My favorites are those that are both cheap and good. (These are harder to find than you might think.) Ohana is a Hawaiian joint located in downtown Milwaukie. It’s not super cheap and the food isn’t great, but the prices are fair and the food is consistently good. Does that make sense? In other words, it’s not a bargain, but it is a good deal.

So, about once a week, I walk (or ride or drive) the 2-3/4 miles to Ohana for lunch. The guys there know me now. They don’t give me a menu, and they just wave for me to take any seat I want. They do check to make sure I’m ordering the usual (the Huli Chicken, which is basically just a flattened, salted chicken breast, with greens — two slices of lemon, no dressing — and a cup of rice), and to see what I want to drink (water or diet soda or, rarely, some sort of juice), but then they just leave me alone for an hour or two while I write. I like it.

A few of my favorite meals
Thinking back, Kris and don’t know if we actually had regular restaurants before 2007; we just rotated around instead of picking favorites. But in late 2006 or early 2007, Amy Jo introduced us to Gino’s, a local Italian joint. For a variety of reasons, Kris and I fell in love with the place. It’s not always great — but it usually is. (I say that Gino’s is great 80% of the time and lousy 20% of the time, but those are odds I’m willing to play.) For most of 2007 and much of 2008, Gino’s was our go-to restaurant. We ate at other places, but mostly we ate at Gino’s. (Which was an expensive habit.)

Doesn’t look like much, but Gino’s is usually awesome. (Photo by vj_pdx.)

On 25 March 2008 (my 39th birthday), we tried Pok Pok, which serves “street” Thai food. Instantly, I was hooked. So, for the next year, that became my go-to restaurant. Because it’s open for lunch (and Gino’s isn’t), I conducted many business lunches at Pok Pok, as some of you know from experience. It’s rough to conduct business while eating the messy (but tasty) fish sauce wings, but I make it work. 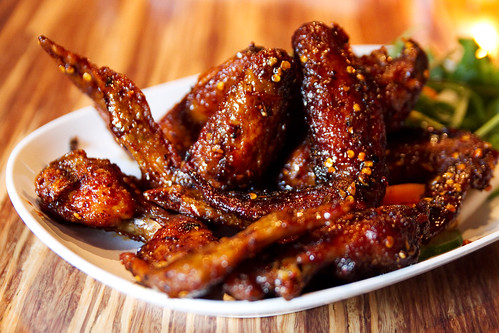 I’m not sure that Kris and I had a favorite spot in 2009. We ate a lot at Gino’s and Pok Pok, but we also enjoyed the local diner, Sully’s, and I ate many lunches at Cha Cha Cha, a Mexican joint in Milwaukie. But nothing stands out as the place we had to eat in 2009.

This year, however, there’s no question that my favorite restaurant has been Screen Door on east Burnside. We actually ate there for the first time in the summer of 2009, but it wasn’t until 2010 that I became obsessed with their fried chicken. Screen Door serves southern food (I’m not sure how authentic it is), and boy is it good! Their boneless, batter-fried chicken is fantastic, especially when served with mashed potatoes and gravy. I’m salivating just thinking about it. 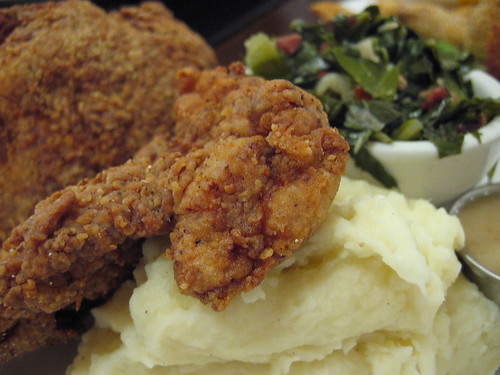 This is my favorite meal of 2010. Delicious beyond words. (Photo by trustella.)

Which restaurant will be our favorite in 2011? There’s no way to tell. We did have a great dinner at the Doug Fir Lounge the other night, though, and we both agreed we should go back there more often. We’ve eaten there a few times before and liked it, but for some reason, it never occurs to us to go back — probably because Screen Door is just a few blocks away.

Keeping score
To summarize, here are my favorite restaurants and dishes from the past few years:

In any event, there’s no question that Kris and I like to dine out. We’re not doing it as much as we used to (probably only once every couple of weeks instead of once a week), but that may be because I’m eating out for lunch about once a week. I’m the one who really likes restaurants, I think.

We look forward to exploring Portland’s vibrant restaurant scene for many years to come!