It’s been an intense couple of weeks around the Roth-Gates household. Kris and I don’t fight often, but we’ve had a couple of rows lately, which should give you some idea of the stress level at Rosings Park.

Why so tense? Well, Your Money: The Missing Manual is finally in bookstores, and the public-relations push as begun. Between the PR, writing my personal-finance blog, and trying to squeeze in Real Life, there just hasn’t been much time for anything resembling a normal life.

Fortunately, the worst is behind us. Last week, I was a guest on 17 radio stations around the country, and I gave a presentation at Powell’s Books. (About 50 people came out to hear me, which was awesome. Thanks, everyone.) There’s still a bit of work ahead of me, but for the first time since last September, there are days at a stretch with nothing scheduled. Woohoo!

So, Kris and I are now much more relaxed. We’re able to spend time together working in the yard — and watching The Amazing Race.

I’m happy, too, because I can start hanging out with friends again. I knew this day would come, so I planned ahead. Though I’ve never done anything like this before, I decided to purchase two season tickets for the Portland Timbers, Portland’s pro soccer team. (The team will move to the MLS, the top U.S. soccer league, next year.) I’m hoping that I can rope one friend per match to join me.

Last Saturday was the first match of the year as the Timbers faced the Rochester Rhinos. (Say what? Are there a lot of Rhinoceroses — Rhinocerii? — in New York?) For this first match, I was joined by Michael Hampton and his nine-year-old son, Ethan. We met early to dine on pastrami and root beer at Kenny and Zuke’s, and then walked about ten blocks to the stadium.

There, I briefly said hello to Rich M., who first took me to a Timbers match back in 2008. (We also used to play soccer together as part of the woeful FC Saints.) Then Michael, Ethan, and I met up with Sinan and Nadir, who had saved seats for us in the midst of the Timbers Army.

Part of the fun of a soccer match (at least in most places around the world) is the fervor of the crowd. The folks who crowd the north end of Portland’s Civic Stadium do an admirable job of recreating this fervor. They chant and cheer and curse and sing. They wave flags and blow horns and set off smoke bombs. It’s a hell of a lot of fun, actually. (Sinan, who is from Croatia, loves Timbers matches.)

This photo from Oregonian photographer Thomas Boyd captures some of the fun: 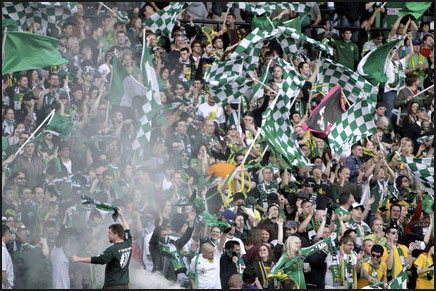 I’m fairly certain this photo was taken in the 85th minute, after the Timbers scored on a penalty kick. Portland won the match 1-0, which was a lucky result. Though neither side played exceptionally well, the Rhinos were the better team, especially in the second half. But during the last ten minutes, Portland mounted a series of attacks, and finally found the back of the net after a Rhino hand ball.

And if you look very carefully, you can actually see me in the midst of these 15,418 fans. I felt very conspicuous in my rust-orange sweater Saturday night (Timbers fans dress in green and white), but it sure makes it easy to spot myself in the upper-right corner of the photo: 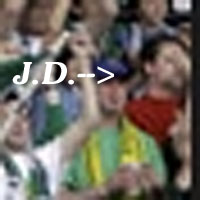 Anyhow, this was a perfect end to a tense week. And now I’m looking forward to a summer of Timbers matches with various friends. If you’d like to join me, drop me a line. I’m booked through the end of May, I think, but open for the games in June, July, and August. The only caveat is that you have to be ready to stand for 90 minutes, and you can’t have any compunctions about singing rowdy songs.