For years, Toto has been the butt of many jokes among my friends. Her insistent meow and often cranky demeanor have prompted many — including Kris — to dismiss her as a bitchy old cat.

While there’s a grain of truth to that, she’s secretly a sweetheart. She’s a needy little thing. She loves to cuddle. Kris is her favorite companion, whether in bed at night or on the couch in front of the television. But she also loves it when I’m sitting in the parlor reading. For over a decade, she’s climbed onto my lap, stood on her hind legs, and done what I call “ear-diving”: she purrs and purrs while burrowing her slobbery nose into my ear. Yuck.

We’ve had people babysit Toto before. Nobody’s ever really bonded with her the way that I have. I’ve always called her my familiar. (That’s to be expected, of course. I’ve known her literally all her life, ever since she was a few hours old.) In fact, nobody’s bonded with her at all. Until now.

While we were in London, Dublin, and New York, our friends Paul and Amy Jo stayed out our house. For the first week of their visit, Toto apparently lived in a cardboard box underneath Kris’ computer desk. This was completely random. But eventually she must have decided that Mom and Dad had left for good, and that these new people were to be here parents. She ventured forth and made herself acquainted with Paul and Amy Jo. Especially with Paul.

Paul decided that she loves when Paul is sitting in the parlor reading. She climbs into his lap, stands on her hind legs, and ear-dives. She thinks he’s pretty darn cool. 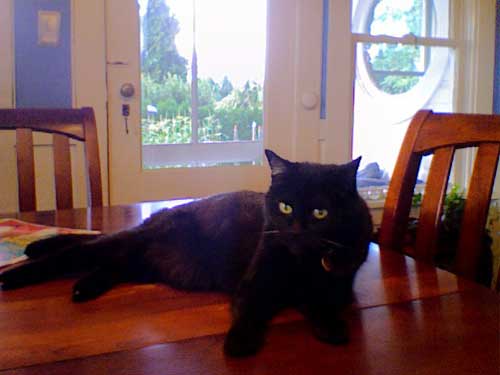 We’ve been back nearly two weeks now, and it’s been interesting to watch Toto’s reaction. She’s almost like a changed cat. While I wouldn’t call her friendly, she’s less cranky than she used to be. Also, she loves to be outside. When she was younger, she always wanted to be outside, but ever since Tintin died, she’s preferred the indoors. Here at Rosings Park, especially, she hasn’t been interested in outside. But now she is. She asks to go out first thing in the morning. She asks to go out before we go to bed. She’s discovered the joys of sitting in the grass, staring at nothing.

It’s funny to watch her interact with me and Paul, too. She loves us both, and often she has to choose. She’ll come hobbling downstairs (she’s old, remember), meowing her gravelly little meow, saunter into the parlor, and stop in her tracks because she has to make a choice: Dad One or Dad Two? Dad One or Dad Two?

It’s kind of fun to have Toto back to something of her old self. I only wonder how long it will last…