I just returned from my annual weekend trip to Oregon’s Opal Creek Wilderness area. Every year, I join five other friends to hike into the forest, pitch our tents on the banks of the creek, and sit around the fire talking about life. We drank a lot of whiskey this year, and spent a lot of time at the swimming hole. 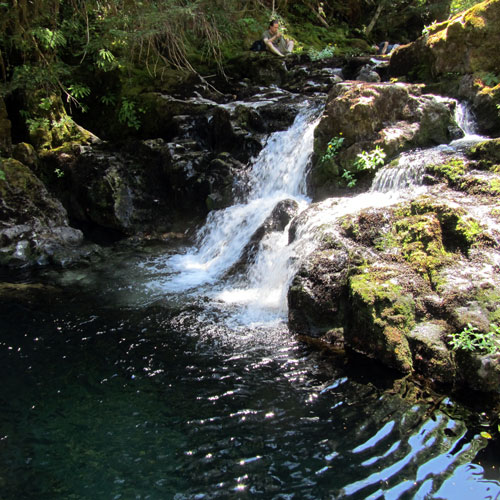 Paul and Tim at rest above the Opal Creek swimming hole

This year, we also talked a lot about where we’re going in life. All six of us are about 40 years old, and we’re all dealing with career transitions of some sort. We chatted about “talkers and doers” (a topic I hope to write about soon), about building social capital, and about retirement. I mentioned that my wife hopes to retire when she’s 52, and that caused a lot of envy. It also prompted an interesting discussion on Sunday afternoon. 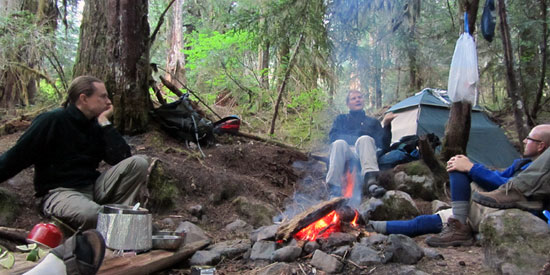 Paul, Tim, and Andrew chatting around the campfire

“How do you define retirement?” Paul asked as he and I climbed into his truck to start the long drive home. “And when do you plan to retire?”

I thought for a moment. “Are those rhetorical questions?” I asked. “Or are you really asking me when I plan to retire?”

“I’m asking you when you plan to retire,” Paul said. “Because in a lot of ways, you already seem retired. You do what you want when you want. You have time to travel and to pursue your hobbies and that sort of thing. Yet when I think of you, I don’t think of you as retired — I think of you as working.”

I had to think about this some more. “I don’t know,” I said at last. “I’m not sure I know what retirement is, and I don’t know when I plan to retire.”

“The thing is,” I said, “none of my family ever retired. Well, that’s not true — my mother’s father retired, but I didn’t know him well. On my dad’s side of the family, the side I really know, nobody retired. Part of that was because so many of them died young. They never got a chance to retire. But I remember that when my grandpa — who worked as a janitor at the high school — when he ‘retired’, he still worked. He didn’t work for money, but he ran a working farm until he was 75 or 80 years old.”

Then I realized I could be clever. If I couldn’t define retirement, if I couldn’t say when I wanted to retire, maybe Paul could. So I asked him. “What does retirement mean to you?” I said.

“Well, to me retirement is not having to do something for money,” Paul said. “If I was working at one thing and wanted to do something else, I could do it and not have to worry.”

Paul nodded. “Sometimes I think that retirement isn’t about the money,” he said. “The thing I wish I had is more time. I spend too much time doing things I don’t want to do for money. I guess I could have time to do the stuff I want, but to do so would require more sacrifices than I’m willing to make. I’m frugal, but I have limits. If I could make money doing something I enjoy, I wouldn’t have to retire. And that’s what it seems like you do.”

“Ahhh…” I said. Now I could see why Paul had asked the original question, why he wanted to know my definition of retirement and when I planned to retire. To him, I was already living the sort of life that he wants when he retires.

Paul continued: “I’ve been talking with Tiffany” — his girlfriend, and my wife’s sister — “and I’ve been wondering: What if I got to a point where yes, I had to work, but I could choose any job I wanted, even if it paid minimum wage? Maybe I could work in a music store.”

“Right,” I said. “I know what you mean. And actually, you’ve sort of hit on something that’s in one of my favorite books. It’s called Work Less, Live More by Bob Clyatt. It’s all about what he calls ‘semi-retirement’. Semi-retirement is like early retirement except that you’d continue to earn money from sort of work. I think it’s much more realistic for most people than a traditional retirement.”

“You know, I’m going to have to write about this conversation,” I said. “And when I do, I’ll add a bit of detail about semi-retirement from the book.”

“With a modest income from part-time work, early semi-retirees may not have to face the dramatic downshifting in spending and lifestyle that so often confronts those who live only on savings or pensions. And semi-retirees learn that a reasonable amount of work, even unpaid work, keeps them energized, contributing, and sharp.”

Though semi-retirement is more realistic than early retirement for most people, it’s still not for the faint of heart. You have to be dedicated and work hard to make it happen. Semi-retirement usually requires ample savings, frugal living, ongoing work, exploration, and a sense of purpose.

“I don’t know when I want to retire,” I said. “But I don’t think of myself as retired now, though I can see why it might look that way. To be honest, I don’t want to retire. I have purpose now, and I like it. For so long, my life had no purpose, and I think that’s why I struggled with depression. Having purpose has changed my life, has giving me a sense of meaning.”

Paul quickly noted my flawed logic. “Wait a minute,” he said. “That pre-supposes that retirement has no purpose.”

“Good point,” I said. “You’re right. And actually, I think it’s very important for everyone to find some sort of purpose, whether they’re retired or not.”

Just then, we reached the Gingerbread House, our pit stop for lunch. We went inside and ordered our burgers and malted milkshakes (Paul ordered double malt), and as the rest of the group arrived our conversation turned from retirement to more mundane things. Plus, we all hunched over our iPhones, catching up on 48 hours of e-mail and text messages.

Later in the day, I thought more about our conversation. The more I think about it, the more it seems that the traditional notion of retirement is something like a mirage. It’s not real. When I think about the people I know who have “retired”, I see that they’ve really just gently transitioned into some other phase of life, usually pursuing something they’re passionate about.

Ultimately, deciding when and how to leave the workforce isn’t about some number in a retirement account. It’s important for each of us to think about our goals and what makes us happy. So, when will I retire? Maybe if I’m lucky, I never will. I’ll just keep doing what I’m doing because it makes me happy and gives me a sense of purpose.