“What next?” The third stage of personal finance

I earned more money in 2008 than I’ve ever made in my life. Get Rich Slowly isn’t just a personal success — it’s a financial success, as well. Combine this income with an ongoing campaign of frugality — my spending last year was the lowest it’s been since I started tracking it — and my financial position is rosy. My plan to get rich slowly is succeeding.

Yet despite my increased wealth, I am not happy. I love what I do — I love writing every day and interacting with readers — but I do too much of it. I spend about 60 hours each week working on this site. I’m neglecting other parts of my life.

I’ve reached a place of financial security. My income is good. I save and invest. I don’t spend frivolously. Now I find myself in the enviable position of having to decide: Should I decrease my workload, or should I use some of my income to invest in the things that make me happy?

Eight years ago, before I started Get Rich Slowly and while I was still deep in debt, I wrote on my personal blog that my goal was “to live a pastoral lifestyle”. What I meant was that I wanted to live simply, with few obligations. I wanted to work from home, to bike on errands, to squash my obsession with Stuff. I wanted to read Dickens and Proust, to spend time with my friends, to enjoy life with Kris.

This is still my ideal.

The entire reason I paid off my debt, increased savings, quit my job, and built a business was so that I could live this pastoral lifestyle. But I’m not living it. In fact, I’m working harder than I ever have before.

I love this job. It’s a joy and a privilege to do what I do. But I wonder: Am I burning myself out? Am I sacrificing time for money? Maybe there’s some middle ground. Or maybe it’s time to move to a new stage of personal finance.

The Stages of Money 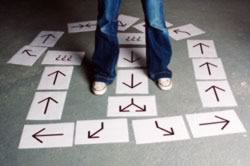 Last month, I had an interesting conversation with three GRS readers: John, Tyler, and Victoria. Via comments and e-mail, we discussed an important question: “What next?” Each of us, in our own way, has mastered the basics of money management. We’re ready to move from personal-finance goals to the next step. Tyler suggested that we’re at the “third stage” of financial maturity.

The four of us exchanged e-mail about what this third stage looks like, what it means to us. For example, Victoria wrote:

I, too, am beyond the first stages of personal finance. I’m focusing on self-education in entrepreneurship and philanthropy this year. I believe that every individual should have a progressive plan for when they move beyond debt, have maxed out their retirement plans, have all they need and have prioritized wants. “What next?” is a question that should be planned for.

John noted that once the basics become habit, there’s a change in mindset that needs to occur. Just as we had to shift our thinking in order to reduce our debt and to establish the habit of saving, so too must we learn that there are different types of spending:

What we’re doing now is investing. Maybe I’m investing in myself, maybe in other people, or maybe in causes or ideas that I want to help grow, but it is an investment. I am taking value that I have worked hard to build and develop and I am investing it in someone or something else. It’s not wasteful spending — I am expecting a return, not necessarily monetary, but for something positive to come out of it. Spending is more of a gut reaction. You buy something to feel better or to make up for something you are lacking. When you are investing, it is a conscious act done with a purpose. There is thought behind it.

Most of the financial information on the internet — and in magazines and books — is directed toward those in the first two stages. There’s a reason for this. The fundamentals are essential. But there’s more to smart personal finance than just practicing the basics. Where’s the information for those who are ready for the third stage? Are subsequent steps entirely self-directed? Is this where a financial planner comes in? And how many stages are there?

Victoria and Tyler and John wrote a lot more; I wish I had room to share it all. (I’ll be publishing a guest-post from John on this subject during the next month.) Suffice it to say that our conversation — and recent events — have forced me to think about what money actually means to me.

The death of my friend Sparky caused a seismic shift in my value system. I’m seeing fault lines I never knew existed. I still believe in the importance of smart personal finance, and I’m as passionate as ever about getting rich slowly. But I’m ready to explore new aspects of this philosophy.

Over the next few months, I hope to begin learning — and sharing — about other stages of personal finance. I’m going to start adding new flavors to the mix. I’m still going to write mostly about the fundamentals — debt reduction and frugality are important — but I want to write more about the Big Picture. I’ll spend time exploring the nature of social capital. I’ll try to discover the answer to the question “What next? What’s the next step after you’ve built a solid foundation?” I’m going to write about those times it makes sense to spend — or to invest — for things that make you happy.

Last summer, one GRS reader submitted a guest article about how his friend had bought a new boat. This friend had wanted the boat for a long time, and he could afford it. He knew it would make him happy. So he bought it.

I didn’t publish the story. I was worried that it would send the wrong message. I believed it might encourage reckless spending. In retrospect, I was wrong.

I’m not going to publish the boat story yet — I’ll save it until after Memorial Day so that it makes sense — but I’m going to publish stories like it. I see now that money is not the goal. The goal is to live a life in which we can do and have the things we want — by making conscious choices. Money is a tool for reaching that goal.

I’m going to have fun learning about the third stage of personal finance — and beyond. As always, I hope you’ll join me on the journey.