On 19 April 2007, I wrote a short post about compact fluorescent light bulbs for Get Rich Slowly. It was a throwaway post, really — just a quick update. To illustrate it, I googled for a photo of a CFL in action. Most of them sucked, but I found one that didn’t:

I downloaded the photo, added it to my article, and went about my business. A few hours later, I received this e-mail in my inbox (I’ve added HTML to make things more readable):

My name is David Hobby, and I run Strobist.com. I see that you and I have similar Technorati rankings, so I would assume you know that it is not nice to just grab someone’s photo without permission, wherever it came from. *Especially* if you do not even credit and link to them.

I spent a lot of time and thought making that photo. And to my knowledge there is not another one like it in the world. Normally, photographer tend to pretty much go apeshit and point both barrels at an infringer in a situation like this. But I do understand that you probably have a lot of things in the air at one time and I want to give you the benefit of the doubt when going forward.

Rather than go into the Default Legal Mode like I do when a big company does this kind of thing (I had a very nice, 6-week European vacation on a publisher who did this once) I would rather treat this as a minor oops and give you a range of choices for you to decide how you want to go forward.

For a few moments, I felt like the world was crashing around me. I knew I had done something wrong. I’d been “borrowing” photos via Google for years, even though I knew it wasn’t strictly kosher. I’d always thought of it as a venial sin, though, one that would never cause me woe.

In his e-mail, Hobby outlined four possible resolutions to the problem. In each option, he won something. But what I got out of each choice was vastly different. In one case, I lost a lot. At the other extreme, I actually gained something. In other words, he was offering me a variety of scenarios, some of which were WIN-LOSE, and at least one of which was WIN-WIN. I chose the WIN-WIN.

To compensate Hobby, I wrote an article about the blurring line between amateur and professional photographers, in which I included plenty of links to his site. I got to use Hobby’s photo, and he received some “linkjuice” and exposure for Strobist.

But then a curious thing happened. Hobby and I became friends. We began to pick each other’s brains. We asked each other blogging questions. We spoke by phone, and he explained that Strobist was making enough money to support him. Get Rich Slowly wasn’t quite to that point yet for me, so I found this fascinating.

Then, for one of the “assignments” on his site, Hobby created a photo with Get Rich Slowly in mind: 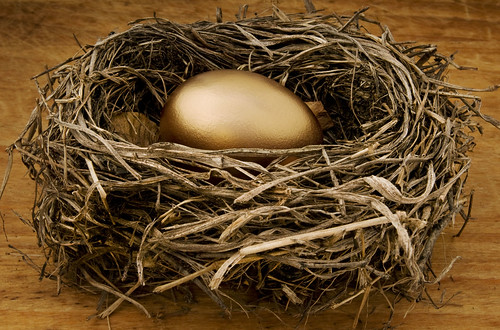 Earlier this year, Hobby decided to sell his home in Baltimore. As part of his marketing effort, he created a blog. I thought this was a cool idea, but it also gave me a chance to help a friend. I wrote about the idea at Get Rich Slowly.

Basically, what started as a confrontation because I had done something very stupid turned into a mutually beneficial relationship. Why? Because Hobby encouraged me to pursue the course of WIN-WIN.

The Big Book of Everything

Not every conflict is resolved so amicably. Sometimes one (or both) of the parties is unable to take the long view, or perhaps feels so aggrieved that they’re not willing to pursue a WIN-WIN option. Here I have another example from the world of Get Rich Slowly.

Authors and publishers send me books all of the time. I get several per month (and sometimes several per week). I can’t hope to review them all, but I do my best. 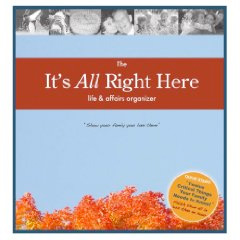 Last year, Mark Gavagan sent me a copy of his It’s All Right Here life and affairs organizer, a three-ring binder designed to help people organize their important information.

I was intrigued by It’s All Right Here, but I felt like it had some weaknesses (it was big and unwieldy, almost too comprehensive). Also, at $50, it seemed expensive. Instead of doing a full review, I mentioned it at GRS whenever it seemed appropriate.

I mentioned It’s All Right Here in February, for example, when answering a reader question about how to organize account information. That same question prompted a GRS reader named Erik Dewey to organize his own information. He created a personal spreadsheet to act as his own life affairs organizer. In May, Dewey sent me e-mail:

I read your post about preparing your information for disaster. I did the same thing a while back and made what I called the Big Book of Everything. I PDF’d it so I could print out new pages when I needed to. Anyway, I thought you might like to take a look at it. Enjoy, let me know if you see anything I missed.

I thought Dewey’s project was great, so I wrote back and asked permission to share it with the Get Rich Slowly community. He gave his okay. Last week, after two months of sitting on the idea, I finally posted about Dewey’s free life-affairs organizer.

People loved it. It was obviously unpolished, but it gave folks a framework with which to assemble their information. Lifehacker picked up the story, and Dewey’s project made the rounds of the web. Everyone was happy.

Mark Gavagan, the creator of the It’s All Right Here life and affairs organizer was decidedly unhappy. He wrote to me expressing his concerns that Dewey had “stolen” from him when creating the free Big Book of Everything

This was a sticky situation. I had communicated with both Gavagan and Dewey, and they both seemed like nice guys. Having read both books, I didn’t think Dewey had plagiarized from Gavagan. His e-book had similarities to Gavagan’s book, but that was only natural. All life affairs organizers have similarities, just as all books about debt reduction have similarities.

I didn’t want to be caught in the middle of this dispute, so I suggested that Gavagan contact Dewey in order to work things out. Both sides agree that conversation was friendly enough, but the end result was the opposite of the WIN-WIN scenario Hobby and I arrived at a couple of years ago. This time the result was LOSE-LOSE.

Dewey took down the PDF and Excel versions of his Big Book of Everything and posted the following statement:

I received a call from Mark Gavagan who wrote the It’s All In Here information organizer. He had concerns about where I got the information for what I put in the Big Book of Everything.

Let me state that I do not own, nor have I read, or even handled his book. I could not find anything that met all of my needs in an information organizer, so I decided to make my own. I gathered the list of what forms to include from a variety of sources, including my father’s will.

Still, I am sympathetic to his concerns. He is a small publisher and something like the Big Book could have a noticable impact on him. Call it the law of unintended consequences.

My goal in posting the Big Book was just to share something I had created, similar to some of the gaming spreadsheets and quick reference cards I’ve posted on this site. I had no intention of harming someone else in the process, but that is what happened.

So, I’ve decided to take down the Big Book and I apologize if you came here specifically to find it.

Again, let me re-iterate: I think that Gavagan and Dewey are both nice guys. I don’t think either one is trying to be a jerk. But in a LOSE-LOSE scenario, that doesn’t always matter.

GRS readers were upset at how things played out. Here’s a typical response from a reader named SHS:

What a shame that Erik felt compelled to take down his very useful creation! I definitely will NOT be buying It’s All Right Here — or anything else from that author and his publisher. If anyone has this file in Excel format — or editable PDF format — please let me know via a follow-up comment.

Essentially, everyone in this scenario loses:

In fact, I’m the only one who wins because I get to write this article about how not to handle conflict resolution.

How would I have handled the situation? First, let’s make it clear that this is no Kobayashi Maru.

In fact, there were a number of WIN-WIN scenarios available to Gavagan and Dewey. As a (mostly) impartial third-party observer, I think that one of the scenarios is far superior to all others. If I had the power to shape things to what I consider an ideal outcome, here’s what would happen:

I think Dewey’s message should be: “I’ve created this free organizer. It’s pretty useful. But if you want something more comprehensive, check out these products from Mark Gavagan.” And I actually think Gavagan could profit by bringing Dewey on to consult with him, to create digital versions of his products for people to download.

To me, that’s a WIN-WIN scenario.

The older I get, the more I realize that much of what I do and choose is predicated on the avoidance of conflict. I’m still a competitive guy — deep inside, I still long for those days that Kris and I played games with Mac and Pam a couple of nights per week — but there’s a difference between competition and conflict.

To me, conflict is non-productive. It produces losers. It lessens everyone involved in some way. This is one reason that I so loathe the American political process and the petty conflicts it produces. This is why I smack down negative elements at Get Rich Slowly. And it’s also why I think shows like Battlestar Galactica are far less than they could be. (Battlestar‘s modus operandi seems to be “conflict for conflict’s sake”.)

I’m disappointed that Gavagan and Dewey arrived at a LOSE-LOSE solution. I think outcomes like this subtract something from the universe. (Boy, that sounds all mystical, doesn’t it? I don’t mean it that way.) I’m a firm believer in the notion of social capital. I’ve come to understand that WIN-WIN solutions build social capital, and lots of it. But the LOSE-LOSE option weakens everyone.