The Year of Opportunity

Earlier this week, I wrote about the importance of tackling one thing at a time. When you have a long list of goals, it can be tempting to work on all of your objectives at once. This scattershot approach, however, tends be counterproductive. Over the past decade, I’ve learned that I can be much more productive — and happier! — when I exercise the power of focus, prioritizing one goal over all others.

One way this manifests itself in my life is through themed years or months. One month, I might make it a goal to get to the gym every day. Another, my aim might be to never eat alone, to have lunch with a friend or reader whenever possible. And sometimes, I stay focused on a particular goal for an entire year.

Starting next week, I’m going to take “theming” to a micro-level. Using the ideas of Mike Vardy (the Productivityist), I’m going to try using themed days to stay on task. Each week, I’ll have “administrative Monday”, “typing Tuesday”, “thoughtful Thursday”, and so on. I’m not certain getting this granular with theming will be useful for me, but I’m going to try it for a few months.

As a firm believer in being proactive, I’ve always chosen the themes for my years and months. That is, I decide what I’m going to do, and then I do it. I don’t let life decide what my weeks and months are about. At least, that’s been my approach until this year.

This year has been strange. This year, life has handed me opportunity after opportunity. I started January with a direction in mind, but I’ve had to make numerous course corrections as new circumstances arise. So far, 2017 has been the Year of Opportunity. It’s both exciting and scary.

Let me give you some examples.

Several years ago, I came up with an idea to open a store that sells financial advice. I never pursued the idea because it isn’t a good fit for my skillset. (Plus, I’m kind of a chicken.)

Soon after that, however, I met Shannon McLay who runs the Martinis and Your Money podcast. Shannon has worked in the financial services industry for seventeen years. She’s whip-smart. She told me about her idea to open a store that sells financial advice. Last year, after three years of preparation, Shannon opened the Financial Gym in New York City. I attended the grand opening. 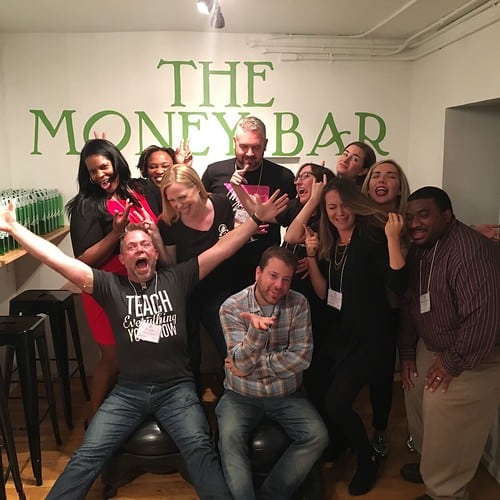 Later that evening, Shannon and I had dinner at a little Italian place on Madison Avenue. “I love what you’re doing,” I told her over pasta and wine. “I love your mission. If you’re ever looking for investors, let me know.

In January, Shannon dropped me a line. She let me know that she was looking for investors. “We really want to grow the business,” she said. “Whatever you can contribute will help us hire new staff and spread the word about the Financial Gym.”

In early February, I had lunch with my long-time friend Michael. Michael is a career counselor at a small college. But he’s also worked with me behind the scenes for years. He used to answer email at Get Rich Slowly as Winston. Nowadays, he performs email triage at Money Boss and pursues the wild ideas that come into my head. (“Hey, Michael. What would it take to print up the Money Boss Manifesto as if it were some sort of cheap religious tract?” “I don’t know, J.D., but I can find out.”)

While we were catching up on our lives, Michael mentioned that he and his wife were trying to find a way to buy a condo on the Oregon coast. “It’s a small place on the south end of Lincoln City,” he told me. “It’s pretty unremarkable except that it already has an established VRBO business and it seems reasonably priced. I think we could get it for $130,000.”

“What’s holding you back?” I asked.

“Well, for one thing, my life is a little wary,” he said. “Plus, although it sounds like a fun project, it’s not 100% aligned with our financial goals. We have to put the kids through college!”

“What if you had a partner?” I asked. “What if Kim and I took half the financial burden?”

For the next few weeks, Michael and I explored the idea. He got the rental financials from the current owner. Kim and I took a one-night mid-week vacation to Lincoln City in order to scout out the condo. We came back willing to make the investment. But again, the same problem came up: I don’t have a lot of available cash.

While it’s true that I have over $1,000,000 invested in mutual funds, and it’s also true that I can access that money if I need to, I’m reluctant to touch it. Roughly one-third of that money is in retirement accounts and can’t be accessed without penalty. And when I access the regular investment accounts, I open myself up to a long-term capital gains tax hit, so I prefer not to use that money, if possible.

On the same day that I wired $50,000 to invest in Shannon’s Financial Gym, I went into my credit union to apply for a home equity line of credit. (“I always advise my clients to open a HELOC, if they can get one,” Shannon had told me earlier that week. “You never know when you might need it.”) Because I don’t have a traditional job, the bank was reluctant to loan me money. Eventually, though, I convinced them to grant me a $130,000 HELOC.

Yesterday, Michael and I chatted by phone. “I’ve got some bad news,” he told me. “My wife likes the idea of the condo at the beach, but she’s just not willing to make the leap. I’m sorry.”

“No worries,” I said. “I got the HELOC for the full $130,000 in case we needed it. Let me chat with Kim to see whether this is something she wants pursue just the two of us.”

We’re still having that discussion.

Crunching the numbers for the Financial Gym and the beach condo consumed a lot of my free time over the past two months. But those aren’t the only opportunities that have come my way!

Kim’s brother was in town recently with his family. He and his wife own a hotel near a popular tourist destination in central California. They want to purchase another hotel in the region. “How would you two like to contribute $200,000 cash to become joint owners?” they asked us. Because this offer took us by surprise, we didn’t know what to say.

“The way we see it,” Kim’s brother said, “you’d move to our town, and run the new hotel in partnership with us. Kim could be the event co-ordinator. J.D. could do marketing and promotion. We could split duties: We’d be off for three months, then you guys would be off for three months. Plus, this way you’d be closer to our family!”

Kim and I spent the next several days talking about this opportunity. Do we really want to leave Portland for California? Do we really want to own a hotel? Kim has worked hard to land dental hygiene gigs that she loves here in Portland, and she knows nothing about event planning. How would that be for her? Where would I find time to write about money?

In the end, we didn’t make a decision. Kim’s brother and his wife are pursuing the purchase with other financing options. Meanwhile, we’re still toying with the idea. I’m sure that they’d continue the conversation if we came back and said, “Hell yeah! We’re in!” But that’s not where we’re at.

The talk about the hotel did spark something inside Kim, though. “You know,” she told me last week, “you and I both want to live in the country. Our home here in Portland is great, and I love my jobs, and I love this neighborhood, but my heart wants out of the city.”

“Are you serious?” I asked.

So, for the past few days we’ve been looking at houses on Zillow. Unfortunately, pickings are slim for our parameters. (We don’t want a large home, but we do want some land.) I suspect we’ll be roaming the Willamette Valley over the next few weeks, looking for potential properties. Who knows? Maybe we’ll buy mom’s house and move out next to the family box factory!

Then, as if all of this isn’t enough, I had a phone call yesterday that I can’t discuss in detail. What I can say is that an unexpected — but amazing — opportunity may have fallen into my lap. I’ll have a second call about this situation in a week or two, and I’m curious to see what happens.

The bottom line: There could be all sorts of big changes to my life during the next few months.

Steering My Own Life

As I said at the start, I generally try to maintain a strong internal locus of control. I’m proactive. I steer my own life. But this year, I feel as if the universe has been trying to push and pull me in different directions. Never before have I had so many big opportunities come in such a short period of time.

Honestly, I’ve been a little overwhelmed by some of these decisions.

The key, of course, is to remember that I am in control. I call the shots. I am the money boss. Just because an opportunity arises, that doesn’t mean I have to take it. It’s important to evaluate each situation to determine whether or not it fits my larger goals and purpose.

Investing in the Financial Gym was a no-brainer. Shannon’s business is completely aligned with my own mission and values. Investing in a hotel? Probably not.

To help make sense of some of these opportunities — and to better understand my financial situation — I’ve decided to tap into an expert resource. I just invested in Shannon’s Financial Gym, right? What better way to learn about what she does than to have her work with me and Kim to parse our financial present — and future! As soon as the three of us can arrange it, we’ll get together via Skype to talk about money and opportunity.