Howdy. My name is J.D. Roth. I’m a money writer from Portland, Oregon.

I founded Get Rich Slowly, wrote Your Money: The Missing Manual, created the year-long “Get Rich Slowly” course, and contributed the monthly “Your Money” column to Entrepreneur magazine.

Folded Space is about more than money. It’s a personal playground where I share big thoughts and small details from my daily life.

I was born and raised in Canby, Oregon. As was my father before me. As was his father before him. I attended Canby Union High School before spending four years at college in Salem, where I attended Willamette University. I earned a bachelor of arts in psychology with a minor in English (writing emphasis). I also took a lot of public speaking classes.

At Willamette, I met the remarkable Kris Gates. We were married soon after graduation. Against all odds, Kris got a job teaching chemistry and physics at Canby High School, so we moved back to my hometown and I went to work for the family business, Custom Box Service. We lived in Canby for over a decade, raising our cats, tending our garden, reading our books. Then we stumbled upon our hundred-year-old dream house in Oak Grove, so we packed up and moved closer to Portland.

After starting Get Rich Slowly in 2006, the site grew quickly from a hobby to a business. Soon I had repaid over $35,000 in consumer debt and quit my day job to write full time. I wrote a book. I contributed a column to Entrepreneur magazine. I spoke at conferences.

Kris and I divorced in 2011 but remain on good terms. I help her with computers, and she gives me canned goods. We see each other regularly. Since 2012, I’ve been dating the delightful Kim Edwards. Her warmth and enthusiasm bring sunshine to even the darkest days.

I love to learn. I love to travel. I love to meet new people and hear their stories.

I read a lot. I write a lot. I surf the web a lot. I dabble in photography. I enjoy playing games. I like to watch soccer. Though I claim friends aren’t important, I have many with whom I enjoy spending time.

I believe everybody is important and has something interesting to say. I believe that when we share our stories with other, we make the world a better place.

I also believe — strongly — that although we all should be working to make our world a better, more equitable place, the only one who can actually change your life is you. No matter what your circumstances, you have the greatest control over your destiny.

Were you the host of television’s Fun House? The voice of Johnny Quest? The producer of The Biggest Loser?

No. That’s a different J.D. Roth. In 2016, I (at long last) has an opportunity to interview the other J.D. Roth. Although it sounds silly, this was a dream come true haha.

This weblog is a forum for my thoughts and interests, and an opportunity to share my daily life with friends and family. To the extent a weblog can represent a person, mine represents who I am. Sometimes I swear. Sometimes I rant against religion, etiquette, and assorted bozos. If these things offend you, I apologize: there are other sites that might be of greater interest to you.

Though I try not to write about politics, sometimes I can’t help it. I’m a small-I independent (though some feel I’m a small-L libertarian). I hate the two-party system. For a time, I was mildly active in local politics, but that died a slow death when I found I could affect little change. (Though I did fight for funding for the historical society!)

Disclaimer: Everything here is True, but not everything here is true. Sometimes — not often — I will alter a fact, will compress time, will composite characters. I will, in short, alter the little truths in order that a larger Truth might be more visible. This isn’t a common occurrence, but it does happen. Here is an extended discussion on truth vs. fact in weblogs (in particular, how it affects Foldedspace.)

I’ve been reading and writing about money for nearly a decade. I’ve been reading and writing about happiness for nearly as long. The subjects are deeply intertwined. Based on my research and experience, I’ve developed not only a philosophy of well-being, but a short summary of the research into how to be happy. This hundred-word piece is a sort of personal roadmap; whenever I sense I’m drifting off course, I re-read it, and I find my way again.

My friend Lisa is a graphic designer. Recently, for kicks, she and I collaborated to create a print based on my summary of how to be happy. It looks like this: 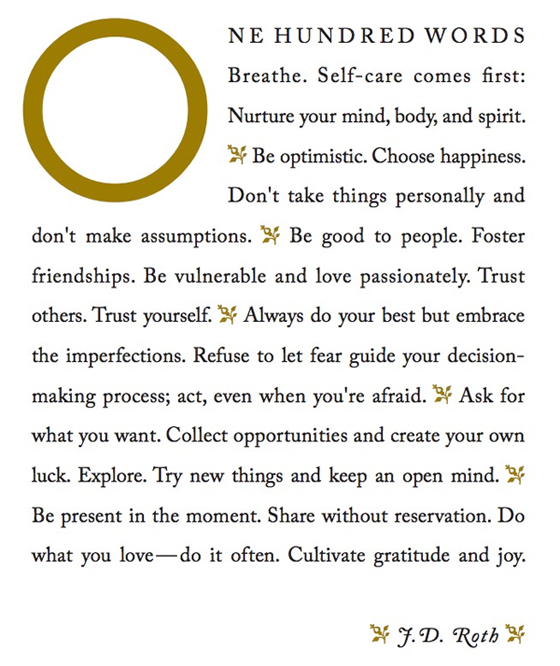 That’s dozens of books about meaning and happiness compressed into one hundred words. Notice that none of this advice involves waiting for someone or something to make you happy. All of it requires intentional activity on your part to increase your well-being. Happiness isn’t something that just happens; happiness is a byproduct of the the things you think and say and do.

New to Foldedspace? Start here. Old? Check out the archives.