Kris and I spent the weekend in Lincoln City with Michael and Laura and their two children, Ethan and Sophia. We had a fine relaxing time, including good conversation — and a round of miniature golf.

One strange thing we noted: Up the beach from the rental house were several large pieces of driftwood. Driftlogs, if you will. And one of them was burning. There were no flames jutting up from the thing, but it was smoldering with hot embers. This was an enormous log — 20-30 feet long and maybe 8 feet in diameter (though there was a U-shaped gouge down its length) — and it was hot and smoking at both ends. What gives?

Over the course of the weekend, I was able to ply my trade: indoctrination of children. Here we see Ethan and Sophia falling under the sway of a bad, bad man: 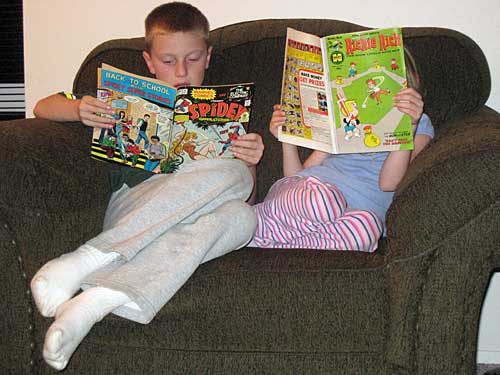 Maybe next time I can introduce them to Advanced Comics. Heh.

Speaking of comics indoctrination, Lisa e-mailed me last week and actually asked me to help her indoctrinate Albert. Like I’m going to refuse that? Albert doesn’t know it, but he has some Tintin in his future. And some Little Lulu. And some Disney ducks from Carl Barks.

While we were at Lincoln City, I checked out a couple of bookstores. The first is actually about 20 miles from the coast, almost at the casino. I don’t know what it’s called, but I remember that longer ago — ten years? twenty? — it was a decent bookstore with a fine collection of comic books. It’s not longer a decent bookstore (if it ever was), but it does have some comics.

Unfortunately, they’re all kept in a glass display case. The woman who helped me seemed intent on showing them to me one at a time. Since there were a couple of hundred, I gave up rather quickly. There were some comics I wanted, but they were priced way too high (four times what they ought to have been), and I wasn’t about to spend all day with an old woman piecing them out to me.

Another used bookstore — near the outlet mall — was only rather average. It did have copious collections of railroad and radio books, though. Strange subjects for specialization, but there you go.

But there was one bookstore that took my breath away. It’s amazing. Robert’s Bookshop is located south of the downtown area near the theater multiplex. (Kris says it’s across from the Christmas store.) It doesn’t look like much from outside, but inside it’s a labyrinth of old books. There are paperbacks and hardbacks. There are comics and magazines. There are science fiction books and personal finance books and children’s books and cookbooks.

It’s been a l-o-n-g time since I let loose in a bookstore, but I let loose in Robert’s Bookshop. And I don’t regret it. This store is sort of like what Powell’s used to be back when the latter was a decent bookstore. (Powell’s is a hollow shell of its former self nowadays.)

Our trip to Lincoln City was about more than books and comics, though. I do have some video recorded. If I can find time to edit it, I’ll post a bit to YouTube.