The new Battlestar Galactica series airs on the SciFi Channel this week.

You should watch this show.

If you’re interested in science fiction — even just a little — you should watch this show.

If you’re tired of the direction the Star Trek and Star Wars franchises have taken, you should watch this show.

If you liked the old Battlestar Galactica, you should watch this show.

Basically, if you think there’s even a remote possibility that you might like the new Battlestar Galactica, and you have access to the SciFi Channel, you should give the show a try. 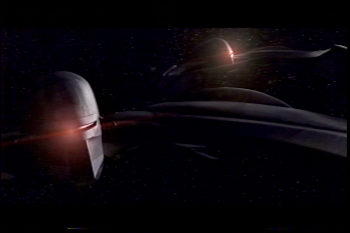 This new Battlestar Galactica debuted last winter as a four-hour miniseries. I didn’t watch it. It received mediocre reviews, and despite Nicole‘s endorsement, I didn’t take the time to check it out. I regret that.

Since the actual series began airing in the UK in October, I’ve been grabbing each weekly installment via BitTorrent. The eleventh episode was broadcast Monday, and I’m downloading it this very moment.

At first I was disconcerted because this isn’t so much a remake of the original series as a “re-imagining”. The creators have taken the premise of the earlier show (which aired twenty-four episodes from 1978-1979), the character names and traits, even many of the situations, and then re-adapted them to suit their purposes. But they’ve done a fantastic job. 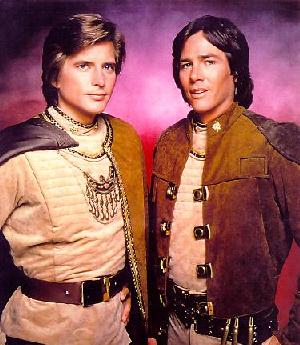 The old Starbuck and Apollo…

The cylons were created by man. They rebelled. They evolved. They look and feel human. Some are programmed to think they are human. There are many copies. And they have a plan.

The cylons, machines created to do humanity’s dirty work, rebel. After many years of war, they propose peace. But they’ve secretly planted cylon agents, agents that appear human rather than mechanical, throughout the twelve colonized worlds. They cylons launch a surprise attack, nearly destroying civilization. All that remains is a “rag-tag fleet” of ships, fleeing from the cylons, searching for a new world to call home.

I love the homages the new series pays to the old. Two original episodes have been adapted to the new series, but it’s more than that. In one episode, Richard Hatch, the original Apollo, appears as the leader of a prison riot. His scenes with the new Apollo gain additional subtext when you understand that Hatch championed the cause of a new Galactica for years, only to see his version ignored in favor of the one we have now. 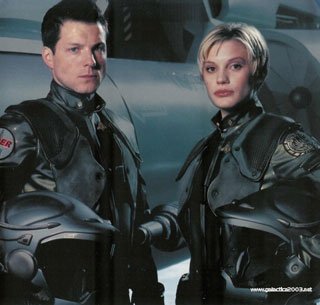 …meet the new Apollo and Starbuck

The Colonial Vipers — the X-Wings of Battlestar — are still here. Starbuck still swears and smokes cigars and loves to gamble, but is now a woman. Boomer’s a woman, too. Adama (still a man) is played, most excellently, by Edward James Olmos.

The biggest change from the original is that now most of the cylons take human form. (The most prominent cylon, a beautiful seductress referred to simply as Number Six, seems to exist almost entirely in the mind of the traitor, Baltar.) The old, robot-like cylons are still around, but they play a minor role.

There’s lots to praise here. The music is subtle and atmospheric, almost haunting, not bombastic in the sci-fi movie tradition. Spacecraft obey the laws of physics. The (rare) space battles are quite different from those we’re used to seeing. Best of all, this is a show for adults; there are no annoying children to detract from the main plot threads.

And, really, that’s what we have here: a series of continuing plot threads, weaving their way through the course of a thirteen episode season. The series’ tone reminds me very much of Lost, another new show from this season.

Battlestar Galactica is not without weaknesses. The acting tends toward wooden at times, especially from the supporting player. Everyone is too earnest by half. Certain plot points are belabored beyond my ability to care (though, to be honest, the plot element I liked the least — the cylon in Baltar’s mind — paid off in a big way in a recent episode). And, if anything, I long for more robots and spacefights. The show’s creators use these elements sparingly, and perhaps that’s why they carry such weight when they actually do appear. (Sometimes this show feels like The West Wing in space.)

You should watch this show.

I loved Battlestar Galactica when I was a kid, and was devastated when they took it off the air. I love this entry – in only reinforced my decision to watch the series.

When does it start for us almost geeks that wait for normal TV? I don’t want to miss it!

Hm. What a horrible oversight. It would be helpful to post the schedule, wouldn’t it. It appears that the show’s normal air-time will be Friday at 7 p.m. and 10 p.m. Pacific.

Part one of the miniseries from last year will broadcast tonight from 6-8 and again tomorrow from 4-6. The second part will broadcast tomorrow from 6-8. (Which means that for the first time since my knee surgery I’ll be glued to the telly for six hours straight: four hours of Battlestar, then Lost, then Alias.)

The first episode of the new series airs this Friday at 6 p.m., followed by the second episode at 7 p.m. Next week the series settles into its regular time at 7 p.m. and 10 p.m. on Fridays.

That’s two votes for the “Kris was wrong” party. The mini series was awesome so I’m really looking forward to the series, especially after your review J.D.

BTW, the schedule for Canadian viewers is Saturday Jan. 15th at 8pm EST and repeats on Sunday Jan. 16th at 6pm EST on Space.

I’ve posted the trailer for the new Battlestar Galactica series here. It’s a 5mb Quicktime clip. (Left-click to watch in a browser window or right-click to save to your hard drive.)

One vote for the “Kris definitely knew what she was talking about” camp.

Strangely, I don’t get SciFi in my city on cable. Yesyes, I could get satellite or something, but I don’t watch enough TV to care.

Not sure whether I’d watch the series if I did get SciFi. I enjoyed the original series as a kid – but then, I was 9. As an adult, the few episodes I’ve seen have been just plain awful. And it never interested me as much as Star Trek.

I probably would not have watched if you had not mentioned it, but I did watch last night and will probably watch the rest just to see where it is going. I never could get into Battlestar before. I grew up on Star Trek and saw the first Star Wars on the first day at one of the few theaters showing it. The theater is now gone, but I still have my “May the Force Be with You” pin that they handed out to the diehards. We were actually first in line!

I’m sooooo with Kris on this!

JD–Sorry I didn’t respond sooner. My school computer isn’t allowing me to respond. I’m totally with you (must be a y-chromosome thing). I loved the original as a kid. Not geeky, or I guess it is not geeky if it is something that you like.

JD–Sorry I didn’t respond sooner. My school computer isn’t allowing me to respond. I’m totally with you (must be a y-chromosome thing). I loved the original as a kid. Not geeky, or I guess it is not geeky if it is something that you like.

I really liked the miniseries, and if anything the first two episodes were better. I find the “Earthisms” kind of jarring, but that’s pretty minor. This is the show that Enterprise has been trying (and failing) to be.

Is the new season of battlestar galactica going to be on any other popular stations (nbc etc), besides the Scifi? In canada we don’t get that station (bummer) eh:-((((
Stargate (both series) are hard to get as well.