Kris’ Aunt Jenefer and Uncle Bob are in town for the weekend, spending time in beautiful metropolitan Canby. We’ve eaten a lot, and shared a lot of family history. Tomorrow we’ll drive up to the Columbia Gorge to visit Bob’s mother.

Today we spent the afternoon in Aurora, shopping for antiques. In the large store, our favorite, there was a white baby grand piano for sale for $2500. At one point, a young woman (in a pink knit cap) sat at the piano and rolled off five minutes of beautiful classical music. The sound was rich and warm, and it moved me. I sat on a bench and watched the snow fall outside (our third snowfall of the season!), listening to the piano.

Kris walked to where I was sitting. “Do you like this music?” she asked, and I nodded. “I’d like it if you learned to play the piano,” she said. “Then I could sing while you played.”

I’ve always wanted to play the piano. I’ve admired my friends — Kristin, Kim, etc.) — that know how. During my freshman year of college, I took piano lessons for a semester. They went well, but I had trouble because just before the semester started, I broke the ring finger on my right hand while playing touch football at Kim’s house.

(I didn’t know the finger was broken for several days. I was making boxes, and it hurt to flip the sheets of corrugated while we slotted the boxes, so I went to the doctor. I had a fracture. It’s the only broken bone I’ve ever had.)

Despite my broken finger, I persevered and finished the class, but I never took further lessons. I regret that. I love music, but I cannot sing, so I ought to play an instrument.

Maybe someday I’ll take lessons again. I wonder how well adults learn to play. I wonder where I’d find someone to teach me…

In one of the antique shops, I idly picked up a photograph of a dour looking couple. I flipped it over and saw that the photograph was of Sam and Hannah Nofziger. I furrowed my brow and frowned, then put the photo back. Sam and Hannah Kauffman. Why were those names familiar?

When we got home from shopping, I checked my genealogical program; sure enough: Hannah Roth was my grandfather’s aunt (my great-great aunt?). I rushed back to the antique store and bought the photograph. 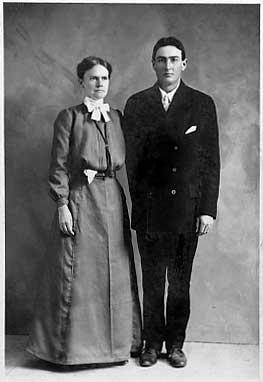 This couple is actually key to our family history, especially to my brother Jeff’s family history. Hannah, as I mentioned, was our great-great aunt. Jeff is married to Stephanie Nofziger. The Samuel Nofziger in this photo was the brother of Stephanie’s great grandfather. In other words, he bears the same relationship to Stephanie as Hannah does to Jeff. This couple tied the two families together; three generations later, Jeff and Steph tied it together again. Fun stuff!

Jeff recently brought me this photograph, given to him by a woman at church: 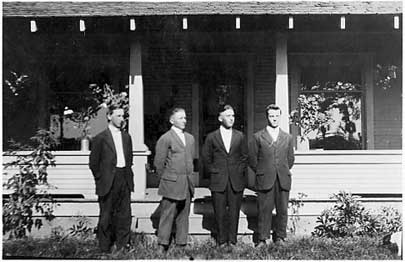 This photo shows four young Mennonite boys in front of an unidentified house. From left-to-right, the boys are Daris Eash (spelling?), Ben Kauffman, and the twins Joel Roth and Noah Roth. Noah Roth was our grandfather, the nephew of Hannah in the previous photo.

Here’s a detail of the above photo: 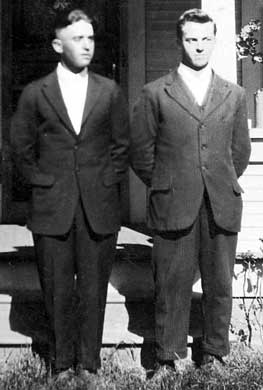 My grandfather, on the right, looks very much like my father did, and like I did when I was younger (and skinnier). It’s uncanny.

Jenefer has given Kris a pedigree chart showing family history on the Gates side back to the 1600s. I’ll have to get that data entered into my program. I think it’s fun that once again, as the winter sets in, I’m getting interested in family history. This is the third consecutive year I’ve had the bug to dig into my family roots.

I don’t know how to feel,Jd. Sometimes I almost feel like crying when I look at old photographs. The people were actually living vibrant people; just as alive as I am today. And yet now they are dead. Stone dead. Cold dead. It’s just so sad! Someday will someone find an old picture of me in an antique store and rush to buy it? Probably not. People are losing that sort of thing. What am I trying to say? It’s just that nothing seems to mean much to the generation that comes after us. They are too far removed from the ties that bind us to our history. There’s been so many changes in the world in the last 20 years what with the advances of technology and stuff it just seems that nobody cares anymore. Now it’s all hi tech. I better quit . I don’t think I’m getting across what I’m trying to say. I feel very nostalgic tonight. Nice pictures.

You need a stage piano like the Roland RD-700. Conveniently, I have one that I could let go at a better than fair price. 🙂

What’s up with that bowl-cut? I realize that all decades seem to have the crazy haircut that everyone likes, for example, the 80’s had the mullet. But I have to ask, what made men think that shaving off their hair an inch (or more)above their ears while leaving the top long actually looked attractive? It’s like an inverse donut cut – how scary is that?

You need a stage piano like the Roland RD-700.

Right, Drew, because you know I just happen to have $2000 budgeted for a piano…

Adults can learn, and learn well. I started playing bass when i was 26. I’d taken piano when i was younger (and was terrible at it), as well as French horn in middle school (again, i was terrible). Learning as a kid and sticking with it is like learning a language and sticking with it. But adults have something they may not have had when they were kids trying to learn- patience and the ability to attack problems from different angles than the obvious ones.

So, i’ve been playing bass for seven years, and also taught myself some guitar, some piano, some drums, some violin, and on the violin i retuned it a couple of different ways to work on aspects of the different, non-fretted strings like cello.

Basically what i’m saying is that is you have a yen to learn the piano, or any other instrument, don’t let anything stop you. An added, positive side effect to learning an instrument is that your singing will improve. 10 years ago no one would have expected in a million years that i would get on a stage, let alone play an instrument, or even sing a song, but i do all three now. And i make a bit of moolah here and there at it, too. 😉

I did take some courses at the local college, too, for playing. So if you have a community college with a music program, look into taking a couple of classes. A beginning theory class in conjunction with piano does wonders.