How often do you have nightmares? I don’t have them often.

Yet it’s 4:04 a.m. and I was just awakened by a dream in which I was screaming, screaming at a formless darkness in our television room, a shape that could only have been an intruder, a burglar, a possible murderer. 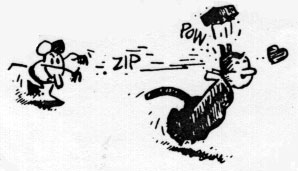 And my favorite, Little Nemo in Slumberland 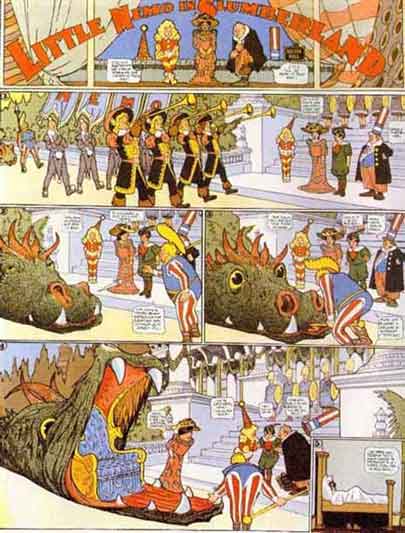 Little Nemo was written and drawn by Winsor McKay from 1905 to 1914. Its premise is that each night Morpheus, the king of the Slumberland, sends one of his minions to summon a young boy (Little Nemo) to his realm. The minion leads Nemo through strange and wonderful landscapes — a forest of giant mushrooms, a land of walking beds, a garden filled with monstrous vegetables — until finally something terrible happens — the giant mushrooms collapse at the touch of a finger! &mdash and Nemo wakes and falls out of bed screaming.

The stories are macabre and fantastic, the art a beautiful blend of art nouveau and art deco (traditionally, the division between these two periods is considered to be the start of World War I). 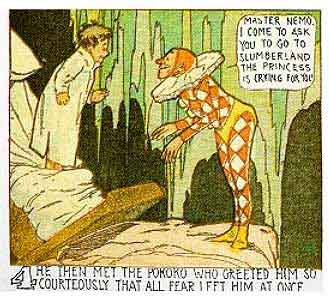 I showed Harrison some Little Nemo strips last night, though I altered the stories a bit. The illustrations seemed fantastic enough to fill his brain with wonder; I was afraid that the actual text of the strip might push the wonder into horror. (Harrison is a sensitive child.) After the Gingeriches had gone home, I read more of the strips before bed.

I was worried that Little Nemo might give Harrison nightmares — and maybe it did — but I should have been worried about myself.

Last night I dreamt that we had returned home from an evening out. Kris went to let the cats out and said, “Huh. Well, I guess somebody stole your bike.” My heart sunk. I’d had my bike chained up in the backyard, but sure enough, somebody had cut the chain and taken the bike. They’d left the front wheel, though, as they’d apparently bent the rim during the theft.

Then I noticed that I’d left the shed door open. Again, my heart sunk. When I checked, the shed was nearly empty. The thieves had stolen almost everything: the camping equipment, the empty CD cases (our CDs reside in binders, so we keep the cases in the shed), my old computer gaming magazines, the Christmas supplies.

“What about the house?” I thought. I ran to the library. One of the computers was missing. I went to the back of the house to check on the larder and on the television room. But when I entered the television room, I was startled to find a formless black shape, a menacing presence: the thief! I screamed! The figure came toward me with a knife! I screamed!

And then I awoke. Fortunately, I wasn’t actually screaming.

I rarely have nightmares. Maybe Little Nemo is more potent than I had suspected.

Little Nemo is worthy of its own weblog entry. Many of these classic comic strips are wonderful, and I want to share them with my friends. Unfortunately, most of my friends would find them uninteresting. I think it’d be wonderful if one or more of these old strips were reprinted alongside the modern comic strips in today’s newspapers.

There is no Ming but Max, and Middleton is his prophet…

I mean, really. How can you not like this guy and this guy? Geez, but Sam Jones looks like a dope in comparison, doesn’t he? Max von Sydow was brilliant casting. But Sam Jones as Flash? And making him a Football Player? Groan.

I’ve never read Little Nemo, but the art really reminds me of the illustrations for the original editions of L. Frank Baum’s works. I suppose they would fit into that Art Deco/Nouveau period?

There’s an issue of Promethea that’s done in this style as a conscious throwback/homage to Little Nemo. Little Margie and Promethea visit the Sun King, who is going to be marrying the Moon soon. But he’s lost the ring, so Margie and Promethea go about looking for it, eventually discovering that the ring wasn’t lost at all, but…

Well, I don’t want to ruin it in the off chance someone out there is going to pick it up and read it.

Nemo actually was reprinted in smaller form in the 1930s and 1940s, and again in the 1960s, very briefly alongside othe comics, but it can’t really be appreciated in abreviated form, and the full-page format is even less plausible in today’s comics sections then it was back in the 1960s.

The many fans of Little Nemo among modern strip creators are Patrick McDonnell, Gary Trudeau, and Bill Watterson.

A full-size reprint edition of the early strips is due out this fall.