I’ve been working a little with a PR rep lately, and it’s given me a glimpse into a new world — a world I don’t particularly like.

From my experience, sound personal finance tips are timeless. We may get tired of hearing them, but that doesn’t change the fact that they work. The reason they’re repeated so often is because they’re effective.

As a result, when I write about various aspects of personal finance at Get Rich Slowly, I tend to cover the same themes repeatedly. That’s just the nature of the beast. I try to explore topics from new angles or give added color, but there are only so many ways you can write about “buy low, sell high” or “spend less than you earn”.

In Search of the New…

The PR rep I’m working with feeds me potential interviews with reporters for major media outlets. I’m happy to provide help when I can. But some of the requests from the reporters drive me nuts. There’s a certain group that is after new! tips. I get that they want to have original content and share new ideas. That’s great. But a lot of this seems forced.

Here’s an example of one request I saw recently:

I am writing an article about money-saving travel trends for the Los Angeles Times.

These must be new, very different, a little over-the-top/fun, perhaps (not necessarily) green must haves an in this down economy angle travel-related ideas/services/products of interest to readers who may no longer have as much (or any) disposable income.

They can be related to hotels/restaurants/transportation, you name it, I’ll look at it if it fits my protocol above.

Please note: a little over-the-top, new, different are key requirements. For example, I dont want to hear about hotels that are offering a third night free type thing. Ideas that are creative, that might wow readers, are what I’m looking for.

I don’t mean to pick on this writer — which is why I’m not naming names — because this is indicative of the way many reporters approach stories.

The Forest for the Trees

I think this approach misses the point, and in a big way. When you emphasize novel saving ideas, when you go for over-the-top, you’re ignoring the methods that have been proven to work. Again, just because we’ve heard the same tips 20 times before doesn’t mean we shouldn’t hear them for a 21st.

I’m also bothered by how the financial media manufacturers its stories. (It’s not just the financial media — I’m just using that as an example because I’ve seen it first-hand.) Some outlets — especially television — go into a story with the end in mind: “Let’s write about somebody who bought a house and was duped into a subprime mortgage and now is facing bankruptcy!”

Again, maybe that makes for a compelling story, but it’s also sensationalistic. And it’s not telling the truth — not in the larger sense. That is, the media is telling the truth about that individual, but by focusing on him, they’re ignoring the 98% of the population who are in different circumstances. They highlight the extreme in an effort to shock us.

I saw this first-hand a couple of months ago when I made a short appearance on a major business television network. They asked me to write my story for them. It had to be something I could read aloud in under sixty seconds.

After I submitted my copy, one of the show’s editors worked with me for a couple of hours to refine the script. “Can we say this?” she’d ask, as she altered sentences. What she wanted me to say was true, but it was emphasizing all the wrong things.

When we were finished with the revisions, there was nothing in the piece about Get Rich Slowly, which is the single most important factor in my financial turnaround. It was like telling the story of Little Red Riding Hood without mentioning the wolf while emphasizing the fabric of the hood. 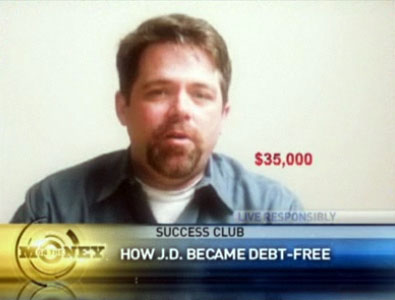 Earlier this year at the old Foldedspace, I wrote about this experience:

These stories are manufactured, just like a cardboard box. They’re not reported. The “journalists” create the story they think their audience wants, and when they contact me, I’m just an ingredient

Bill, one of the fellows working with me, listened to my complaints, and then he said, “J.D., you can’t look at it like that. You can’t expect it to be straight reporting because it’s not. You have to think of it like sausage. What they’re producing is sausage. The media is a giant sausage factory. You don’t want to know what goes into the sausage or how it’s made. You just have to trust that what comes out at the other end tastes good.”

If I want the Truth, I turn to blogs. I know that I may not be getting truth from them (meaning they may be disguising bits of info, like names and dates, in order to protect friends and family), but I’m getting the Truth (meaning they’re not lying to me about the Big Picture). To me, this is more important.

Traditional media often gets on its high-horse when talking about blogs because “bloggers don’t have to meet rigorous fact-checking standards”. I’m sorry, but that’s bullshit. What does it matter if you get the facts straight, but you’re totally distorting what they mean? Plus, I’ve had enough reporters screw up the facts I give them to know that they’re no more reliable than bloggers.

Old media is dying. I, for one, will not mourn its passing.

Update: Via Nicole: The corporations that own our largest media outlets are controlling and censoring the content of their news organizations based on the unrelated interests of the parent corporation. It’s not exactly what I wrote about above, but it’s pretty damn close. It’s another type of processed meat.