I’m not generally fond of costume parties, but Denise and Lynn made it clear that costumes were mandatory at their Halloween party. Besides, Denise had suggested the perfect costume idea. 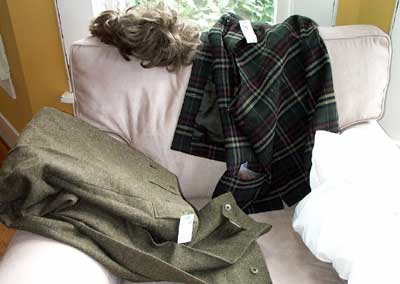 Then I checked the nook for other bits and pieces: 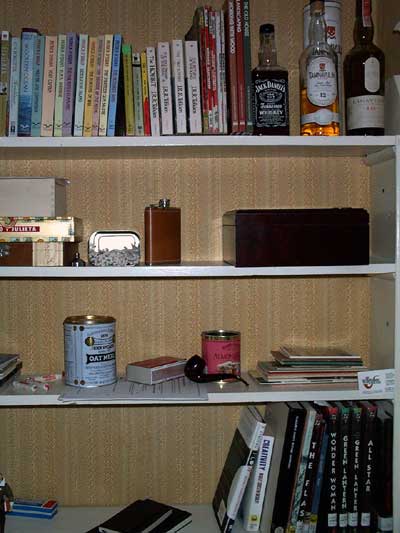 Pipeweed! And a pipe with which to smoke it! A flask filled with spirits! A bit of cheese and salmon from the fridge, a walking stick cut from the locust, and I was transformed from J.D. Roth, middle-aged humbug:

Kris chose a quick-and-dirty costume not far removed from reality: a hazmat worker.

Denise’s house was well decorated: spooky spiderwebs glowing under a black light, a cardboard coffin, the hall of Halloween candy horrors, a great forest mural thing, and various dismembered limbs. And, of course, there was plenty to eat, including some delicious Mexican beef and chocolate sheet cake. I cannot — and did not — resist chocolate sheet cake.

It was a pleasure to meet Betsy and Scott, and to chat with them about their lives. Here are Scott (with his party pooper award), Denise (in her fantastic vampiress costume), and Betsy (as The Media). 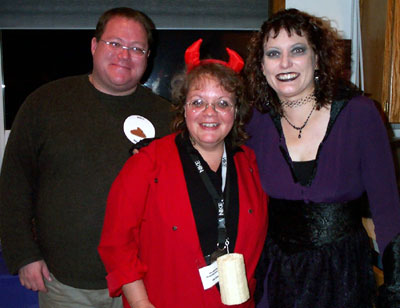 I must have made a convincing, if tall, hobbit. Despite some other great costumes, my hobbit won the costume contest, and I came home with $10 in lottery tickets (which yielded $4) and a trophy. I wonder if I can use the same costume next year…

I was disappointed that I didn’t get a chance to use my prepared spiel. I wanted for somebody to say, “I thought hobbits were short,” to which I would reply, “That’s a myth. A vile, nasty rumor started by dwarves — no surprise there — as a means to distract from their own height issues. As you can see, hobbits are actually as tall as humans.”

I crack myself up.

We left the party early spend some time with the Gingeriches. Jenn told us three amusing Halloween anecdotes:

We had a nice time with Jenn and Jeremy, then drove home for an extra hour of sleep.

I am a man of many quirks. One of these is that I prepare for the coming or going of Daylight Savings Time in advance. At least a month before we’re supposed to adjust our clocks, I adjust mine. This year was no different. And all day Saturday I was joking to Kris, “My watch is almost right.” Well, we had a power outage Friday afternoon. I didn’t correct my clock until Saturday night before bed, and when I did, I set it from the computer’s clock. Can you guess what happened? That’s right: despite all my careful planning, I failed to make the correct adjustment for Daylight Savings!. Oh, the bitter irony.

This being our first Halloween in the new house, we didn’t know what to expect. There aren’t a lot of kids in the neighborhood, so it wouldn’t have surprised us to have nobody visit at all.

At 5:57 tonight, we got our first trio of Trick or Treaters. Kris answered the door. The first child, a boy, was obviously a vampire. The second kid was Hermione Granger. The third child looked like a princess, but here face was ashen white. “Are you a princess?” Kris asked.

What? Are these dead female icons representative of some proto-feminity rampant among girls today? Are they mimicking some point of popular culture we’ve missed? What’s going on?

At 5:59 we were visited by a second pirate girl. And death.

A three-year-old biker in a Harley-Davidson jacket visited us at 6:19. He almost looked like a pirate. Maybe he was a pirate biker?

“Are you a dead princess?” I asked the girl.

“She’s got older brothers,” her dad said, as if that explained the whole thing.

Things have slowed down in trick-or-treat land here at the Woodruff/Jolstead house, but for a bit it was crazy. Cutest costume award goes to the 6-month old bassett hound puppy dressed up as a ladybird beetle. Lots of supermans and spidermans and live princesses, no dead ones.

Uhhh. We were just visited by a pimp, who was probably all of 8 years old. I don’t think that there are enough bytes out there in foldedspace to accommodate everything I’d like to say about that…

p.s. Everyone go look at Lisa’s latest entry for a movie of Albert the Batboy toddling (and chortling) down the street. Very cute.

Alas, we had NO trick-or-treaters at all! Despite a new, brighter bulb in the porch light and our terra cotta pumpkin aglow, nobody came to the door! 🙁

we had NO trick-or-treaters at all! nobody came to the door! 🙂

I am waiting for my delayed flight to Baltimore. At least the airline called (at midnight) and left a message that it was delayed so that I am not waiting at the airport.

We had over 150 kids. There were lots of Spidermen and random dead things. There was even a kid dressed as the ‘Incredibles dad’. Amazing that you can get a costume for a move that is not open yet.

Rich had put up black lights, a cemetery in the front yard and lots of spider weds that all glowed in the light. The kids love the glow, but it makes it hard for me to figure out some of the costumes.

I smiled to think back to when I was growing up. I do not think that I ever worn a store bought costume. Mom made everyone that I can remember. I will have to ask to see the old photo albums someday. There seem to be very few home made costumes out there. If they are home made the are wear something black or white and put blood in it.

The churches around here call the ‘Autumn Fest’ Parties.

To be fair, judging from Jenn’s recent entry, Zion calls their Halloween party a harvest party, also. Kind of a strange way to celebrate the harvest, though, to have the kids dress up just like they would for Halloween. 🙂

And yes I know that the Wikipedia calls the incorrect use of the plural a “common alternate form”, but that doesn’t mean it’s proper English.

Must be California. We had lots and lots of trick or treaters. I think I started with a minimum of 1,000 pieces of candy and we only had 20 or 25 left. I think Bob and Adam give out handfuls instead of just a few to each, but still there were lots of kids. I think the thing that made us the happiest was that there were very few unaccompanied children. Most had parents and were in large groups of 7 to 20 costumed participants. Best costume was a toddler, about 1 year, in a homemade Eeyore. Really cute.

It is such fun to not have any little ones to take out any more!!!

You do, however, look surprisingly hobbit-like. But you need a bigger gut to carry it off completely. Are you sure you don’t want to play a hobbit in the campaign (should we ever meet again)?

Those who did not participate had to wear a Party Poo-per sticker, complete with cartoon pile of dog doo.

We had some great costumes show up!

JD, have you taken a good look at your hobbit picture. You look just like dad.

JD, have you taken a good look at your hobbit picture. You look just like dad.

Ha! All your preparation! For nought! Ha!

Where I was at, a wedding reception, the Daylight SavinG hour spontaneously became a “It doesn’t matter how much you drink during this hour!” hour. Which, fifty-nine minutes later, when a certain fellow I went to college with fell over and threw up, turned out to be all hype.

Tony (the traitor): JD, have you taken a good look at your hobbit picture. You look just like dad.

Yes, yes, I know. I thought the very same thing when I saw the photo this morning. And I’m more scared by that than you are! 🙂

And the photo of Kris’s costume is … Where?

OH MY GOODNESS! I scrolled down here to make the comment and lo and behold I see i’m not alone. Jeff has noticed it too.

JD you look just like Uncle Steve. I was shocked when I saw the pic. For a minute I thought it was a hoax. I have never seen the beat of it. It’s amazing!