Stéphane Heuet is adapting Proust’s Remembrance of Things Past (a.k.a. In Search of Lost Time) into a twelve-volume graphic novel. (A definition: graphic novel == comic book with pretensions of greatness.) He has completed three of the volumes, adapting the first two parts of the novel, Swann’s Way and Within a Budding Grove. 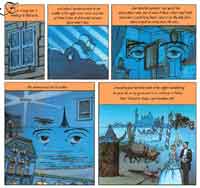 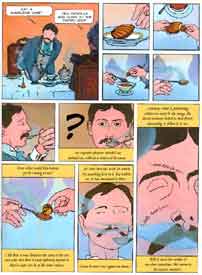 The early reviews for Heuet’s adaptation were poor. The consensus seemed to be that it was insanity to attempt such a feat: how could Proust possibly be conveyed in a comic book? And what of the art? How dare Heuet iconify Marcel and Swann and Françoise and Albertine; his art — so-called — is nothing more than pastiche of Hergé‘s Tintin. Tintin and Proust? Bah!

Regardless the opinion of the professional critics, Heuet’s aims are admirable. Moreover, he succeeds in distilling a certain essence from Proust’s prose. He does not capture everything, to be sure, nor would I expect that of him. Instead, he’s managed to effectively dramatize the central narrative while touching — but only touching — upon some of Proust’s philosophical digressions. 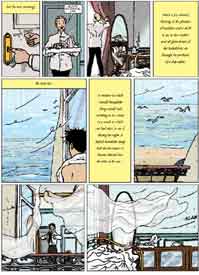 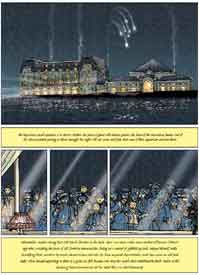 I wish that more classic literature was given this sort of attention. Heuet’s project might be reminiscent of Classics Illustrated (which, no surprise, I enjoy), but it takes the formula to another level. Certainly other classics cry out for similar treatment.

I’ve been pleased with what little Proust I’ve managed to read so far (which comprises only the first hundred pages of Swann’s Way, the first of seven volumes in his mammoth novel). Yet nothing I’ve yet read matches the promise present in the final part of Heuet’s adaptation of Within a Budding Grove. 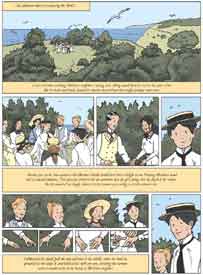 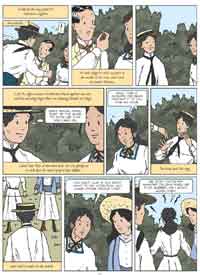 It is here that the narrator becomes obsessed with, and pursues the attentions of, a little band of girls, most particularly the glowing Albertine, she of the “brilliant, laughing eyes and plump, matt cheeks”.

Heuet does a marvelous job at conveying the adolescent games that the narrator plays with these girls (and they with him), at drawing the growing affection between Marcel and Albertine, affection which alternates with (seemingly) arbitrary dismissal. How true their actions feel, so much like a similar boyhood romance of my own, one which also failed to reach fruition due to inopportune resistance on the part of both myself and the object of my affection, many times, over the course of many years. (One should not read this bit of nostalgia as regret, however; it is simply nostalgia.)

And surely the original Proust is even better, yes? I am eager to discover.

Here is the relevant portion of the text: Seascape, with frieze of girls, though the odds that anyone will follow this link, and read from the text, are slim indeed. Perhaps a quote is in order (emphasis is mine):

No doubt, all their faces had assumed quite new meanings for me since the manner in which they were to be read had been to some extent indicated to me by their talk, talk to which I could ascribe a value all the greater in that, by questioning them, I could prompt it whenever I chose, could vary it like an experimenter who seeks by corroborative proofs to establish the truth of his theory. And it is, after all, as good a way as any of solving the problem of existence to approach near enough to the things that have appeared to us from a distance to be beautiful and mysterious, to be able to satisfy ourselves that they have neither mystery nor beauty. It is one of the systems of hygiene among which we are at liberty to choose our own, a system which is perhaps not to be recommended too strongly, but it gives us a certain tranquility with which to spend what remains of life, and also — since it enables us to regret nothing, by assuring us that we have attained to the best, and that the best was nothing out of the common — with which to resign ourselves to death.

I had now substituted, in the brains of these girls, for their supposed contempt for chastity, their memories of daily ‘incidents,’ honest principles, liable, it might be, to relaxation, but principles which had hitherto kept unscathed the children who had acquired them in their own respectable homes. And yet, when one has been mistaken from the start, even in trifling details, when an error of assumption or recollection makes one seek for the author of a malicious slander, or for the place where one has lost something, in the wrong direction, it frequently happens that one discovers one’s error only to substitute for it not the truth but a fresh error. I drew, so far as their manner of life and the proper way to behave with them went, all the possible conclusions from the word ‘Innocence’ which I had read, in talking familiarly with them, upon their faces. But perhaps I had been reading carelessly, with the inaccuracy born of a too rapid deciphering, and it was no more written there than was the name of Jules Ferry on the program of the performance at which I had heard Berma for the first time, an omission which had not prevented me from maintaining to M. de Norpois that Jules Ferry, beyond any possibility of doubt, was a person who wrote curtain-raisers.

No matter which it might be of my friends of the little band, was not inevitably the face that I had last seen the only face that I could recall, since, of our memories with respect to a person, the mind eliminates everything that does not agree with our immediate purpose of our daily relations (especially if those relations are quickened with an element of love which, ever unsatisfied, lives always in the moment that is about to come)? That purpose allows the chain of spent days to slip away, holding on only to the very end of it, often of a quite different metal from the links that have vanished in the night, and in the journey which we make through life, counts as real only in the place in which we at any given moment are. But all those earliest impressions, already so remote, could not find, against the blunting process that assailed them day after day, any remedy in my memory; during the long hours which I spent in talking, eating, playing with these girls, I did not remember even that they were the same ruthless, sensual virgins whom I had seen, as in a fresco, file past between me and the sea.

If I dote on Proust, it’s only because he has, in the small portion I’ve read of him and about him, impressed with me with his artistry, his sensitivity, his perception. I feel — and this itself is a Proustian observation — that he is able to articulate certain feelings, certain emotions, in language that I could never hope to achieve.

Proust is not for everyone. His writing, though elegant, is dense, and requires patience to parse. Yet for those willing to persevere, the rewards are great.

Regarding my road to recovery:

At present these are the doctor’s orders: no driving, weight-bearing activities (such as walking) only with the brace locked at full extension, brace unlocked to allow flexion when seated, and physical therapy three times a week.

How am I coping with these requirements?

I’m driving, but only about town. I’m performing weight-bearing activities with the brace open to ninety degrees (though I’m quite careful), and will occasionally walk short distances on the knee without a brace. I’m going to physical therapy three times a week (and performing the assigned exercises three times per day).

The physical therapists seem to think I’m making good progress, too. They said they don’t generally see ACL patients until the fifth or sixth week after the surgery, and that I’m actually ahead of most recoveries (I’ve been worried that I’m behind.) They warned me again that I’m at high risk of reinjury because the quick healing makes me prone to overconfidence. They’re right.

Best of all, tonight will be my last session in the continuous passive motion machine (a.k.a. The Rack). It gets taken away tomorrow.

I worked a full day yesterday, and will work close to a full day today. I have a tendency to bump into things, or to twist my leg/brace a bit, which caused a bit of trouble, but the experience is mostly a positive one. I’m less content today than yesterday; my knee is sore, and I have the chills.

And what makes you so sure that no one will follow the link. I follow almost everyone of your links if they have to do with a book. now if it has something to do with music or computer programs I don’t. But this link Iwould have definitly clicked on.

Exhibit A
these are the doctor’s orders: no driving, weight-bearing activities (such as walking) only with the brace locked at full extension, brace unlocked to allow flexion when seated, and physical therapy three times a week.

Exhibit B
The physical therapists… warned me again that I’m at high risk of reinjury because the quick healing makes me prone to overconfidence. They’re right.

Exhibit C
I’m driving…
I’m performing weight-bearing activities with the brace open to ninety degrees…
[I] will… walk short distances on the knee without a brace.
I’m going to physical therapy three times a week

So, you’re following one of your doctors four orders and your knee is sore. Just how dumb are you intent on being? :/

Remember the root canal. This is far more serious.

Bah, I say live now, you can always afford a wheelchair later on (I’m being sarcastic, of course).

I think Heuet’s graphic novel is a noble failure. The question of whether a visual medium can equal or better print in depicting mental states is certainly a live one, but Proust is, at times, so deeply abstract that he makes the limitations of the comic form pretty glaring. E.g. the panel wherein the narrator is sampling the tea and madeleine. Somehow the big ‘ole question mark hovering next to his somewhat quizzical face doesn’t make me want to return my library copies.