“You need to put up something different at foldedspace,” Kris told me tonight when I went upstairs to tuck her in. “It’s been a week since your car trouble. You sound all suicidal and stuff.”

I lay down and began: “Once upon a time, on a planet far far away, there lived a race of people devoted to pure intelligence. These people were believed to think the most sublime thoughts in the galaxy. But there was one problem: they were so devoted to intellect that they neglected their physical nature. They evolved into ugliness. In fact, they were so ugly, that it was said any human who set eyes upon a Medusan — they were called Medusans — would go insane.”

“Is this Star Trek?” asked Kris.

“One day, a spaceship called upon the Medusan planet to pick up its ambassador and his companion, a human woman who had not gone insane from looking at these ugly people. Why hadn’t she gone insane? She was blind.”

“On board the spaceship, there was only one man who could be trusted to deal with the Medusan ambassador. The first officer, you see, was only half human, and with the proper visor over his eyes, he would not be driven insane.”

“I knew it. It is Star Trek,” Kris said, laughing.

I paused. “Yes, I guess it is,” I said, as if I hadn’t just watched this particular episode fifteen minutes before. “And it’s a long story, I realize now. In fact, it’d probably take fifty minutes to tell it to you.” An episode of Star Trek lasts fifty minutes.

Kris laughed. “Why don’t you just give me the summary.” And so I did. 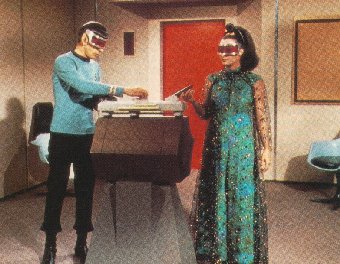 “I don’t know why you watch that show,” she said when I had finished. “It’s not very good.”

“Well, you’re mostly right. Most of the episodes are average. But some of them are great. I really liked this episode. It was very science fiction-y. My favorite episodes are those with stories that don’t have to exist in the Star Trek universe. This was one of those.”

“And what was the one with the gangsters?” Kris asked. I made her watch “A Piece of the Action” with me a couple weeks ago.

“The one with the gangsters was just bad,” I said.

“They’re all bad,” muttered Kris as I kissed her good night.

And I went downstairs to watch another episode…