Instead, I live a world where my mother’s descent into mental illness has once again reached a crisis. And although my family is better prepared for it this time — we have the power of attorney in place, we have a list of Mom’s medications and phone numbers for her doctors, we’ve been researching live-in care and assisted-living facilities — we’re still not as prepared as we should be.

The difference this time is that everyone, including the doctors, is taking this seriously, and we’re devoting all our time and energy to finding a solution.

My mother has struggled with mental health problems for over a decade. Three years ago, she took a turn for the worse and spent three weeks in the psych ward of a local hospital. When she was released, she was fine. In fact, she was better than I’d seen her in years.

Since then, she’s had a handful of relapses. After the most recent crisis in January, I wrote about the difficulties of caring for aging parents, and I asked GRS readers for advice. I acted on some of it. We had a power of attorney drafted and Mom drew up a basic living will. We started to discuss what might happen in the future. But we never finished the process completely. When Mom’s health improves, we tend to become complacent. It’s tough to push her to prepare for when she’s non-functional when, at that moment, she seems fairly cognizant.

Lately, though, Mom has become more and more disoriented. She’s confused. She doesn’t know what the date is, and often can’t remember things we’ve told her just hours before. (Or seconds before.) When we noticed that she wasn’t taking her medication properly (she was taking it mostly at random, often days in advance of when she ought to), we took her to the doctor. The doctor agreed there was cause for concern, but couldn’t find anything medically wrong with her. As a family, we began to check on her daily.

Over the past few weeks, Mom’s condition has continued to decline. She hasn’t been taking care of basic hygiene. She hasn’t been eating. She still can’t take her medication at the right time. It had just occurred to us that perhaps she shouldn’t be driving when Mom called to let us know she’d driven through the back wall of her garage. We took away her keys.

Last Thursday, I flew to Colorado for the first of two weekend conferences. Before I left, I made plans to research ways to help Mom upon my return.

But on Friday, as the first conference was beginning, I learned that Mom’s doctor had ordered her to be admitted to the hospital. My wife and my brother were with her. I debated flying home, but Kris told me everything was under control.

Throughout the weekend, my family sat with Mom as the doctors tried to figure out what was wrong with her. But neither the internist nor the psychiatrist nor the neurologist could find anything specific that was the matter. “They’ve given her a diagnosis of ‘altered mental state’,” Kris told me by phone. “Which is code for, ‘we don’t know what the hell’s wrong with her’.”

On Monday, as I was preparing to speak on a panel at a conference in Seattle, Mom’s internist called to give me a run-down of her condition. After talking with him and talking with Kris, I decided to cut my trip short. I had planned to stay another day, but instead I finished my talk, hopped on a train, and went to the airport to ask to fly home to Portland immediately. (On a lighter note, it turns out my good friend Chris Guillebeau was on the same flight, returning from his latest round-the-world jaunt.)

On Tuesday, I joined my brother Jeff at the hospital. We sat with Mom for four hours, talking to her and talking to the nurses and doctors. Still they couldn’t give us a diagnosis. What they could tell us, however, was that there was no medical reason for her to remain in the hospital, so she was going to be discharged within a day. And after discharge, she was going to require round-the-clock care.

Mom is only 63, but her short-term memory is essentially non-existent. She can tell you what happened 20 years ago, but not what happened 20 minutes ago. Or 20 seconds ago. Perhaps worse, she has trouble articulating the thoughts in her head. It’s clear her mental faculties haven’t completely vanished, but she’s unable to convey what she’s thinking. She has aphasia. And, as of Tuesday afternoon, the doctors have decided to label her condition as dementia. (Though, again, this seems to be a catch-all for things they can’t define.)

Armed with this knowledge, and feeling the pressure to find a solution fast, we spent most of Tuesday researching options such as live-in care and assisted living facilities.

One by one, our top choices fell away. There’s really no way for Mom to live with any of her three sons. It’s cost prohibitive to hire full-time care fo her, and even if we did, the caregiver might not be able to do some of the things we’d like. We can’t place her in a lot of programs because she doesn’t qualify. She makes too much from the box factory, or she’s too young, or she lacks the required diagnosis.

After some research, my brother discovered an assisted living facility just ten minutes from his house. Best of all, this place specializes in “memory care”.

So, Jeff and I gave Happy Acres a tour. Having nothing to compare it to, it seems fine. The memory unit is isolated from the rest of the building, and the patients given special care. Happy Acres is nice — but sad. These folks, who were once vibrant and interesting, are now shells of themselves. Also, they’re all 75. Or 85. Mom is 63. Sill, this seemed like a great place to watch her while we see if she improves. Here, she’s close to us. Here, she’ll have folks dispensing her medicine and helping her eat healthy food.

After weighing the options, we decided Happy Acres was the best bet, even if it is expensive.

A Handful of Stuff

Last night, my brothers and I (and our wives and kids) met at Panera Bread near the hospital in order to plan Mom’s future. Where will she live? For how long? What will she take? Who will pay for the service? Who will pay her existing bills? What will happen to her cats?

During this most recent crisis, Mom’s financial skills have vanished. She’s been sending two checks for a single bill. Or sometimes she doesn’t send them at all. When she does write a check, the numbers are sometimes random. Here’s a glimpse at the gibberish she wrote in her checkbook register last month: 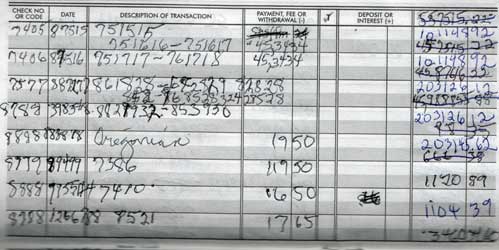 The gibberish in Mom’s checkbook register.

After our mediocre (but costly) dinner, the family headed into the nearby mall to buy some basic things Mom will need when moving to Happy Acres this morning. We bought her bedding, a mattress set, towels, and more. This morning, instead of going to Crossfit, and instead of writing or studying Spanish, I’m helping my brothers set up her new living space in a small room very much like a college dorm. Her entire life (or the physical aspect of it) is being reduced to the bare necessities.

Note: We’re now very glad we had a power of attorney drafted after Mom’s last crisis. It allows us to use her funds to buy the mattress, etc. In fact, all of the various legal documents we assembled will make this process easier.

Meanwhile, the entire family plans to work together to sort through the remains of Mom’s normal life. I think the women plan to purge her house and clean it from top to bottom. Jeff and Tony are talking about repairing the garage. I’ll figure out how much money she has in her checking account (almost certainly not the $200,000 she has noted in the checkbook register), and I’ll cancel accounts and services she no longer needs.

All of this is complicated by our existing plans. Kris and I leave for Alberta in a matter of days. Jeff and his family are headed to British Columbia upon our return. Tony has plans of his own. How do we juggle what we want to do with what we ought to do? So far, we’re working together to make things right. But there’s a good chance I’ll have to cancel my trip to England in August. I’ll try to see it through, but if my family needs me here, I’ll stay in the States.

So, I have some great posts in the works for Get Rich Slowly, but they’re going to be late. And there may be some blanks spots in the posting schedule over the next week. I’m spending most of my time with Mom, not on the computer. (My goal is to do both, if possible.) Take care!