My wife and I have spent the past several days in western Alberta, tucked high in the Canadian Rockies. Every few years, we join her family for a group vacation. In the past, we’ve visited Alaska, San Francisco, London, and New York. This year we chose Banff (population 7600), the highest city in Canada (at 1383 meters above sea level).

The scenery in Banff National Park is stunning. Words can’t do justice to the views — and neither can my photos. The Canadian Rockies stretch from horizon to horizon. Jagged peaks burst abruptly from the earth, towering above the pine forests below. Here and there are rivers and lakes colored a creamy turquoise blue. (This captivating color comes from “rock flour” carried by glacier melt-water.)

I’d love to say my photographs captured the majestic beauty of the mountains, but they don’t. This is the best I’ve managed so far (though I plan to keep trying): 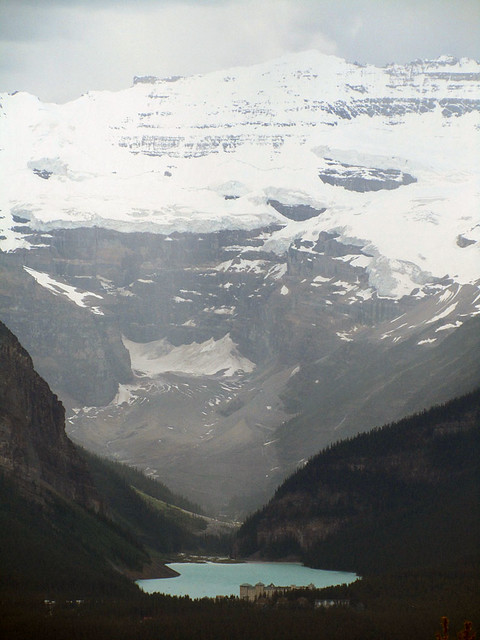 Lake Louise, as seen from the gondola on the opposite side of the valley

Kris and I drove from Portland to Coeur d’Alene on Friday, and from Idaho to Banff on Saturday. On Sunday, we joined her family to explore the town and the surrounding area. On Monday, we drove the 58 kilometers north to Lake Louise.

Like everything else in the area, Lake Louise is gorgeous: Its glacier-fed waters are the same creamy turquoise found elsewhere in the region; mountain peaks (and Victoria Glacier) tower on three sides. There’s pine forest all around. 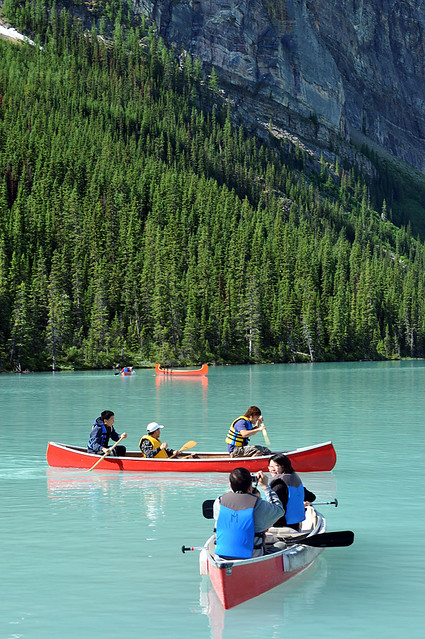 Canoes are popular on Lake Louise, especially on a sunny day.

On a sunny summer day like this one, tourists are everywhere. Some sit on the patio of the nearby chateau, sipping tea. Others rent canoes to paddle on the lake. But most pick one of many trails to hike and explore. Kris’ parents decided to take the easy stroll along Lake Louise, while Kris and I joined her sister and her husband for a more strenuous hike.

We had two options. We could:

I was eager to do the longer hike, but my companions preferred the shorter route. Besides, Kris’ parents would be finished with their walk along Lake Louise in about an hour. If we were gone for four, they’d have a lot of time to kill. No worries — we set out for the Lake Agnes Teahouse. 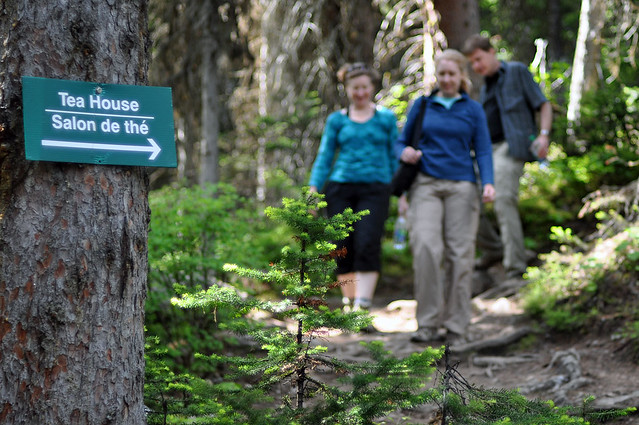 Tiffany, Kris, and Paul on the well-marked (and well-traveled) path to the Lake Agnes Teahouse.

The path from Lake Louise to Lake Agnes is wide and well-trodden. There were many other hikers on the trail. Some were serious: they moved swiftly with their trekking poles and hiking boots. Others were more casual, making their way to the top in flip-flops.

About one-third of the way to the top, we reached the first switchback; here a small clearing in the trees allowed us to catch glimpses of the boaters on Lake Louise below. Two-thirds of the way to Lake Agnes, we stopped briefly at Mirror Lake. We would have rested longer but the mosquitos were out in force. Instead, we hurried on.

Note: When traveling, I almost always carry insect repellent with me. (I’m a fan of Ben’s wipes, which are like moist towelettes soaked with DEET.) For some reason, though, I left my insect repellent behind for the excursion to Lake Louise. I paid dearly for that mistake. 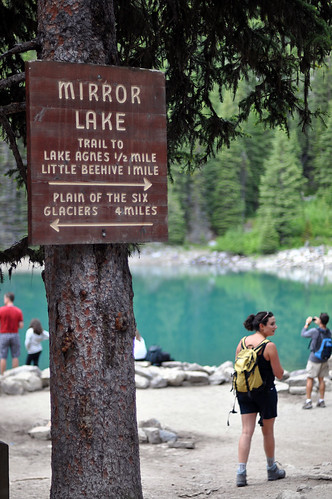 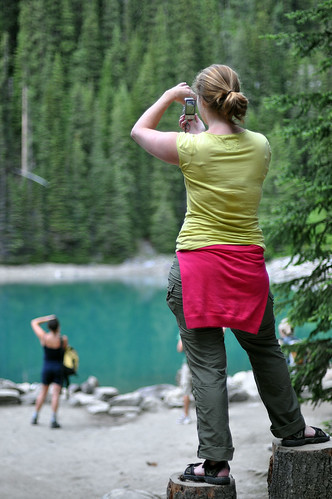 We stopped for a break at Mirror Lake; the bloodthirsty mosquitos forced us to resume climbing.

Aside from the mosquitos, the most difficult part of our hike was the elevation. Though it’s a constant climb from Lake Louise to Lake Agnes — there’s no up-and-down as on some mountain trails — the pitch isn’t severe. But because the trail is a mile above sea level, even fit folks can feel out of breath.

After about an hour of hiking, we reached Lake Agnes, a serene spot tucked into a bowl formed by a series of mountain peaks. The Lake Agnes Teahouse sits on the near shore, and is a popular destination with hikers. The teahouse offers 100 varieties of loose-leaf tea, but also provides snacks, light meals, and other drinks too. 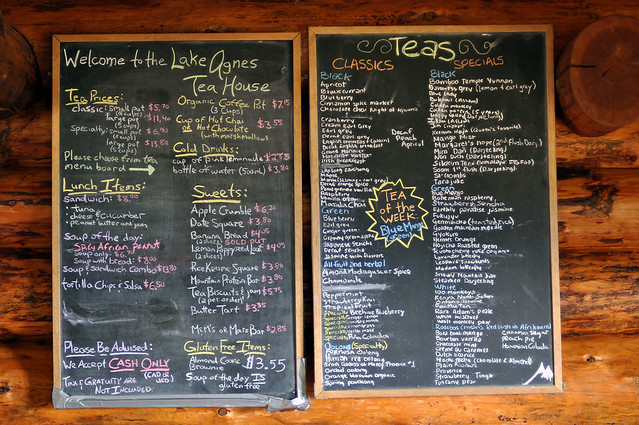 I enjoyed a tuna sandwich and a bowl of “spicy African peanut” soup, which I washed down with a pot of lapsang souchong tea. (Since I don’t like coffee, I often drink this smoked tea from China. I like it so much that I buy it in bulk.) Given that the Lake Agnes Teahouse has only a tiny kitchen (and no electricity!), the food was surprisingly good, especially the oatmeal brown bread (which is baked fresh every morning). The only drawback was the cost: $5.70 for the pot of tea and $13.80 for the soup & sandwich combo. That’s $19.50 (or about $21 U.S.) for a simple meal! We agreed the price was worth it, though — a fitting reward for our efforts.

Note: The Lake Agnes Teahouse accepts only cash (or travelers checks). Because there’s no electricity, you cannot pay for your snacks with plastic.

Before we left the Lake Louise Teahouse, Kris and Tiffany played scofflaw by feeding a granola bar to the chipmunks lurking nearby. 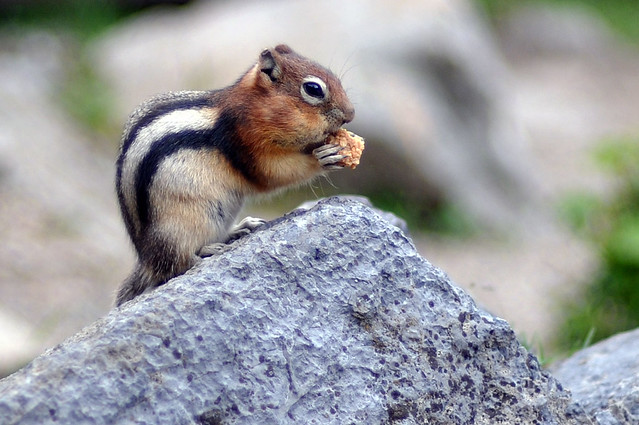 Kris and Tiffany disobeyed the signs and fed the wildlife.

On our descent, we were plagued by even more mosquitos than before, which hardly seemed possible. Brave Paul allowed one of the little devils to suck his blood while I snapped a photo of the only predator we’ve seen so far in Alberta. 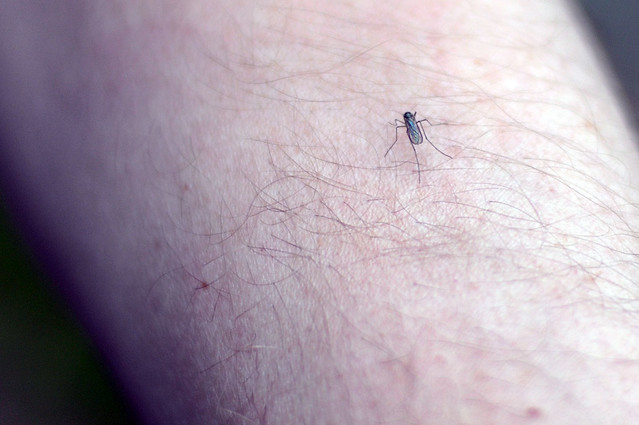 Paul fed the wildlife too. It was impossible to not feed the mosquitos.

The climb from Lake Louise to the Lake Agnes Teahouse was excellent exercise, and the weather perfect. Plus, the meal at the teahouse was memorable. We had fun. I do wish we’d done the Plain of Six Glaciers hike, but traveling with groups requires compromise. Besides, this gives me a reason to come back to Lake Louise sometime in the future, right?