We had dinner with our friends Chris and Cari on Saturday night. Michael and Laura joined us. And, of course, the kids were there: Kaden, Ethan, Emma, and Sophia.

Kaden is nearly seven, and has begun to exhibit strong personality traits. He was born on Leap Day, and so I always kid him about his age. “You’re still only one,” I say. “You’ll be two soon.” The other night he frowned a little and told me, “That’s not really funny anymore.” Touché! He likes his tropical fish, and he loves his Legos. I think he’s a great kid. (The other three kids are great, too, but this entry is about K.C.)

While at dinner Kaden commented that he liked salt. Kris told him how I have a habit of eating salt when I’m very, very hungry. We’ll be sitting in a restaurant waiting for our food, and I’ll tide myself over with a touch of salt from the shaker. Kris thinks it’s strange, and I suppose she’s right.

Anyhow, K.C. was effusive in his praise of salt, so I took a page from Craig‘s book. I’ve created a salt sampler for him from the various flavors in my library, and I’ll mail it to him later today. 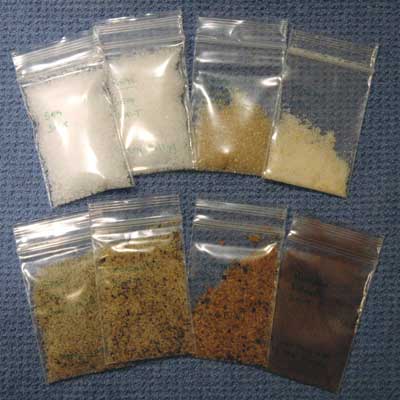 The flavors I sent him include:

The herbed salt came from Amy Jo (who has recently resurrected From a Corner Table). Craig and Amy Jo appreciate my love of salt, and encourage it with salty gifts from time-to-time. And now I’m passing these gifts on to the next generation of salt-lovers.